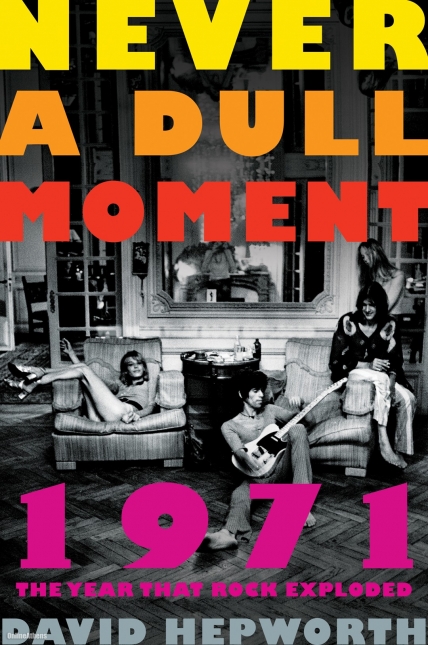 Scientists tell us the reason I stubbornly insist Hall & Oates’ 1980 chart-topper “Kiss on My List” is one of the best songs ever recorded is simple: My brain’s musical taste ossified at age 17. According to John Powell’s Why You Love Music, psychologists have demonstrated that we consolidate a lot of our preferences for things from favorite toothpaste to music in our late teens and early twenties. Hence, Hall & Oates.

“Although most nineteen-year-olds are convinced that the music they and their friends listen to is simply the best music there has ever been, it takes only a few seconds’ thought (about ten years later) to realize that this can’t be objectively true,” says Powell.

I’m still waiting for that to happen, and so is music journalist David Hepworth. His Never a Dull Moment is a fun, in-your-face declaration that 1971 was the most explosive year for rock music. Ever. End of discussion.

Hepworth allows that at age 21, in 1971, he was ripe for this kind of deeply held belief to grip his young mind and cling tightly for decades. Your brain might champion a different year, but that’s your problem. “There’s an important difference in the case of me and 1971,” he explains with a cheeky self-awareness. “The difference is this. I’m right.”

Fair enough. Part of the fun of examining lists is to disagree with them. “Citizen Kane” as best movie ever? Sure, why not? Ulysses as best novel? Guess I’d have to read it first. But 1971 as rock’s most explosive year? Not so fast. What about 1956 when Elvis Presley, Chuck Berry, Little Richard, and other pioneers hit the scene? Or 1967, the year “Sgt. Pepper’s Lonely Hearts Club Band” helped to usher in a new flavor of psychedelic pop? (Based on Hepworth’s chronological trajectory, I’d be defending 1984 as the best ever year in music, but I was never, then or now, so delusional.)

Hepworth does make a sound and engaging case for his year. Like a savvy attorney, he knows how to present his strongest evidence with understated confidence. Here’s a quick rundown of some ‘71 releases: The Rolling Stones’ “Sticky Fingers”; John Lennon’s “Imagine”; the Who’s “Who’s Next”; Marvin Gaye’s “What’s Going On?”; David Bowie’s “Hunky Dory”: Carole King’s “Tapestry”; and Elton John’s “Madman Across the Water.”

Led Zeppelin, Rod Stewart, Judy Collins, Sly & the Family Stone, and a bunch of others had pretty good years, too. You could certainly stack 1971 up against any other year and give it a serious run for its money.

Month-by-month Hepworth nimbly walks us through the year, beginning with January’s “Domino” by Van Morrison, and ending with the December release of Don McLean’s “American Pie.” The man knows his stuff. He intersperses, sometimes illuminatingly and sometimes a bit clumsily, relevant themes in music and pop culture and generally keeps the narrative humming along like a good tune.

For example, he insightfully notes that Presley’s 1971 live concerts, by then crammed with distracting spectacles like light shows, elaborate stage sets, and a reliance on songs from the singer’s earliest days, foreshadow the similar mega concerts we get today from the Who, the Stones, Paul McCartney, and the like.

Speaking of McCartney, Hepworth maintains the sixties actually ended on New Year’s Eve 1970, when the Cute Beatle’s lawyers issued the writ that effectively ended the band. However, rather than diminish the world of pop music, Hepworth argues that a new era began as artists like Joni Mitchell and James Taylor came out from under the shadows cast by the Fab Four to take music in a different direction.

In Why You Love Music, Powell insists, “As we move from late adolescence into early adulthood, we accept a broader range of music into our lives, but unfortunately, most of us don’t continue to do so as we get older.” If he’s asking me to sincerely applaud my niece for playing Taylor Swift, that’s not going to happen. Hepworth would probably back me on this.

However, somewhere deep in the recesses of my shrinking 53-year-old heart, a faint voice sometimes hints that, well, maybe “Kiss on My List” is kind of a cheesy song. Thankfully, the moment of doubt quickly passes. As I’m sure you’ll agree, “Kiss on My List” remains a powerful ode to fidelity and passion, punctuated by beautifully woven vocal harmonies and a catchy melody that continues to offer itself as an anchor in these uncertain times.

No? Maybe you had to be there.

Michael Causey frequently writes about music for Washingtonian and Bethesda Magazine, among other publications.

“The Only Unavoidable Subject of Regret”: George Washington, Slavery, and the Enslaved Community at Mount Vernon

An historian plumbs the depths for a candid look at America’s first president and his participation in its worst institution.