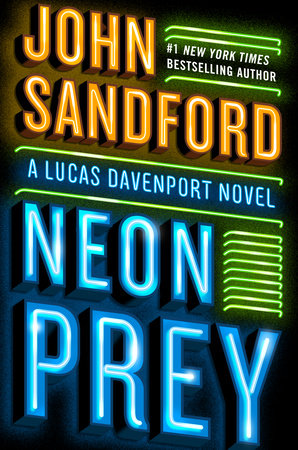 When I was a child, I always looked forward to visiting my grandfather in the tiny city of Lewisburg, Tennessee. The highlight of the trip was helping churn and create homemade peach ice cream, aka “nectar of the gods.”

Even before we arrived at his home, before he pulled out the fresh peaches and custard filling, and before I cranked for what seemed like an entire day, my taste buds knew: Without a doubt, it would be delicious.

After 29 Prey books and 11 Virgil Flowers books, I smile even before I turn to the first page of any John Sandford novel. Too many years ago, a fellow thriller aficionado handed me a rumpled paperback of Rules of Prey, Sandford’s first, and I was hooked. The hero of the series, Lucas Davenport, has been sliced, diced, and shot, yet still is quite capable of catching the bad guys.

Serial killers are not strangers to Davenport, and his prior successes give him considerable latitude when he is pursuing the worst of monsters. In Neon Prey, U.S. Marshal Davenport is assigned to track down what originally appears to be a low-level enforcer who has skipped bail.

The criminal moves to the top of the most-wanted scale when it’s determined that he left behind a garden full of dead bodies, most of which supported his own meat-eating. But catching a clever cannibal is never easy.

In order to assist him on his mission, Davenport brings in two of his colorful marshals, named Bob and Rae for the Baby Boomer generation. Add a brief appearance by Virgil “f---ing” Flowers, who escaped the Davenport-centric world to star in a series of his own, and, in the words of my father, “There was never a dull moment.”

What is Sandford’s secret to writing 40 novels using basically the same characters and maintaining the same level of page-turning excellence? First, the man is a master of brief but arresting character description, such as with this antagonist in Neon Prey:

“Deese was a thin man. He was fast, with ropy muscles, and mean, like an aggressive orangutan. His face was a skull: tight, sly, except where a half-dozen wrinkles crossed his sunburned forehead. He had black eyes and a nose that had been broken into angles like a lump of shattered pottery.”

Second, he is a master of pacing. When action isn’t filling the pages, plot twists and original dialogue consistently hold the reader’s attention. Few books have the distinction of being both a compelling read and one that the reader is reluctant to finish.

Humor isn’t a staple for thriller writers because it can distract from the plot, the action, or the character development. Often, attempts at levity are just annoying as they fail to elicit a smile. In fact, they’re worthy of an eye roll.

Sandford is one of the rare authors who uses humor brilliantly not through jokes, but through cutting dialogue. Because we’re dealing here with cops who know each other well, examples of said dialogue must be redacted from this review.

If you’ve never read a book by John Sandford, I would not suggest that you start with Neon Prey. Start at number one, Rules of Prey, and don’t skip any of the Prey novels. I promise you they are all delicious.