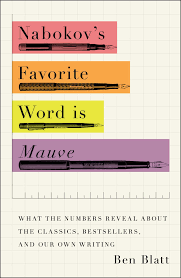 Some books raise a reader’s blood pressure through topic and presentation; others engage the imagination with suspense and intrigue; and still others open vistas for readers to visualize. Ben Blatt’s new work, Nabokov’s Favorite Word Is Mauve, carefully unwraps and analyzes such books, opening a door blocked by supposition and opinion in the literary past, a door previously only entered by statisticians.

In the non-literary world, Blatt’s witty approach to parsing the Western canon would make him the equivalent of a magician, except he’d be a magician who reveals the secrets behind his tricks. It is that revelation which makes this book so valuable for writers and students of literature.

Blatt wastes no time showing the secret hole in the table where the rabbit comes out in his hat: He starts with an explanation of the statistical proving of the authorship of The Federalist Papers, right in his introduction. By showing readers how statisticians Frederick Mosteller of Harvard and David Wallace of the University of Chicago applied statistical analysis to those historic documents in 1963, he lays the groundwork for this book.

From that point on, a reader will feel momentum propelling Blatt’s revelation of literary style and sense, something that could be said to have previously evaded the sharp knife of scientific approach. And his skill — at dissecting authors’ preferred words, grammatical peccadilloes, and stylistic idiosyncrasies — as analyst-surgeon is well established, as this book’s chapters show.

Beginning with an analysis of how Hemingway used adverbs, Blatt says:

“If Hemingway believes that the ‘laws of prose writing are as immutable as those of flight, of mathematics, of physics,’ then I’d like to think he’d find this mathematical analysis equal parts illuminating and outlandish. It’s outlandish at first glance because of the way we study writing. Many of us have spent days in middle school, high school, and college English classrooms dissecting a single striking excerpt from a Hemingway novel. If you want to study a great author’s writing, their most remembered passages are often the best place to start...But from a statistician’s point of view, it’s just as outlandish to focus on a small sample and never look at the whole picture.”

Blatt goes on to say that he used “a set of functions” to count the number of adverbs in all of Hemingway’s novels; over 865,000 words were evaluated in total. His disclaimer is that the process is “not 100% perfect,” but close. Close enough to quantify that Hemingway used an adverb for one of every 17 words, or at a rate of 5.8 percent.

Blatt proceeds down this path of analysis further, comparing Hemingway’s use of adverbs with Stephen King’s, at 5.5 percent, and then sets a range previously seen subjectively — e.g., King once commented that Stephenie Meyer’s use of adverbs is “not very good.” But once evaluated statistically, Meyer is found to have used adverbs at a rate of 5.7 percent — in other words, at less than Hemingway’s rate.

Blatt doesn’t stop with this simply understood, statistical look at comparative adverb usage. He delves into the perceived nature of adverbs, claiming that what King considers an adverb is not necessarily the standard paint pot of true adverbs. King’s adverbs are, as he states, “the ones that usually end in -ly.” Those are the words King refers to when he says, “The adverb is not your friend.”

So Blatt refocuses his analysis to strictly -ly adverbs, and, in the quantification of those, provides a chart showing Hemingway as the master of frugality at 80 adverbs per 10,000 words, trumping Twain at 81, Steinbeck at 93, Updike at 102, and King at 105. Topping that chart of -ly users is E.L. James (of Fifty Shades of Grey fame) at 155.

But Nabokov’s Favorite Word Is Mauve is not just a book that analyzes adverbs. In looking at the success and simplicity of the works of Dr. Seuss, for example, he scrutinizes the reading level of New York Times bestsellers over the past 60 years relative to the concept that “adult readers are looking for more than your average first grader.”

In discussing a formulaic measure of grade level, the Flesch-Kincaid Grade Level test, Blatt offers this description and these examples:

“The test works best when applied to large texts but it’s easy to understand with short samples. Take the first sentence of George Washington’s first state of the Union address: ‘I embrace with great satisfaction the opportunity which now presents itself of congratulating you on the present favorable prospects of our public affairs.’”

At 43 syllables and 23 words, the sentence would be given a grade-level score of 15.

Now compare it to the first sentence of George W. Bush’s last State of the Union Address: “Seven years have passed since I first stood before you at this rostrum.”

Can you see how Nabokov’s Favorite Word Is Mauve has the potential to hijack a reader? It lightly steps along in its trajectory and, as a reader engages each chapter, the book exerts an addictive force, like a perfect pastry or a smooth yet full wine sipped beside a roaring fire on a frozen night, a fleece wrapped around one’s shoulders for good measure.

Is Ben Blatt a magician, after all, and is Nabokov’s Favorite Word Is Mauve something like the combination of stage, velvet curtains, silk-covered table, and top hat all fused into one tangible effect? Perhaps. But one thing is certain: Blatt has done his homework, and his book is a fully engaging and at times amazing revelation aimed squarely at literature’s phantasm and hitting its mark with panache.

Bruce Arlen Wasserman assembled his first poetry manuscript at the age of 17 and farmed and worked as a blacksmith in his twenties. He received an MFA from Vermont College of Fine Arts and was nominated for a Pushcart Prize in 2016. He works as a reviewer for the New York Journal of Books, and his publications include three poetry chapbooks and a full-length collection of poetry.​