A wry, captivating reimagining of history both recent and receding. 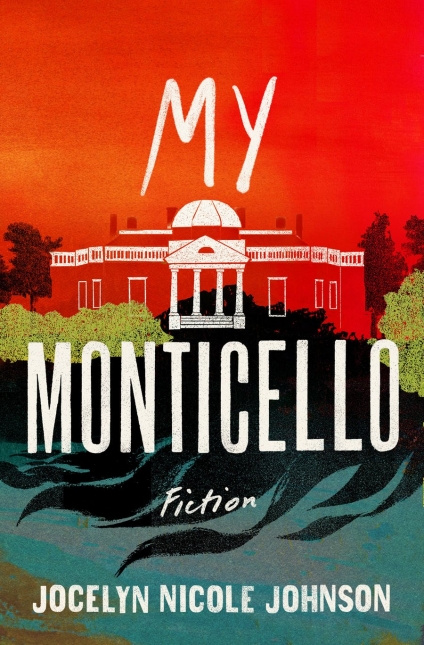 To paraphrase Rick James: Nostalgia is a hell of a drug. Taken in large quantities, it can cause delusions of grandeur, hypnotic and violent episodes, and the loss of clear sight. An overdose can elect presidents and fuel hysteria. While there is no one course of treatment for nostalgia, it must be carefully monitored and managed for fear of spreading.

But there is hope. Jocelyn Nicole Johnson provides a mesmerizing antidote in her new story collection, My Monticello, the titular novella in which provides the centerpiece for an examination of history’s impact on our present-day landscape and future possibilities.

There is no direct comparison to Johnson’s debut work; imagine some strong brew of Edward P. Jones and Colson Whitehead, with perhaps a dash of Kathleen Collins thrown in. Jones wrote about the everyday lives of Black residents of Washington, DC, a place he referred to as the “capital of the unfree world.” Johnson’s home is Virginia, a place which, at least at moments during the Civil War, housed the literal capital of the unfree world. It’s in this commonwealth that she sets the events in her collection.

(Perhaps “sets” isn’t the right word. Virginia is the reality of each of these stories, grounding them no matter where they go.)

My Monticello begins in a fictional Charlottesville that, as Johnson subtly reveals, is about 20 years past 2017’s infamous “Unite the Right” white-supremacist rally. It was at those protests that a young woman, Heather Heyer, was run down by a man in a car and killed. In Johnson’s story, Naisha Love, a young Black woman who grew up in Charlottesville and is a student at the University of Virginia, is leading a group away from the city. The group includes her grandmother, MaViolet, her boyfriend, Knox, and a “scattering of neighbors.” They are fleeing a “dark new unraveling” that has led to white mobs of mostly male UVA students attacking Black neighborhoods in the city.

Most of the rest of the story takes place at Monticello, the home/plantation/museum of Thomas Jefferson, the Founding Father/enslaver/gentleman farmer. I hesitate to reveal much more because, while there are twists in the plot, the best surprises come from how Johnson manipulates the symbols and signifiers of Jefferson’s estate. (Or more to the point, perhaps not his estate.) Naisha reflects:

“Everything at the top of that hill felt new to me, transfigured from the times, I’d come before, for school trips, for work...Now my real life flailed and smoked behind me. Now this was my life. Walking up, I felt myself seesawing again between density and lightness.”

As this group of largely Black and brown people turns Monticello — a place with the bones of the enslaved in its parking lot — into a refuge, Naisha becomes the uneasy matriarch of something like a family, even as she struggles with her own personal connection to Jefferson’s home and the refugees now arriving there.

The author has a way with moments — the literary equivalent of narrowing her lids and giving a side-eye. What more description do you need of Knox, Naisha’s white and earnest college boyfriend, than that his messenger bag “held a toothbrush, a gridded notebook, [and] a copy of Morrison’s Song of Solomon that I’d lent him some time before.” I can see the Birkenstocks on his feet already.

Johnson was a teacher in the Charlottesville public schools for many years, and her talent at portraying characters and situations that are sympathetic, frustrating, hopeful, thoughtful, angry, deluded, and inspired all at once must, in part, have been developed from many years of observation in a classroom.

Schools spark something in Johnson’s characters. “How much pressure did it take, we wondered, to break a thing,” a 10-year-old muses as he stuffs a pencil into an electric sharpener in the story “Something Sweet on Our Tongues.” In tales like this one and others, Johnson portrays an educational system seemingly hellbent on answering that question.

Books dealing with the issues addressed in My Monticello are often placed in cliché containers; they are part of “conversations about race” or they “grapple with history.” But the stories here have little interest in such things, thank goodness. They demand to be read on their own terms. From the collection’s opening line, “[w]e claimed it first, this little mountain,” Johnson makes it clear that this narrative is its own declaration.

Nostalgia has many side effects, but one of its most potent distortions is offering a false sense of clarity to our present condition. This is how things were, and this is how they should be. That assumption has real, distortive effects. The journalist Tracy Thompson wrote that, in the South, “the line between ‘history’ and ‘current events’ is notoriously hard to draw.” My Monticello is a thrilling demonstration of how surreal and intimate that faint boundary truly is.

Carr Harkrader is a writer and book critic in Chicago. You can follow him on Twitter at @CarrHarkrader.