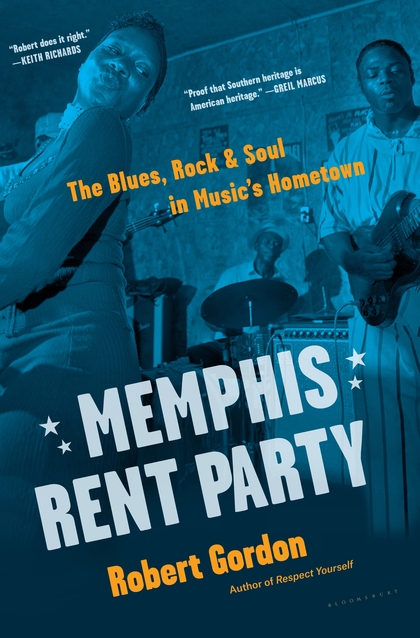 Memphis Rent Party is a personal, affecting collection of short pieces by veteran music journalist and Oscar-nominated filmmaker Robert Gordon about the many musicians — famous, infamous, and obscure — on the Memphis scene he’s encountered over the course of his career. Each piece is introduced by a running narrative that provides the context for it and the influence its subject has had on Gordon specifically and music in general.

As explained by the author in the preface, his introduction to the music of his adopted hometown came about in his early teens via a 1975 Rolling Stones concert. The show was running ahead of time, and Mick didn’t want to go on stage before sundown. In a flash of inspiration, he requested that the promoter seek out Memphis bluesman Furry Lewis and have him perform a set.

The young Gordon was blown away by Lewis’ impromptu performance. Shortly thereafter, he sought out Lewis and began to visit him at his home, bringing a pint of High Time bourbon as the price of admission. Gordon’s lifelong love affair with the blues, and just about every other genre of music that could be heard in the Memphis air, was cemented a few weeks later at a local blues festival when he heard the band Mud Boy and the Neutrons play.

Mud Boy featured a bunch of bohemian white boys playing alongside authentic black bluesmen. They were a revelation to Gordon, especially their eccentric leader, the legendary producer/musician Jim Dickinson, who looms large in this story, a thread winding through many of the pieces, tying them all together.

Many of the musicians discussed here were well-known to Gordon, and some were actually friends: Dickinson, Box Tops and Big Star front-man Alex Chilton, Townes Van Zandt, Jeff Buckley, Tav Falco, and Cat Power. Others, like Jerry Lee Lewis and Bobby “Blue” Bland, were interview assignments from various magazines.

The attentive reader will notice that not all of the artists mentioned are natives of Memphis. Gordon — following an observation that Dickinson once made that Memphis’ musical heritage is built upon those outsiders who were drawn to the city — has expanded his scope to include the many artists that came to the city seeking some of the magic offered by its legendary independent recording studios: Memphis Recording Service, home of Sun Records, where Elvis, Johnny Cash, Carl Perkins, Roy Orbison, and so many others got their start; Chip Moman’s American Sound, where Elvis recorded his most successful songs following his 1968 comeback; Stax, the extraordinary launching pad for so many soul artists, most notably Otis Redding; and Ardent Studios, where Jim Dickinson did much of his production work.

For once, a book’s subtitle is no exaggeration.

One could argue that Gordon has omitted some of Memphis’ biggest stars. Although Elvis is invoked many times, he does not receive his own piece. Nor do Al Green, Isaac Hayes, Dan Penn, Spooner Oldham, Booker T. Jones, Chips Moman, or many others. But it would be an unfair argument. Gordon has chosen those artists who made a personal and lasting impact on him — those that gave him something different.

A common theme shared by the most haunting of these profiles is the tragic arc of the subjects’ lives. Despite tremendous talent, many never achieved lasting fame and/or fortune, like rockabilly pioneer Charlie Feathers, an influential contemporary of Elvis. Or, if they did, it was fleeting and even unwanted, like Alex Chilton or Jeff Buckley.

Buckley, son of folksinger Tim Buckley, moved to Memphis following the success of his first (and only) album, to get away from the pressures — “the heat of the factory,” as Gordon puts it — that accompanied that success. Gordon met him at a local recording studio and recommended a house for rent in his neighborhood.

Thirty-six hours before Buckley drowned in the Big Muddy, Gordon spotted him standing on a street corner in a downpour after having been stopped by a sheriff’s deputy. Gordon picked up Buckley, who was in a foul and argumentative mood. After exchanging heated words, Buckley jumped out of the car, saying it was a nice night and he’d walk. Gordon never saw him again.

Townes Van Zandt, one of the finest songwriters of the past 50 years — some claim he has no need to stand in Dylan’s shadow — crossed paths with Gordon in 1993, when Gordon served as road manager on a European package tour that featured Van Zandt.

Days before Van Zandt died, he was recording in Memphis, where he consumed vodka shots at regular intervals to enable him to perform. Van Zandt’s self-destructive streak is the stuff of legend and is, unfortunately, central to his myth. At his funeral, his friend and fellow songwriter Guy Clark opened his eulogy with, “I guess I booked this gig thirty-some years ago.”

Regardless of the level of fame, each musician gets his loving due from Gordon. He has the rare ability to convey the power, emotion, and depth of feeling that music can produce. In piece after piece in Memphis Rent Party, the author does what only the best music journalists can do: motivate readers to run out and find the wonderful music they’ve just read about. I’ve already picked up some from several of the artists profiled in this captivating book. You should, too.

Life in the trenches of World War I, recorded by one who endured four years there.