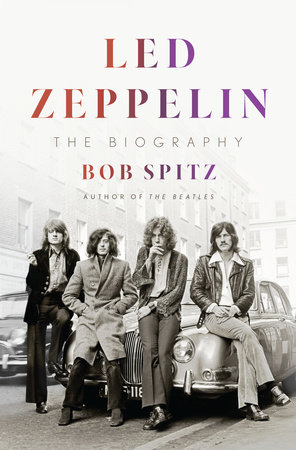 History has anointed Led Zeppelin as the greatest hard-rock band of the 1970s. The quartet emerged from a crowded field with the era’s biggest sales, several of its finest LPs, and arguably its signature song, “Stairway to Heaven.”

At its best, early on, Led Zeppelin gave mesmerizing concerts. But the band’s records are its legacy. It’s not for everyone: To modern ears, singer Robert Plant’s lyrics sound frequently vulgar and occasionally misogynistic. He and chord-smith Jimmy Page nicked entire songs from great Black blues artists. Fifty years on, the entire Zeppelin oeuvre resonates with the distant echo of smoky adolescent bedrooms.

Within this exhaustively researched account, Spitz unearths a trove of caustic reviews and bitter reflections to remind us how very often the world’s greatest live-rock band played dreadful gigs, and how thoroughly Led Zeppelin was reviled — by critics, adult music fans, and even fellow pop stars — for the better part of its life.

When George Harrison first heard a test pressing of Led Zeppelin I, released in 1969, “It wasn’t just that he didn’t get it,” a friend recalled. “He thought it was awful.” Rolling Stone, the bible of American rock ‘n’ roll, declared the album an “avalanche of drums and shouting.” The Los Angeles Times greeted an early show as “an exhibition of incredible self-indulgence.” The band grew to loathe the press.

Here, I think, lay the problem: From the beginning, Led Zeppelin appealed primarily to teenage boys. Juvenile delinquents, essentially, drove its album and concert sales. And nothing repulsed slightly older fans and critics like a band that courted adolescents. Rolling Stone heaped similar scorn on contemporary acts as far-flung as Jethro Tull and Black Sabbath for their pimply minions. Yet, writes Spitz:

“The music took audiences to a place they’d never been before, a place similar to the hysteria-induced level where, years earlier, the Beatles had transported hordes of thirteen-year-old girls. Led Zeppelin’s audiences were different, older…somewhat. Mostly boys between the ages of fifteen and twenty thronged the area in front of the stage, where Jimmy and Robert, aided by an army of Marshall stacks, whipped them into delirium.”

Led Zeppelin aged along with its fans, and the ice gradually thawed. But then punk hit, and critics pivoted from dismissing the Zep as sophomoric to interring the band as prog-metal dinosaurs. Led Zeppelin couldn’t catch a break — except with record buyers and concert patrons, who made its members some of the wealthiest pop stars on the planet.

The band disintegrated in 1980 following the untimely death of John Bonham, one of the great rock drummers, whose drinking had eclipsed his playing. In the years that followed, Led Zeppelin’s reputation gradually rose. I recall them, in my own 1980s adolescence, as one of the two great stoner-rock bands of the 1970s, alongside Pink Floyd. Arthouses staged double features of “The Song Remains the Same,” the band’s cheesy cult-classic concert film, and Floyd’s dystopian acid trip, “The Wall.”

Nowadays, Led Zeppelin seems to stand alone, its recordings ensconced as the crown jewels of hard rock. The first two masterful LPs, thoughtfully titled I and II, show Led Zeppelin bursting forth and rocking harder than anyone else, and blessed with a leader, Page, who could write great songs adorned with brilliant guitar figures. The third album revealed the full breadth of Page’s ambition: He sought to bridge heavy metal, progressive rock, and folk.

Those impulses reached full flower on the untitled fourth album, which, across its first side, wrestles with King Crimson-sized time signatures on “Black Dog,” rocks harder than ever on the aptly named “Rock and Roll,” and unfurls a full-sail folk epic on “The Battle of Evermore” before concluding with that multi-sectioned masterpiece, “Stairway to Heaven.” Spitz told me IV might be his favorite Zeppelin album, and I won’t argue.

The author smartly builds his narrative around Page, a wunderkind London session guitarist who reinvented himself as a blues-rock star in the legendary Yardbirds. As that band lost steam, Page seized control, cleaned house, and reinvented the ensemble as an instrumental power trio, with fellow session whiz John Paul Jones on bass and keys and a pair of Midlands unknowns on drums and vocals. Bonham drummed with unmatched fury and intuitive rhythm. Plant sang with a potent, growling tenor that soared above the din.

Across six splendid albums, Page revealed himself as a front-rank songwriter and a canny producer, particularly in the way he captured Bonham’s hammer-of-the-gods percussion with microphones strategically placed in drafty British manors. Yet Page could not improvise like Eric Clapton or Jeff Beck, his fellow Yardbird alumni; to my ears, many of his solos never really get off the ground. But his distinctive sound, bracing as a cold wind from Valhalla, captivated the rolling-papers crowd. And his scripted notes — the dizzying call-and-response with Plant on “Black Dog,” the chromatic progression on “Kashmir,” the octaval assault of “Immigrant Song” — endure as epic, timeless riffs.

Led Zeppelin is an excellent book. Spitz tells his story masterfully. He seems not to have scored fresh interviews with surviving band members, but he tapped dozens of friends, roadies, fellow musicians, and groupies and amassed a busload of archival clips.

Still, many of his revelations sadden the soul.

Offstage, Spitz unspools story after blood-curdling story of unimaginable, inexcusable excess. At the height of their fame, these spoiled men-children dismantled hotel rooms and hurled furniture from windows from sheer boredom. Their handlers meted out brutal beatings to anyone who looked at them funny. The band and their entourage exploited an endless procession of underage girls, passing them around like party favors, tying them to drainpipes, humiliating them with human filth. No one seemed to care. Writes Spitz:

“I set out to tell the full story of the band. Their behavior on the road was no secret. I was determined to portray it straightforwardly, without pulling any punches. For me, it was important to let the actions of the musicians and their rationalization speak for themselves. I also let the women who were caught up in the scene speak for themselves. Look, it was often an ugly scene. That’s part of the Led Zeppelin story.”

Led Zeppelin is a compelling work, but one that may dim the Led Zeppelin legend. Gauzy Rolling Stone retrospectives and nostalgia-hued books and films would have us remember the arena-rock era as a pot-scented Eden, an unending singalong on a boozy tour bus. Bob Spitz gives us the facts, and they tell a darker story.