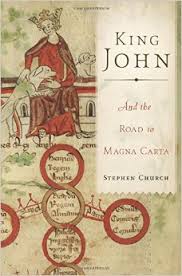 King John of England (r. 1199-1216), the only one of his name, has suffered from a bad reputation for 800 years. Whether as the puerile adolescent of "The Lion in Winter," the usurping prince of Robin Hood, or the villain of Shakespeare’s play, he has been consistently portrayed as an almost total failure.

Stephen Church, professor of medieval history at the University of East Anglia and author and editor of two prior books on King John, has now written a biography that dispassionately reconsiders the king’s reign and proves that his reputation is richly deserved.

John began life with notable advantages as the son of two of the most charismatic personages of the Middle Ages, Henry Plantagenet and Eleanor of Aquitaine, and the brother of a lionhearted crusader. He was on his accession the wealthiest man in England and inheritor of rich lands on the Continent in Normandy, Anjou, and Aquitaine. But he rebelled against his father, betrayed his brother, murdered his nephew, made an enemy of the pope, and alienated virtually every powerful constituency of his realm.

He failed at every major task confronting him: maintaining the Plantagenet lands in France, keeping peace at home, gaining the support of the English barony, sustaining good relations with the church, and upholding his royal prerogatives. By the end of his reign, he had fought almost incessantly with the Scots, the Irish, and the Welsh, lost virtually all his lands on the Continent, signed a great charter relinquishing his powers, and been excommunicated.

If he had lived only a little longer, he would likely have lost his crown, as well.

John never learned the essential skills of kingship. He failed to inspire the loyalty of the great men of the English aristocracy and never figured out how to raise money for his endless military campaigns without alienating his subjects. He had no skill in conciliation and lacked the charisma of his brother to lead by example.

He so mismanaged relations with the church that, for a time, all of England was placed under an interdict, and he recovered only by pledging England as a fief to the pope. He engendered such disloyalty that many of his subjects supported the claim of the French dauphin to overthrow the whole Plantagenet dynasty.

Church describes well the various ways the English monarch and his family claimed land and the campaigns by which John lost, won back, and ultimately lost the lands again. Along the way, he provides intriguing glimpses of John’s powerful allies and antagonists, including Philip Augustus of France, Pope Innocent III, and the redoubtable Eleanor, all of whom outstripped the lackluster John in talent and interest.

But the author never succeeds in providing a nuanced portrait of John himself, or explaining what it was that led him to act as he did. Winston Churchill, in far fewer words in The Birth of Britain, painted a more complex portrait of John’s contradictory qualities, describing a king who “united the ruthlessness of a hardened warrior with the craft and subtlety of a Machiavellian”; one who was at the same time “judicious, always extremely capable, and on occasions even generous,” but prone to “violence, greed, malice, treachery and lust.”

While Church has written what may become a standard narrative biography, by setting for himself the task “to reveal the complexity of the man who became the notorious figure of popular legend,” he has overreached his interpretive skill.

More disappointing, Church fails in his treatment of an essential aspect — more, the most critical historical event — of John’s reign, the creation and signing of the Magna Carta. Indeed, the book’s subtitle, The Road to Magna Carta, is misleading. The entrance ramp to that road, seemingly almost a detour, isn’t reached until the next to last of 12 chapters. When the reader finally arrives at his destination, he is disappointed to find little discussion of that greatest of English legal documents.

To be sure, Church describes well the precursors of Magna Carta in the charter of Henry I and the Articles of the Barons of early 1215, and he instructively explains it not as a royal grant of rights but a peace treaty between the king and his barons. But by largely omitting discussion of its content, he fumbles what should have been the high point of his book.

In his defense, this may be because, on a longer view, Magna Carta is important not so much for the specific rights it granted as for its principle that the monarch is subject to rules. And Church correctly concludes that Magna Carta “signaled the beginnings of English constitutional monarchy.” It is too bad for King John that he granted it only under coercion and never understood it as the ringing statement of rights whose reputation has far exceeded his own.

Ronald W. Meister, who thinks Claude Rains was a better Prince John than Richard Lewis, is a partner at Cowan, Liebowitz and Latman, P.C., in New York City.