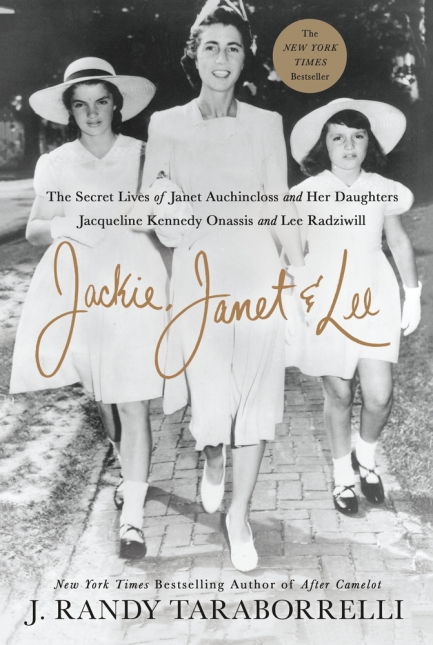 Nothing sells like sex, diets, and the Kennedys. A book entitled How JFK Made Love to Marilyn Monroe on 150 Calories a Day would zoom to instant success. Just ask J. Randy Taraborrelli, who’s been mining two of those veins for the last 20 years and claims “many New York Times best sellers” to his credit.

In 2000, he wrote Jackie, Ethel, Joan: The Women of Camelot, which became a two-part TV series on NBC in 2001. He wrote After Camelot in 2012, and he now offers Jackie, Janet & Lee: The Secret Lives of Janet Auchincloss and Her Daughters Jacqueline Kennedy Onassis and Lee Radziwill.

Spoiler alert: He adores Jackie and abhors Lee. The big reveal, according to his publisher’s press release, is that (supposedly) their mother performed do-it-yourself artificial insemination to get pregnant twice after she divorced their father and married her second husband, Hugh D. Auchincloss.

Janet was 37; Hugh was 58, and he had had three children by two previous wives. Yet we’re told to believe that Mr. Auchincloss was incapable of impregnating Mrs. Auchincloss in 1945 and again in 1947. And — hang on — we’re told why: “Even though Hugh was not able to sustain an erection, he was able to produce sperm…[and Janet] used a kitchen utensil along the lines of a turkey baster — though it would be incorrect to say that this was the specific instrument she used; no one can quite remember...”

With eyes popping, I turned to the chapter notes for documentation on this “never before revealed secret.” Under source notes for “Janet’s Unconventional Pregnancy,” Taraborrelli writes: “Because of the sensitive nature of this chapter, my interviewed sources asked to remain anonymous.”

With Mr. and Mrs. Auchincloss deceased for many years, I wondered what possible “sources” could’ve been interviewed about the intimacies of their bedroom. No documentation is provided, other than the author’s note that he recycles sources from his previous books. Then, like a bird feathering its nest, he snatches twigs and wisps from newspapers, magazines, and tabloids while plucking from the vast trove of other published lore, which Jill Abramson, in the New York Times, once estimated to be 40,000 Kennedy books.

In this book, some readers might be troubled by the lack of attribution for “she felt,” “he thought,” “said an intimate,” “revealed an associate,” “confided an employee,” and “reported someone with knowledge of the situation.”

Others might be puzzled by the personal quotes Taraborrelli does attribute, particularly a story about Janet giving Lee a check for $650,000, saying: “For any time I ever let you down, I’m very sorry. Maybe this small gift will make your life a little easier. I love you, Lee.”

Taraborrelli follows with: “We don’t know Lee’s reaction; she’s never discussed it and only she and Janet were in the room at the time the gift was presented.” So how is it that Taraborrelli, who was not in the room, can gives us Janet’s exact words?

Perhaps the quotes come secondhand from Taraborrelli’s main source for this book: James “Jamie” Auchincloss, the 71-year-old son of the aforementioned parents and the half-brother of Jacqueline Kennedy Onassis and Lee Radziwill, although Taraborrelli tells us: “[H]e never refers to Jackie and Lee as ‘halfs.’”

Full disclosure: I interviewed Jamie Auchincloss several times in 1975 when I was writing a biography of Jacqueline Kennedy Onassis. That book, Jackie Oh!, received attention because my interview with former Florida senator George Smathers was the first time a Kennedy intimate had gone on the record to discuss the president’s extra-marital affairs.

During our three-hour interview in his law office, Smathers also confirmed that Jacqueline Kennedy had received electroshock therapy for depression after losing her first child, Arabella, in 1956. Published 20 years later, my book also revealed for the first time the prefrontal lobotomy performed on the Kennedys’ eldest daughter, Rosemary, who was severely diminished by the surgery, and, as a result, spent the rest of her life in the care of the nuns at St. Coletta’s in Wisconsin.

While Jamie Auchincloss was not the source for those revelations, he did speak openly about his famous relatives and, unfortunately, he paid a price. Appearing on Charlie Rose’s local DC talk show a few years later, he said that Jackie stopped speaking to him after my book was published, much as she had with others whom she felt had shared too much personal information about the late president, including Ben Bradlee, who wrote Conversations with Kennedy, and Paul “Red” Fay, JFK’s Navy buddy, author of The Pleasure of His Company. When Fay sent his royalty check to the Kennedy Library, Jackie sent it back.

A few years ago, Jamie Auchincloss plunged from the height of being the 6-year-old page boy who carried the wedding train of his sister’s gown when she married John F. Kennedy to the scandal of being jailed at age 67 for the possession of child pornography. In 2009, he pleaded guilty to distributing what prosecutors called lewd and lascivious images, and was charged with two felony counts for encouraging child sexual abuse.

He spent Christmas 2010 in jail. Failing to cooperate with his court-ordered sex offender treatment program, he was sentenced to eight months in jail, serving just over half the time behind bars and the rest in home detention. He was put on probation for three years and ordered to stay away from children for the rest of his life and to register as a sex offender.

Taraborrelli writes that “this unfortunate turn in Jamie’s life in no way impacts his standing in history or his memories of growing up with his parents…and siblings…Or his brothers-in-law, Jack, Bobby, and Ted Kennedy. The times I spent with Jamie were memorable; I appreciate him so much. He also provided many photographs for this book.”

If you’re a reader who requires corroborated information and credible sourcing in your nonfiction, this book may give you pause. Then again, if your requirements are less stringent, you might enjoy the photographs.

In addition to Jackie Oh!, Kitty Kelley wrote Capturing Camelot: Stanley Tretick’s Iconic Images of the Kennedys. In two cover pieces for People Magazine (1988), Kelley broke the story of Judith Exner’s confession that, in addition to being JFK’s lover, she was also his conduit to the Mafia, carrying his messages to Chicago mob boss Sam Giancana.