Indelible Ink: The Trials of John Peter Zenger and the Birth of America’s Free Press

A masterful courtroom drama about the foundational case for unfettered journalism in the U.S. 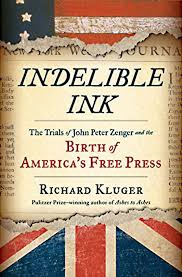 William Cosby arrived in New York Harbor as the colony’s newly appointed royal governor in 1732, and quickly jumped into a swirling sea of economic conflicts and political intrigue. Unwittingly, Cosby helped lay the cornerstone of America’s freedom of the press by taking on the German immigrant printer of a weekly newspaper that regularly tarred him as corrupt, incompetent, and oppressive.

Cosby initiated what proved to be the unsuccessful criminal prosecution of John Peter Zenger for publishing mockingly critical articles about the governor in the New-York Journal Weekly. The jury of loyal British subjects acquitted Zenger despite the judge’s instruction to find him guilty.

Zenger came to trial only after two previous grand juries had refused to indict him. The trial itself was short: It lasted less than a day, with no witnesses and only the arguments of opposing counsel. And the impact of Zenger’s acquittal, apart from its immediate effect for him and the principals in the political fight, was more symbolic than substantive.

The jury verdict did not undo the English law precedents for prosecuting criticism of the government as “seditious libel.” Nor did it prevent the post-revolutionary Congress six decades later from enacting the Sedition Act of 1798, a law that the Federalist president John Adams used to put a handful of newspaper editors and other critics in jail. Fortunately for U.S. history, the Anti-Federalists allowed that law to lapse in 1801, after Thomas Jefferson became president.

In leading up to the brief courtroom drama in Indelible Ink, the Pulitzer Prize-winning author Richard Kluger masterfully tells a story that is rich in both human drama and historical background. Kluger won the Pulitzer Prize for his 1996 book Ashes to Ashes, a history of the century-long public health fight over tobacco. Among his four other works of nonfiction, he is perhaps best known for Simple Justice, the magisterial history of the multiple lawsuits that led to the Supreme Court’s decision to outlaw racial segregation in public schools.

As he did with Simple Justice, Kluger here focuses as much on the characters in his opening as on the legal issues. Zenger came to the American colonies in 1710 after his family fled war-torn Central Europe early in the 18th century. A younger brother died in the crossing.

Zenger learned the printing trade under an eight-year apprenticeship to William Bradford, New York’s first printer, who had the lucrative contracts to print official announcements by the colonial government in the New-York Gazette.

Zenger moved to Maryland to find printing work but returned to New York to compete with his previous employer and eventually to take on the colonial government by agreeing to print a rival newspaper.

To tell the story, Kluger has done all he can with the historical sources available — for example, reading all of the issues of the Journal Weekly from its 18-year history. Zenger took on the work at the behest of a prominent lawyer, James Alexander, one of the leaders of a popular party opposed to the royal governors. Kluger assumes without proof that Alexander must have warned Zenger of the potential legal perils of publishing what Cosby would later term “divers scandalous, virulent, false and seditious reflections.”

The multiple accusations against Cosby included his removal of a leader of the opposition faction from his post as chief justice, diversion of taxes for personal benefit, appropriation of Indian lands, and attempted rigging of elections for the colonial legislature. Kluger tells those stories in detail but without taking a position on whether Cosby was as bad as his critics charged.

Zenger was jailed for eight months as he awaited trial. The court dismissed Zenger’s chosen lawyer, but the prominent Philadelphia lawyer Andrew Hamilton volunteered to take the case. Hamilton directly challenged the established precedent that truth was no defense to a charge of seditious libel.

Reconstructing Hamilton’s oration from the lawyer’s own account, Kluger quotes him as telling jurors that “all freemen” had a natural right and privilege “publicly to remonstrate the abuses of power in the strongest terms.”

The jury needed only 10 minutes to find Zenger not guilty. The verdict brought forth three “huzzahs” in the crowded courtroom. Zenger was discharged the next day. The Journal Gazette published no news of the verdict. The Weekly Journal carried only a modest note that Zenger would be returning to work. It followed a week later with what Kluger calls “a brief account” of the trial.

The doctrine of seditious libel survived as a lurking threat to freedom of the press until the Supreme Court effectively laid it to rest in 1964 with the landmark decision in New York Times v. Sullivan limiting libel suits by public officials. Kluger concludes by highlighting a new threat to press freedom: the prosecution or attempted prosecution of whistleblowers from within the newly emerging national security state, such as the now-imprisoned Chelsea Manning or the in-exile Edward Snowden.

How can the press fulfill its role, Kluger asks, if the government intimidates those who would raise alarms about the threats to civil liberties in the post-9/11 era? The question is rhetorical, and Kluger leaves it unanswered.