In the Land of Men: A Memoir

An editor reflects on her time spent at Esquire — and in thrall to David Foster Wallace. 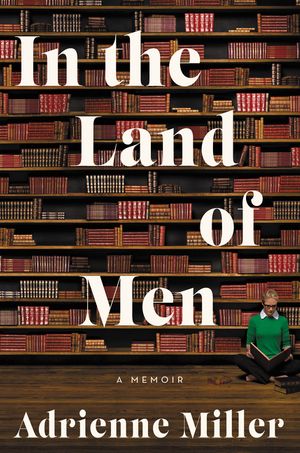 Adrienne Miller does not mince words when she dictates the duty of book reviewers: “The reviewer’s job is to evaluate the book on its own terms and to determine how well the book succeeds — or doesn’t — within those terms.”

So informed, I cautiously offer what will become obvious while reading In the Land of Men — Miller, 47, writes with daunting authority and suffers no lack of self-confidence.

Growing up in Marysville, Ohio, as the only child of “permissive” parents, she writes that as a youngster she was extolled for “my quiet intelligence.” Academically gifted, she recalls her “Jamesian moment” (I presume that’s Henry, not Jesse) as seeing “Amadeus” eight times when she was 13. That Milos Forman film, plus an “enduring obsession” with Thomas Jefferson, formed the landscape of her adolescence: “I was an odd child.”

Her family moved to Akron when she was 9. There:

“The sunsets, at first, before I finally started paying attention, didn’t seem as striated or as luminous as they had back in the flatness of Marysville, and new categories of precipitation fell from the sullen, but possibly more interesting, northeast Ohio sky.”

Following college “at a Midwestern no-name university” and a couple of go-fer years at GQ, her “quiet intelligence” made noise. She put herself forward to become the literary editor of Esquire at the age of 25, and, she writes, she was fully entitled to the position. “It’s not as if one can earn a Ph.D. in ‘literary editor.’ Instinct, taste and judgment can’t be taught. And I knew I had instinct, taste and judgment. I was my own first choice, and that’s all that mattered.”

She held the job for eight years, beguiled by Esquire as “the chief platform for American short fiction from the forties through the seventies: Norman Mailer, Raymond Carver, Saul Bellow, William Faulkner, Tim O’Brien, F. Scott Fitzgerald, Dylan Thomas and Ernest Hemingway.” Not a woman in the bunch; hence, the title In the Land of Men.

Her publisher is positioning her memoir as a feminist wail from the male trenches. But, while Miller blasts some unnamed men for sexual assaults, her book is actually a knee-bending homage to one particular man who dominates every page: David Foster Wallace, the 46-year-old writer destroyed by his demons; he committed suicide in 2008.

“[H]is artistic triumph in the face of such tremendous psychological and emotional odds was a miracle for which we all must be forever grateful,” she writes. She reveres Wallace for writing Infinite Jest, which Time listed as one of the 100 best English-language novels published between 1923 and 2005.

Miller sanctifies his thousand-plus-page book as “the novel that had changed the world,” and “changed our language.” She ranks it alongside the universe-bending genius of the pyramids, Beethoven’s Ninth, and Chartres Cathedral.

Besotted by Wallace, Miller edited four of his short stories for Esquire. “He was the fiction writer with whom I’d work the most frequently at the magazine.” She moved quickly from being his editor to his lover, noting “the relationship fast-trackiness” of their affair:

“There was a sense that David, more than any other living writer, was read compulsively, his sui-generis-ness unbearable to all…[It] is true that I regarded David not merely as a great writer but as one of the greatest and most uncompromising artists of all time.”

She rhapsodizes about “so radically name-y a name: David Foster Wallace.” She recalls every item he carried in his canvas bag, and all they discussed over their first lunch. She relates detail after detail of their decades-old telephone conversations — whether preserved in a diary, tape recordings, or fevered memory, she doesn’t say.

“I looked at David. David looked at me. His eyes were a rich chestnut flecked with gold.” Oh, dear. A bit too Barbara Cartland-y here, but it’s a rare lapse in an otherwise literary-soaked tribute to one man’s memory.

“David was Augustinian,” Miller writes, which may send you to Google to try to figure out the connection between the 5th-century bishop of Hippo, whose prolific writings influenced all of Western Christianity, and Wallace, who wrote two novels, three collections of short stories, two books of essays, and several magazine articles.

In the Land of Men proves that Miller has read widely and deeply. She cites Tate, celebrates Nabokov, quotes Pindar, genuflects to Mozart, and even begins a dialectic on the virtuosic talent of John Barth.

She commands an astonishing vocabulary, too: “the rhizomatic conversations”; “an anvilesque collection”; “a self-serving sockdolager of rage.” Throughout the book, she employs an eccentric style that would give Strunk and White the bends, adding “y” to words for no fathomable purpose: “workshop-y,” “science-y,” “kind of date-y,” “magazines were so interminably magazine-y,” “a self-help-y version,” “ugly and rape-y.”

For the most part, though, she makes magic on the page. She describes the 24/7 “Jackie deathwatch” outside Kennedy Onassis’ Fifth Avenue apartment as “a stream of people united in one brow of woe.” Some of Miller’s literary references sent me scrambling to the Internet, such as when she was once made to wait at a stage door for Wallace and “felt preposterously like the Person of Consequence in Gogol’s ‘The Overcoat’: Do you know to whom you are speaking?”

Minutes later, she sees “some Fanilow-type people were waiting for him on the sidewalk.” (If you’re a child of the seventies, you’ll know she’s referring to the fans of Barry Manilow. If not, you’ll run to the Urban Dictionary.)

She dismisses a high-school classmate as “Charles Bukowski, but on paint thinner.” (Of course, you know that Bukowski, who died in 1994, was a German-born poet who celebrated prostitutes and drug addicts.)

If you’re a devotee of David Foster Wallace, you’ll devour this memoir with pleasure. If not, you may enjoy the cultural scavenger hunt and appreciate how much Adrienne Miller makes you stretch. After all, as Robert Browning wrote, “A man’s reach should exceed his grasp, or what’s a heaven for?”

Faster: How a Jewish Driver, an American Heiress, and a Legendary Car Beat Hitler’s Best

This accounting of an iconic 1938 race recaps every twist and turn, for better or worse.

Bourbon: A History of the American Spirit

The ups and downs of bourbon in the U.S., from its origins, through Prohibition, to today’s craft distillers.