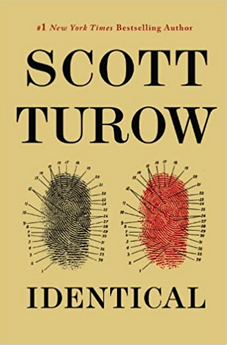 Not long into Identical, Scott Turow’s new thriller, I started thinking: has the master of the legal suspense novel lost his mojo? It was slow going. So many characters were introduced so quickly that I found myself making a dramatis personae list. Oh me of little faith. Turow was simply doing his usual craftsman-like job of establishing a rock solid foundation for his story.

The story is divided into five sections, each beginning with a different character’s involvement in events on September 5, 1982, the day of the murder of Dita Kronon. The rest of the story takes place in 2008, beginning with the parole hearing for Cass Gianis, who 25 years earlier had confessed to Dita’s murder. With a nodding glance to Romeo and Juliet (the Hatfields and the McCoys?) we are presented with a cast of characters from feuding Greek-American families. Dita (real name Aphrodite) was Cass’s girlfriend at the time of the bloody homicide. Cass has confessed, but was he really the murderer?

Dita’s paterfamilias is a big deal named Zeus, who at the time of the murder is a rich property developer, running for governor. The death of his daughter is ultimately the death of him.

Aphrodite. Zeus. A chorus of characters. Get the picture? This is a Greek tragedy wrapped in a who-done-it.

Cass has an identical twin brother named Paul, who since Dita’s murder has risen to a position of prominence as both a lawyer and popular candidate for mayor of the Chicago knockoff community that is Turow’s Kindle County. (Turow revives a couple of his earlier lawyer characters, Sandy Stern and Ray Horgan, for minor roles in the story.) Cass and Paul are so tight, each so much a part of the other, that they are less than a hair’s width shy of oneness. The thought of Cass spending so many years in prison is dangerously unacceptable to Paul. He simply cannot be separated from his twin that long so he stays in constant contact with letters and jail visits. Their mother, Lidia, worships her sons. And Lidia has a secret. As do others.

The plot is pushed this way and that by two private investigators, both in the employ of Hal Kronon, the late lamented Zeus Kronon’s son, who has not only inherited his dad’s fortune, but has enlarged it to gigantic proportions. Hal is incensed at Cass’s release on parole as the 2008 part of the story begins. He uses these two PI’s to find out exactly what happened on the night of his sister’s murder.

The investigators have their collective foot on the accelerator that drives Turow’s plot. The first is Evon Miller, a young former FBI agent and out-of-the-closet lesbian with woman troubles of her own. The second is Tim Brodie, an 80-something widowed gumshoe with bad knees and worse eyesight, who happened to have been the investigating cop at the time of the homicide. Both are well-drawn characters, with whom it is a pleasure to spend a book’s length of time.

The plot winds here and there, then back to there and here again. Beware of the along-the-way hints as to the actual killer’s identity. They may be on the money, or simply fool’s gold. When you think you’ve got it, most likely you haven’t, so keep going.

There are times when Turow uses his characters’ first names and others when he uses their last names. I found it mildly confusing, but that probably will not bother most readers. There is a lot going on in this book, with plot twists galore. Perhaps not to everyone’s taste, though if you’re a serious mystery fan you’re likely to love it. Unless you possess a really astute memory, it’s best to read this book without putting it down mid-story for too long. If you do, some backtracking might be necessary.

If Identical falls shy of Turow’s masterpiece Presumed Innocent it most certainly is well within its shadow. A sort of non-identical twin.

Ron Liebman is a lawyer and the author of several novels including, Death by Rodrigo and Jersey Law (Simon & Schuster).

The Sunshine Girls: A Novel

On sisterhood, friendship, and the secret lives of our mothers.