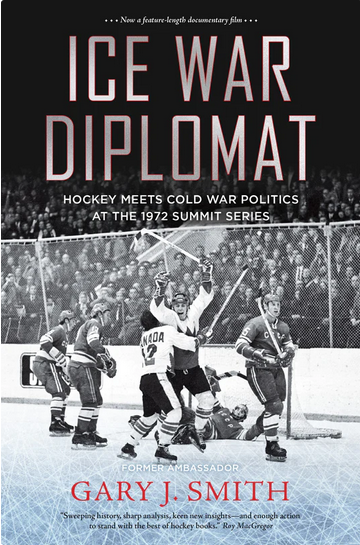 When Canadian and Soviet ice hockey teams faced off in the 1972 Summit Series, most fans on this side of the Atlantic expected Canada to easily win given the plethora of NHL stars on its roster and the Soviet team’s “amateur” status. Instead, the contests were fiercely competitive and the finale nail-bitingly close.

Memories of the series are treasured in both Russia and Canada; on significant anniversaries, players, coaches, and officials from both sides have gathered for reunions amid substantial hoopla and media attention. With 2022 marking the 50th anniversary of the competition, at least three other books have been published about the series and a documentary film released.

In Ice War Diplomat, former Canadian ambassador Gary J. Smith offers a unique perspective on the events leading up to the tournament and the competition itself. Arriving in Moscow in February 1971 as a 28-year-old diplomat with just four years of experience, Smith led for the Canadian side the uncertain and often tumultuous negotiations that enabled the series to take place at all.

Canada had adopted an explicit policy of using sports — especially hockey, its national sport — to further diplomacy. With Canadian Prime Minister Pierre Trudeau and Soviet Premier Alexei Kosygin having committed to the series, negotiators were under pressure to ensure it took place as expected. However, agreements had to be reached on a large number of details, including uniform colors, roster sizes, venues, press arrangements, ticket and hotel availability for spectators, and even Canadian players’ ability to dine on their customary pre-game steaks prior to the matches held in Moscow.

Smith relates the tale of these negotiations with the drama of a gifted storyteller. He weaves such a good tale that readers need have no knowledge of hockey’s intricacies or the series’ outcome to enjoy themselves. The book — which emerged from an initiative by Canada’s Retired Heads of Mission Association to publish personal narratives by former Canadian ambassadors — recounts Smith’s experiences of the period, and readers can’t help but empathize with the tension and uncertainties of the negotiations even as they enjoy his omnipresent sense of humor and inability to take himself too seriously.

The tale of the negotiations leading up to the competition is merely the prelude to Smith’s story of the Summit Series itself, during which he accompanied the Soviet team to Canada, traveled with them, and served as their escort and interpreter. This meant that he not only had unique access to the matches but also a front-row seat to the behind-the-scenes happenings, including ensuring that members of the Soviet delegation could shop for pet medicines (to take home) and watch the latest Hollywood hit, “The Godfather.”

As a second act, Smith returned to Canada’s embassy in Moscow and served as the liaison and advocate for the Canadian team during their matches in the USSR. Drama there included sneaking Phil Esposito to a clandestine medical appointment when the Canadian hockey star awoke coughing up blood.

Ice War Diplomat also features anecdotes that illustrate the daily life of a junior diplomat in the 1970s. Sometimes, Smith was engaged in the heady work of devising arguments that might persuade other countries to sign arms-control treaties. Other times, he drew notetaking duty. When the USSR invaded Czechoslovakia, Smith (as the lowest-ranking officer present) contributed to Canada’s diplomatic-crisis task force by fetching sandwiches. “Instead of recording options and decisions,” he relates, “I ended up taking orders for egg salad and ham and cheese…peace or war for me at that moment had become a question of mayonnaise or mustard.”

When stationed overseas, a diplomat’s job has other dimensions, too: reporting on developments in country, negotiating agreements with the host government while representing his own nation’s positions, and organizing meetings and visits. Smith provides vivid memories of performing these duties in Moscow during the Cold War. The Soviet Union was a poor, oppressive, and closed society at the time. Ordinary citizens struggled to eat, yet Western diplomatic missions had fresh milk, fruits, and vegetables brought in weekly from Helsinki.

It was unclear who in the Soviet government was making decisions, so the Western embassies looked for clues to help them figure out who was in charge and what their objectives might be. Meanwhile, the KGB engaged in constant efforts to intimidate, recruit, and spy on Westerners in the country. Engaging the Soviet people was difficult; citizens were conditioned not to speak to foreigners.

Nevertheless, the charismatic Prime Minister Trudeau wanted to demonstrate that Canada could exert international influence independent of the United States and to establish better relations with the USSR. The Summit Series was a major initiative to advance those goals. What better way, after all, to assert Canada’s place in the world than through its marquee sport? Trudeau was lucky to have talented diplomat Gary J. Smith to bring his vision to life. And readers are lucky to have Smith — now a talented writer — to bring us along on the journey.

Todd Kushner is a retired U.S. foreign service officer. The views expressed are his alone and do not represent the views of the U.S. government.