I You We Them, Vol. 1: Walking into the World of the Desk Killer

This massive assemblage of 20th-century atrocities seeks to shine a light on the “banality of evil.” 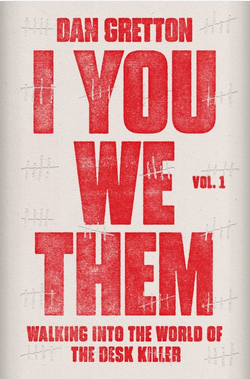 Dan Gretton’s engrossing but meandering I You We Them is an insightful and somewhat terrifying look into the corporate engines behind several of the most significant atrocities of the 20th century. A warning, though: This book runs 1,000 pages before you get into the vast explanatory notes at the end.

In his work, Gretton dives deep into the minds of those who sat in offices orchestrating tragedies that then unfolded sometimes thousands of miles away. These perpetrators, he posits, were just as complicit as those who actually pulled the triggers.

The term “desk killer” (in German, schreibtischtäter) from the book’s subtitle was first popularized by Hannah Arendt in her own exploration of the architects of the Holocaust. It can be applied, however, to any of the actors who sat back and allowed politics or profit to blind them to the horrors they enabled.

I You We Them is more than a recap of the past century’s greatest shames, however. Instead, Gretton intersperses his research with anecdotes from his own life, weaving into the narrative lost loves, past family tragedies, and current joys. In doing so, he shares with us how his studies have impacted him and those around him.

The Holocaust necessarily takes up most of the book. Gretton is unsparing in his review of the mindset of Nazi architect Albert Speer, who designed the technology and infrastructure needed to exterminate millions of people in concentration camps. While 20 years in Spandau Prison hardly seems like enough, Speer at least was punished.

But what about the companies that enabled him, such as IBM, which provided computer support to track the murdered? What about Deutsche Bank, which funded Auschwitz? What about Saurer, which built the “killing vans” that achieved more efficient slaughter? The author speaks with representatives of these companies, all of whom view the past as something best forgotten. They were, after all, “simply doing their job,” as the pathetic explanation goes.

A more contemporary example is Shell, and its complicity in human-rights violations in Nigeria, where the oil company’s gas-extraction process led to widespread environmental destruction. In response, Ogoni tribesmen organized protests against the company and its practices. But Nigeria’s totalitarian leaders, in bed with Shell, soon trumped up charges of terrorism and hanged nine Ogoni leaders, leading to global condemnation.

Shell’s response? They could not intervene in a sovereign nation’s justice system. Of course, by propping up the regime, that’s exactly what they were doing.

Surely, the “desk killers” who made the decisions at companies like Shell should be judged by the same standards as those who — physically and directly — hanged dissidents, exterminated Jews, and built crematoria to cover up their crimes. Yet these companies escaped justice and thrive today.

The United States government is far from innocent in empowering its own “desk killers,” the author makes clear. Drone pilots sitting in Colorado unleash hellish fury on targets in Afghanistan, sometimes slaughtering bystanders in the process. Are they less guilty because they simply pushed a few buttons on a keyboard?

And what of the desk killers who authored the Bush-era “torture memos”? These bureaucrats, sitting comfortably in Washington, found it possible to draft detailed memoranda outlining exactly how often intelligence officers could waterboard suspects, making them believe they were about to drown, or how naked they were allowed to keep suspects (and in front of how many people).

Gretton then wonders how the children of those responsible reacted when the memos came to light. How do you look at your father, knowing he wrote the justification and roadmap for the profound suffering of another human? The detached, clinical evaluations of these bureaucrats sicken the reader.

As noted above, it is the mundane nature of the desk killer’s work that shocks us most.

Gretton does not fully embrace Arendt’s “banality of evil” theory, but the term reflects the quotidian nature of planning a death camp or drawing up insurance policies to cover its victims. A day at the office for the typical desk killer hardly includes overt references to executions or exterminations, but it doesn’t need to.

You would think Gretton’s interlacing of his own story with those of these killers would detract from the intensity of the larger tale, but it does not. Rather, it enhances the commonplaceness of it all. You are carried along by the author in his wanderings and relations, as well as in his litany of terrors. The simplicity of his journey makes starker the choices the desk killers made.

If there is one question nagging this daunting work, it is this: Who will take the time to read this impressive book of nightmares? This is only volume one, after all. Gretton has another massive opus ready to go.