This Scandinavian crime novel is not what you think it is. 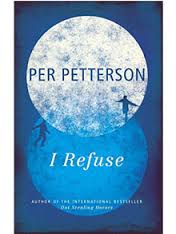 Once you reach the middle of Per Petterson's I Refuse, a realization dawns on you, or at least it did on me. "I've been tricked," you think. Hoodwinked. This isn't the novel I expected. Not another well-written, compelling, and cool Scandinavian mystery. Well, actually, it is all those things … just not in the way you might expect.

If you're anticipating an intricate, fast-paced plot, the likes of which have been published in great numbers stateside since Stieg Larsson's Millennium Trilogy burst on the scene, this isn't it. Instead, it's a psychological study, a mystery of fate and time. One that is ultimately haunting in a more lasting way than any whodunit.

Two old friends, Tommy and Jim, well into middle age after taking divergent roads as teens, have a chance encounter at the start of the novel. We then move back and forth through their stories. At the outset, it seems we're taking that same well-traveled and enjoyable route.

Then comes violence in its worst possible form: the kind perpetrated against children. Tommy and his three sisters (Siri, who is close to him in age, and younger twins) were left with their father on the outskirts of Oslo in the 1960s by a mother who couldn't bear another moment with the volatile, depressed, and angry man; who refused to be tied to someone who took his rage out on his family.

Finally, heart-achingly, Tommy realizes he can no longer protect his sisters and something must be done. What's done is the meting out of a measure of the violence Tommy has endured.

But rather than the kicks his father subjects his children to, Tommy opts for a baseball bat. The next day, despite a mangled leg, his father is gone, and this is where I thought, "Of course: Tommy killed him, and Jim helped get rid of the body, and that's what went so wrong between them."

I won't spoil what actually happens. But I will say that when we refuse, we also choose. Whether consciously as an act of defiance or point of pride, or as a kind of resignation. Whatever the impetus, there are consequences. And they are haunting, especially for the characters in the pages of this book.

Petterson wrangles these choices with relative ease, though his style takes some getting used to, including terse sentences in which the syntax can be a bit cold. But then come smoother, inspired turns of phrase that leave you in awe.

At times, the detailed accounts of the traffic patterns into and around Oslo can get old. That said, those scenes are the stuff of a life. Just as much, if not more, than the dramatic, the mundane shapes character.

The mundane can also become dramatic, which we see time and again here. The offhand comment that leads to tension that erodes a relationship. The rote visit to a café made with timing that is just shy of fateful.

The boring can, over time, shape who we are and how we make our way in the world. It can build and end our friendships and bring about change we cannot fathom.

I refuse to tell you any more about I Refuse for fear of spoiling the subtle, powerful build of the plot. But I insist you read it.

Tayla Burney is a producer and de-facto books editor for “The Kojo Nnamdi Show” on WAMU 88.5 FM in Washington, DC. Find her on Twitter at @taylakaye