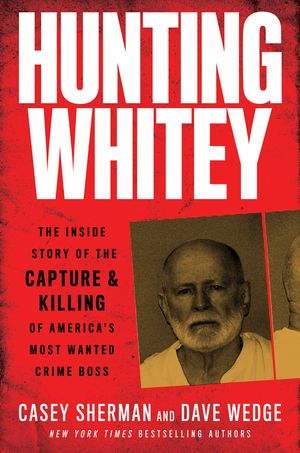 The 50-year murderous reign of infamous Boston gangster James “Whitey” Bulger ended on an oily parking-garage floor in Santa Monica in 2010. In Hunting Whitey: The Inside Story of the Capture & Killing of America's Most Wanted Crime Boss, Boston journalists Casey Sherman and Dave Wedge take readers through the FBI’s pursuit of Bulger during his 16 years on the run, his arrest, the two-month trial (and conviction) that followed, and the final “Misery Mountain” deadly prison drama that would end his life in 2018 when he was 89.

Sherman and Wedge’s goal in writing the book was “to deconstruct the mythology surrounding James ‘Whitey’ Bulger and to apply greater focus on the men and women who banded together over a span of decades to bring this monster to justice.”

The authors researched over 70 letters written by Bulger in prison and interviewed dozens of people who had intimate knowledge of the case, including Bulger’s family members and law enforcement. The interviews also include conversations with Bulger’s brother, Billy; the convict accused of murdering Bulger in prison, Freddie Geas; and former FBI director Andrew McCabe.

Bulger and his girlfriend, Catherine Greig, fled Boston on Christmas Eve 1994, embarking on a multi-year evasion of arrest, their journey reminiscent of Bulger’s heroes, Bonnie Parker and Clyde Barrow. In fact, Bulger envisioned himself a proud patriot and veteran, a “gentleman gangster,” and a modern-day Robin Hood; many in his South Boston community idolized him as their glamorous folk hero.

Number two on the FBI’s most-wanted list after Osama bin Laden, Bulger had already eluded the FBI for 14 years when Assistant Special Agent in Charge of the Criminal Division Noreen Gleason accepted the task, in 2008, of apprehending the crime boss. The FBI assigned Gleason a mission that had so far proved impossible, thanks in part to dirty law enforcement upending the investigation and assisting Bulger in his escape.

“The Whitey Bulger case was the proverbial white whale of the FBI. Gleason might as well have said that she wanted help finding Bigfoot,” the authors write. But she had a plan.

In a novel approach, Gleason shifted the focus of the Bulger Task Force to the women in his life. “For most male criminals, their downfall is their women — their wives and girlfriends are their weak links.”

Although “America’s Most Wanted” featured Bulger 16 times, he continued to dodge authorities. But the FBI would now ask for the public’s help in finding Greig, launching a massive television campaign which brought her picture into homes across the country.

Greig’s friendly nature, her loneliness, and her love of animals would be the couple’s undoing. The modern-day “Bonnie and Clyde” were arrested in Santa Monica in 2010, Bulger charged with 19 counts of murder, racketeering, narcotics distribution, and extortion.

The investigation and testimony in the resulting trial exposed corruption within the FBI and the district attorney’s office, and unveiled that Bulger was a major FBI informant, giving information about the Italian mafia in exchange for impunity for his own crimes. Ironically, witnesses labeling him "a rat" incensed Bulger, disturbing him more than the evidence of the brutal murders he committed.

Sherman and Wedge have ably debunked the legend of Whitey Bulger — a self-styled protector of the downtrodden. Facts from their research reveal the heinous truth about this Irish Robin Hood: Bulger was a cold-blooded, psychopathic killer. Hunting Whitey fills in the missing pieces in the story of Bulger’s time in hiding and subsequent prosecution, and is a testament to the dedication of men and women in law enforcement who prevailed in their decades-long pursuit of justice.