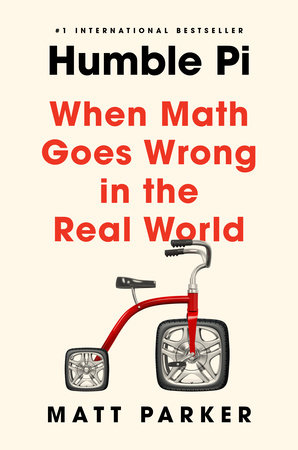 If your list of things to be grateful for feels meager, ponder how much of the modern world runs on math and — here’s where the gratitude comes in — how little you have to think about it. Math hums quietly along, making things work: construction, financial markets, transportation, and much more.

It’s largely out of sight and out of mind…until something goes wrong.

In Humble Pi, “standup mathematician” Matt Parker examines a bewildering array of math mishaps with a light touch and dry wit. His investigation ranges widely, including calendars, bridges, rockets, and fraud. He makes a compelling case that you shouldn’t use spreadsheets as databases (he can pry Excel out of my cold, dead hands). He even discusses Michael Larson, who broke the game show “Press Your Luck” by memorizing the board’s cycles, which everyone assumed were random. No Whammy, indeed.

Perhaps my favorite anecdote is how an exercise class forced the evacuation of a 39-story building in South Korea. The resonant frequency of the students jumping matched that of the building, mimicking an earthquake. The kicker? The song that caused the trouble was “The Power” by Snap. Anyone else remember this overplayed abomination? I find it extra cringeworthy because it reminds me of high school.

Of course, things could have been worse. Imagine what a Justin Bieber song would do.

There are several pitfalls for books like this, and Parker largely manages to avoid them. The first is simply being too technical. I’ve encountered such books before. But, along with wit, Humble Pi is conversational in style. It’s also largely conceptual, rather than focused on the nitty-gritty of equations and formulae. Many of the foibles described aren’t about math itself so much as about what can go wrong when it’s done by computers.

Mistakes occur when numbers are translated to binary, when code is broken, or when systems don’t work properly together. This is very different than planes falling from the sky because someone forgot to carry the two.

The second potential pitfall is dullness. Refreshingly, Parker doesn’t abandon all pretense of humor after the first few pages. The text moves quickly. And stuff from this book kept popping up in my real life. The Enron email data set came up during a professional training: People have done textual analyses of these emails.

(If “The Power” didn’t make your skin crawl, imagine someone doing a text analysis of your work emails. Or, worse yet: your tweets.)

Parker’s discussion of “salami-slicing” mirrored an online chat by Washington Post food critic Tom Sietsema, who tackled the inexcusable habit of restaurants rounding to the nearest dollar when giving change.

The final pitfall is that readers wonder, what’s the point? Parker does a mixed job on giving the book a larger meaning. He delves deep into how systems set up to prevent mistakes may themselves fail. Redundant checks are insufficient when errors line up, allowing them to pass through the vulnerabilities in each line of defense. Parker labels this the “swiss cheese model” and traces a few remarkable examples in engineering and airplane safety that led to near misses or, in some cases, tragedy. This is fascinating and important reading.

Less compellingly, he argues that one reason we so often mess up math is that our brains aren’t built for it. One problem with this argument is how much of the book focuses on computers rather than human brains. For example, there’s but one chapter on statistics, when the topic could fill a multi-volume tome covering everything from the bad polls that lulled people into complacency in 2016 presidential election to the ever-changing headlines about whether (insert your favorite food or drink here) is a panacea or poison.

The other issue with the argument about our brains not being properly wired to deal with higher mathematics is that, even if true, it’s not the only reason we make mistakes. There are plenty of things we’re well-designed to do that we still muck up. Our brains are exquisitely wired for language, for instance, and look how badly we’re doing there. The world is a cesspool of bad translations, sloppy sentences, and grammatical errors.

A recent real-life example: While visiting a government agency for work, I noticed a doorway marked “Mother’s Room.” Intrigued — getting your mom her own room in a government building sounds like something only Ben Carson would do — I peeked inside, at which point the room’s purpose dawned on me.

I applaud all efforts to make offices friendlier for mothers. But no one should have to deal with misplaced apostrophes in the workplace. No one.

In case you’re wondering, the door was open and the room empty, so this foray didn’t end with my having to register as a sex offender. Still, I’ll bet dollars to donuts that, over the course of human history, language mistakes have hurt or killed far more people than have math errors.

Read Humble Pi. You’ll learn some stuff. You’ll occasionally laugh. You’ll be forced to acknowledge you’re misusing Excel…even if you refuse to do anything about it. And the next time the mathematical poop hits the fan, you’ll have a more enlightened view about the many ways it might have happened.

Josh Trapani contributes to the Independent once in a while and abuses Excel pretty much every day.