House of Gold: A Novel

A family saga of love and wealth in WWI-era Europe. 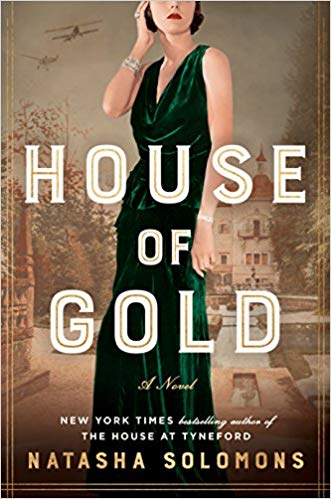 Set in the years leading up to the Great War, House of Gold explores the lives, loyalties, and power of a Jewish family of bankers, the Goldbaums, between 1911 and 1917. The Goldbaum men manage the wealth of Europe, a premise that may ring with familiarity: The Rothschild family empire, which has been in existence in one form or another for more than 200 years, undoubtedly inspired this novel.

In author Natasha Solomons’ story, the Goldbaums are the money lenders and investors; yet, as with all Jews in Europe, they face anti-Semitism. Indeed, the struggles of Jewish people throughout the Continent is an integral part of this story and a vivid reminder that discrimination against Jews existed long before the atrocities of World War II.

The Goldbaum family has a legacy of commitment to their status as the financial backbone of pre-war Europe. However, they do not foresee the potential complexities of one family managing the major lending institutions of Britain, Germany, Austria, France, and Italy, especially on the precipice of the Great War.

I am not a student of the Great War, international banking, or gardening — an integral element of the story, by the way — but this book offers a wealth of historical information without taking the reader out of the story. But what I enjoyed most was how much I grew to love these characters (some, desperately).

Solomons is skilled at showing what big money looked like, smelled like, and even tasted like during the waning years of the Edwardian era. The descriptions are lovingly presented and lead the reader directly into the homes, gardens, and war zones where the story takes place.

A storyteller who knows how to bring characters to life, Solomons weaves an excellent literary romance, as well. Protagonist Greta Goldbaum is a woman plagued by inner conflicts. She longs for the freedom to live a life different from her mother and other Goldbaum women, who are mainly the wives of great men and the bearers of their children. Her struggle to achieve the best possible version of herself is filled with missteps, but eventually, her gains lead to the kind of love she has dreamed of.

Betrothed to Albert Goldbaum, a distant cousin and a Brit living in London, Greta isn’t keen on what she’s heard of him — mainly, that he spends an inordinate amount of time mounting insects, particularly butterflies. After moving to London from Vienna, she spends the first half of the book, in between exposure to the political intrigue of the Goldbaum banks, focusing on her garden, which becomes a bridge to her restrained husband.

By the time the two find love within their marriage, other family members are misbehaving: gambling and falling in love with the wrong people (among other naughtiness) as the war looms.

The second half of the book continues to raise questions about marriage, women’s rights, and the tough choices of the era, set alongside the ever-present themes of the Jewish diaspora, particularly the mass exodus of Jews from Russia. While the Goldbaums are somewhat insulated from the most brutal forms of hatred, they face difficult moral choices that threaten to put them on opposites side of the war.

If the author set out to write a “sweeping family saga,” she has accomplished her goal. But while some of the elaborate descriptions added to the story tremendously, others slowed down the narrative. Also, I had to adjust to some “head-hopping” when one character’s point-of-view shifts within the scene to another’s. At last, though, Solomons’ skill triumphed, and I soon began to look forward to getting inside the head of yet another character in the scene.

What I missed most, however, was the chance to spend more time with Greta and Albert, and with the goings-on in London. Still, the last quarter of the book delivers a dramatic, even cinematic, climax that will keep readers turning pages until they reach the end.

Denny S. Bryce is an aspiring author of historical fiction and urban fantasy. A three-time Romance Writers of America (RWA) Golden Heart® finalist, she loves marketing, fanfiction, and travel. She is represented by Nalini Akolekar at Spencerhill Associates.