His Father’s Son: The Life of General Ted Roosevelt Jr. 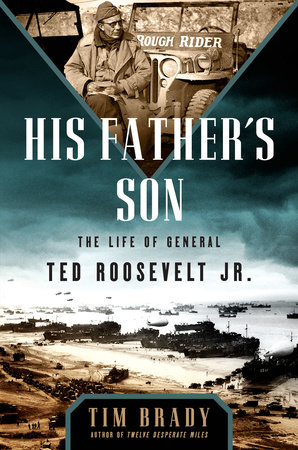 After reading His Father’s Son: The Life of General Ted Roosevelt Jr. by Tim Brady, you understand why military service fired the passions of the 26th president of the U.S. and dominated the lives of his four sons.

Brady’s biography of Ted Jr., the first son of Theodore Roosevelt, offers only a few sentences about the cloud that hung over the patrician family. Theodore’s mother, Mittie, to whom he referred as “an unreconstructed Southerner,” had insisted his father not enlist in the Union army and oppose her three brothers, fighting for the Confederacy. So, to placate his wife, known to lock herself in a dark room for days, Theodore, Sr. paid a substitute to serve for him during the Civil War.

Brady provides no further information about this decision, which was not uncommon at the time but potentially subjected the Roosevelts to ridicule. As historians put it, those able to purchase a substitute exercised “the right of the rich to hire the poor to do [their] fighting and dying,” a practice that became a factor in the New York Draft Riots of 1863.

Even without a biographer’s knowledgeable insight, you don’t have to be Sigmund Freud to see why Mittie’s sickly, asthmatic son, Theodore, transformed his weak body into a muscular machine and charged into history, banging the drum for war in 1898. He created his own special forces — the Rough Riders — and stampeded with them into Cuba, storming up San Juan Hill and seizing everlasting glory.

Glamorized by press coverage at the time (and by his own well-written recollections of the Spanish-American War), Theodore Roosevelt sailed into politics as a national hero and was elected governor of New York. He ran as William McKinley’s vice president in 1900 and, months later, following the president’s assassination, TR, as he was fondly known, moved into the White House with his wife and six children. He was elected president in his own right in a 1904 landslide victory.

Always a big-game hunter, he endeared himself to the country when he refused to shoot a sick bear on a hunting trip, demanding instead that the poor animal be put to sleep. A cartoon of the normally bellicose Rough Rider protecting a frightened cub enthralled the public imagination, and soon, stuffed “Teddy” bears became a favored toy of children around the world. By 1927, the visage of Roosevelt was being chiseled on Mt. Rushmore alongside George Washington, Thomas Jefferson, and Abraham Lincoln.

But none of this is contained in Brady’s biography of Ted Jr., perhaps because the writer assumes readers will come to his book already grounded in Roosevelt history and simply intuit the immense expectations attendant upon being the firstborn son of such a remarkable man.

Brady tells us that Ted Jr., an anxious child with crushing headaches, a wayward right eye and few pleasing features, grew up emulating his adored father, as did his three brothers — Kermit, Archibald, and Quentin. Their sister, Ethel, is barely mentioned, and there’s not much on Archie, a right-wing Republican who lived to be 85, railing against Communists.

Their colorful half-sister, Alice, is remembered for writing that their father always wanted to be “the bride at every wedding and the corpse at every funeral.” The girls married well, and the boys pleased their father by going to war — WWI and WWII — with all receiving medals for bravery and ribbons for valor.

Ted Jr., an Army brigadier general, was heralded for exceptional rapport with his troops. Having served in the First World War, he begged to serve in the second and, despite war wounds and age (56), he was allowed to lead a division on D-Day, becoming the oldest man to land on Utah Beach, the westernmost of the five landing spots in Normandy.

Decades later, General Omar Bradley wrote: “I have never known a braver man, nor a more devoted soldier.” The night before the invasion, a private named Amos Buck wrote to his commanding officer about “General Teddy”: “[T]he men all know he is a front line general and respect and love him…you have no idea how much good a man of that type does with a bunch of scared inexperienced G.I.s.”

Weeks later, General Teddy was struck by coronary thrombosis and died in his headquarters a few weeks short of his 57th birthday. He was buried in the cemetery at Ste. Mère-Église, but in 1955, he and his late brother Quentin were moved to the American Cemetery at Normandy.

In retrospect, the strangest death for the Oyster Bay Roosevelts was the 1943 suicide of Kermit, which Brady barely mentions. He writes that Kermit, while serving with the British Army in WWI, was unable to maintain sobriety, so had to be discharged.

Returning to the U.S., Kermit dried out and, during WWII, he re-enlisted as a major in the Army. He took a mistress, started drinking again, and was hospitalized with what was gently reported as “recurrent illnesses.” Brady writes that while stationed in Alaska, “exhausted by the…failures of his life miserably sick and tired, Kermit put the barrel of his service revolver beneath his chin and pulled the trigger.”

Brady does not tell us that the War Department told Kermit’s mother he died of a heart attack, and that the New York Times reported his death of “natural causes.” In fact, his suicide was not revealed until the 1980 publication of Sylvia Jukes Morris’ biography, Edith Kermit Roosevelt: Portrait of a First Lady. Ted Jr., who did not know the real cause of his brother’s death but had witnessed his dissolution over time, wrote: “He really died five years ago.”

Surprisingly, Brady also does not chronicle the genetic predisposition of the Roosevelts to the alcoholic depression which ran in the family, affecting Kermit’s paternal grandmother, who exhibited signs of bipolar disorder; and his paternal uncle, Elliott Roosevelt, who suffered chronic bouts of depression and died of alcoholism, as did his maternal grandfather, Charles Carow.

Ten years after Kermit took his life, his son, Dirck, committed suicide at the age of 28. His death in 1953 was reported as a “household accident.” In 1957, Alice Roosevelt Longworth’s only child, Paulina Strum, depressed and drug addicted, committed suicide with sleeping pills.

Suicide seems to permeate a threnody in the family, beginning with the former president’s stated resolve to take his own life after contracting malaria and nearly dying during a 1913 expedition to the Amazon Basin. He said he could not fathom becoming a burden to others on the expedition. Kermit, along on the journey to South America to explore the River of Doubt (later named Rio Roosevelt), is reported to have helped save his father.

Four years later, when his brother Quentin was killed, Kermit edited an anthology of his life, including a short story Quentin had written about suicide. The first line of his morbid tale: “A service revolver is a terrible thing.”

Another eerie detail not included in Brady’s biography — and possibly another missed opportunity to assist in untangling the skeins of a life story — was the Roosevelt friendship with the poet Edwin Arlington Robinson, who wrote “Children of the Night.” Kermit discovered the book as a teenager and gave it to his father, who shared it with his Cabinet. The book contains the haunting poem of “Richard Cory, who glittered when he walked,” but then, “one calm summer night went home and put a bullet in his head.”

Like his father and his brothers, Ted Jr. loved poetry and even recited verses to reporters who traveled with him during the war. In fact, the best parts of Brady’s book are the quotes from Ted Jr.’s letters. He published several books and wrote well, placing an unsurmountable burden on his biographer. Yet, at times, slogging through this book was as onerous as the Roosevelt treks through the Himalayas and New Guinea.

In the end, Tim Brady best sums up his biography of a well-born man with a world-famous name: “As time passed, his story became a footnote in the family saga.”