Gravity Is the Thing: A Novel 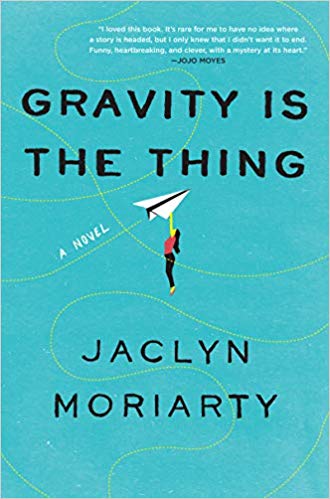 1. Gravity (n., standard English): seriousness, solemnity.
2. Gravity (n., scientific English, physics): that powerful, invisible force causing anything that goes up to come back down.
3. Gravity (n., poetic, suggestive English, Jaclyn Moriarty): the possibility of a missing person being dead and in the grave. Or not.

Jaclyn Moriarty’s title, Gravity Is the Thing, is a play on words signifying each level of her multifaceted, masterful new work. On one plane (the obvious, plot-driven one), Gravity Is the Thing is about the possibility of human flight. It asks readers to consider: Can humans fly if they believe they can?

Moriarty’s characters receive cryptic instructions on human flight — and other things — from an unknown source, and they take classes from an instructor who doesn’t know how to fly. But they may just give wing-less aviation a shot.

On the layer beneath, at the level of nuance and main-character development, the book is about authenticity. Gravity Is the Thing looks at protagonist Abi’s ability to represent her truly funny self in a mature manner in which her anxiety won’t manifest as silliness.

The book wonders aloud about when it’s a good time to be serious — grave in demeanor, that is — and when it’s okay to be weird. The central question here is about dropping façades and finding enduring meaning to get through life. For Abi, it’s an unending series of self-help books and quasi-religious fads.

And, finally, on its most foundational level, the book is a several-hundred-pages-long inquiry into the whereabouts of Abi’s brother, Robert. As a teen, he disappears without a trace, taking Abi and each member of her family through prolonged and hellish despair.

If Robert was dead, and known to be so, there would be some bottom to the family’s grief. But without him or his body, without some understanding, without a funeral or a grave, the pain remains on the playing field of their lives.

Gravity — on this level of meaning — is the thing she needs. Abi needs a grave of some sort for Robert, and she may or may not ever get one. Regardless, she needs to learn to stand in serious connection to her life and its difficult patterns.

But she also needs whimsy — romance, the fancy of flight, or something transcendent of both the mundane and tragic. Despite her rocky road, Abi keeps her sense of humor and delights readers with some hilarious internal monologue. The book is a joy to read.

In many ways, Gravity Is the Thing is straightforward existentialist literature. (Or is it magical realism?) In nonlinear and sometimes episodic fashion, the book tells the story of Abi and Robert’s close relationship, his disappearance, their family’s attempts to find him, and their various ways of coping. This storyline arises out of life’s uncertainties, fully illustrates despair, depicts Abi’s frantic attempts at finding meaning in life, and posits being and becoming as self-creating roads to authenticity.

At her most lucid moment, the least humorous in the book, Abi realizes: “For many years I have carried around a vast absence of knowledge. My brother’s disappearance is an epistemological wasteland. I carry this wasteland in my arms, piled before me, or I drag it behind me.”

Abi’s got to wrangle with despair and uncertainty in order to succeed.

In a more straightforward but not entirely linear fashion, the book also tells the story of a group of people who receive anonymous communications their whole lives. They end up together on a retreat in which they are put through a series of seemingly meaningless tasks that eventually sort them out for “flight school.”

At the school, they do all manner of things that prepare them to step off the precipice of a building — or life! — and fly. The book is riveting, and it resolves with a delightful series of twists. By the end, it is likely to have readers dabbing their eyes and smiling, surprised at how it all came together and convinced of Moriarty’s genius.

Readers may find it difficult to connect with pre-solemnity Abi, the Abi whom we meet at the opening of the book. Those who need to connect to characters could quickly lose patience, but Moriarty is always taking us somewhere. Stick with Abi and you’ll be fully absorbed in her family’s story, hopeful for resolution about Robert, and curious about whether these oddballs are really going to fly.

Sarah Trembath is an editor, writer, performance artist, and educator. Her work has appeared in the Santa Fe Writer’s Project Quarterly, the Rumpus, Everyday Feminism, Sally Hemings Dream zine, Azure literary journal, DCist, and the Grace in Darkness anthology of DC women writers. Her first book, a collection of poetry and prose on coloniality, race, and class called This Past Was Waiting for Me, came out in 2018. Her collection of poems on temptation and loss, It Was the Scarlet that Did It, is due out this month. She is a graduate of Temple University in Philadelphia and Howard University in DC and is on faculty in the Writing Studies Program at American University.

Half an Inch of Water: Stories

A darkly magical assortment of tales that embraces both unrelenting suffering and life’s small, saving graces.

Modern relationships in San Francisco, under the spell of Queen Titania from “A Midsummer Night’s Dream.”