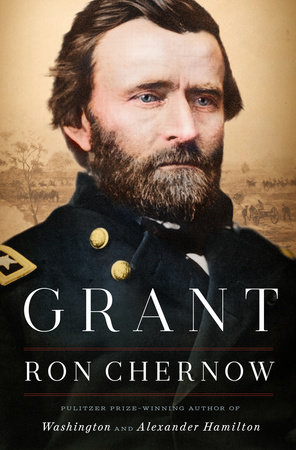 Ron Chernow has dedicated his latest book, Grant, “to my loyal readers, who have soldiered on through my lengthy sagas.” This new work will not disappoint them.

As in his previous biographies, Chernow once again offers a close-up and personal look at his subject. Through sterling and hard-driving prose, backed by a stunning depth of research, Grant the man emerges on these pages. Chernow has those great gifts of a writer and scholar, and knows how to combine them to resurrect a life of someone readers thought they knew.

Grant is not by any means a hagiographic study of the Civil War’s greatest soldier and 18th president of the United States. For one, Chernow puts to rest all debate about Grant’s penchant for liquor. The general was a binge drinker. Hence, believes the author, Grant’s greatest accomplishment was not his victory in the Civil War, nor his allegiance to African Americans during and after Reconstruction. Rather, it was his ability to conquer his addiction through sheer will, well before the age of Alcoholics Anonymous.

(At times, Grant needed help to avoid the bottle; two of his steadfast supporters were his wife, Julia Dent Grant, and his longtime friend and aide-de-camp, John Rawlins. They knew to keep an eye on Grant and intervened when necessary.)

Chernow rightfully lauds Grant for his solid understanding of the political and military stakes of the Civil War era. Chernow’s Grant simply outgenerals his principal foil of the war, Robert E. Lee, pushing aside the “lost cause” notion that has elevated Lee to mythic status.

It was not the Union’s advantages in manpower, resources, and technology that defeated the Confederacy, says the author. Rather, it was that Grant understood how to manage those resources where others before him had failed. Nor was Grant a butcher, as some histories have suggested. He simply saw the map much more broadly and knew the value of coordinating Union armies in the field.

When the war broke out in 1861, Grant was a nobody, a down-on-his-luck Midwesterner overshadowed by a petulant, self-promoting, and craven father, and a father-in-law suspicious of his son-in-law’s political alignments. By all accounts, Grant’s track record by 1861 made him a failure. What rescued him was the Civil War, where he could finally demonstrate his military genius.

Grant brims both with stories of the carnage of the Civil War and of Grant’s ability to prevail in the face of it. From his snatching of victory from the jaws of defeat at Shiloh, to his stranglehold on the Confederate bastion at Vicksburg, to his final crushing of Lee’s Army of Northern Virginia during the Overland Campaign, Grant’s triumphs were legion.

Of particular interest to Chernow is the bond that grows between the general and President Abraham Lincoln. They often seemed like a pair of like-minded individuals who trusted each other even when separated by hundreds of miles.

Also of note is the relationship between Grant and his favorite subordinate, General William T. Sherman, who proved solid and sure on the battlefield. Following the war, however, the men’s kinship collapsed as now-President Grant sided with the Republican Reconstruction policies that irritated Sherman.

For all of Grant’s ability to lead men in battle, his biggest liability was his naivete and inability to judge non-military people around him. He was a soft touch — too soft probably — as, during his presidency, some of his closest aides took advantage of his position for personal gain. Grant just never seemed to “get it” when picking people as confidants and doling out political patronage.

While Grant was not personally tainted with the whiff of scandal during his presidency, many around him, like Orville Babcock and financiers Jay Gould and Jim Fisk, reaped great financial rewards while pushing the country into the worst economic depression of the 19th century. Even when confronted with damning evidence, Grant chose not to believe that the people close to him had used him.

This would be a recurring theme throughout Grant’s political life and would cast him, in the annals of history, as a bumbler and incompetent commander-in-chief. But Chernow rehabilitates Grant’s political reputation, defending his record on race and demonstrating his belief that the war had been fought principally to free the slaves and then protect their newfound liberties from those who sought to overturn the political ramifications of the South’s defeat.

(Grant supported emancipation long before it was popular among the ranks of Union officers. His record of standing up to the Ku Klux Klan is impressive, and he regretted not being able to do more to help those blacks being terrorized in the South once he was no longer president.)

For Chernow, one of the greatest chroniclers of Grant’s life was Grant himself. Despite rumors that Mark Twain helped the retired general pen his memoirs, Chernow argues that the recollections are solely the work of Grant’s hand. In Grant, the author lauds the general’s rich, compelling writings.

A sweeping drama with a lush cast of characters comes to life in Chernow’s masterful biography, as does the Civil War and Gilded Age America. While, at times, the story is sad, readers will be buoyed by recognizing just how good and decent a man was Ulysses S. Grant.

James A. Percoco is the Teacher-in-Residence at the Civil War Trust and is author of Summers with Lincoln: Looking for the Man in the Monuments. He is a member of the National Teachers Hall of Fame, Class of 2011.

The Fall of the Ottomans: The Great War in the Middle East

This history gives voice to Arab and Turkish witnesses to World War I and the eradication of an empire.