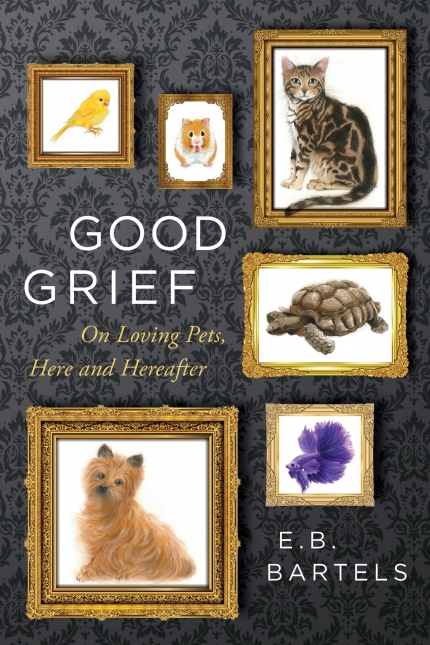 Our faithful furry, feathered, or finned friends can’t dictate advance medical directives. So, it’s no wonder that responsible people agonize over doing too much or too little (and doing it too soon or too late) when their pets are nearing the end. In Good Grief: On Loving Pets, Here and Hereafter, author E.B. Bartels looks at how we humans try to do right by our animal companions.

Using her own experiences as a framework, she provides perspective, offers reassurance, and does her best to convince readers they’re not alone — no matter how they’re feeling about or dealing with the inevitable end of a pet’s life. She wisely mingles heartwarming episodes among heartbreaking ones.

Roughly 70 percent of all homes in the U.S. include a pet, according to the American Pet Products Association. Much as we’d like them to live forever, typical lifespans for the most common pets (dogs and cats) are between 10 and 16 years.

Of course, we don’t always know when a pet’s days are numbered. Animals are good at hiding symptoms, and we’re good at denying problems. But accepting what’s coming and, when possible, planning for it can soften the blow. Bartels relates several instances of friends who put together parties or special last meals for their dogs to help ensure the last day was a good one.

Making arrangements with the vet ahead of time can help all concerned avoid the anxiety of an emergency trip to the clinic. A mobile vet can minimize stress by coming to the pet’s home — ideally providing hospice-like services as the animal’s health declines.

Among challenges vets face is recognizing and respecting that pet owners’ financial circumstances may play a role in end-of-life decisions. What’s more, while euthanasia is considered to be a “good death” that minimizes suffering, being the professional who wields the needle (and who is sometimes the last human the animal sees) can take a huge emotional toll.

Losing a pet is often a child’s first experience with death. In Bartels’ case, her first pet was a fish. When it went belly up, she did what little kids tend to do — tried as hard as she could to believe that it was still alive. She was sure she saw it move when it was being flushed.

It was traumatic enough that the author’s next floater got a decent burial and a funeral of sorts — the first of several such events Bartels has hosted or attended celebrating the lives of fish, birds, rodents, turtles, dogs, and horses. (She’s never been a cat parent and admits to being uneasy around felines, so her cat content here is a bit thin.)

Just as when a human passes away, seeing the animal’s body or holding a ceremony can provide some closure for survivors. Importantly, this applies to other pets, too: Seeing the body of their former playmate can help surviving animals understand what’s happened, lessening chances that they’ll howl or lose their appetites.

The same might be true for showing a pet the body of its deceased person. Almost a century ago, an Akita named Hachiko used to meet his owner, a professor, every evening at a train station in Tokyo. One day in 1925, the professor suffered a fatal brain hemorrhage at work. Faithful Hachiko waited, and waited, and went back to the station every day at the usual time until he himself died nearly 10 years later. (Hachiko is still there, in a way: There’s a statue of him at Shibuya Station, now one of Tokyo’s busiest.)

Waiting expectantly for a reunion is the notion behind the Rainbow Bridge story that’s comforted many bereaved pet owners since it began circulating several decades ago. Departed animals are said to be waiting patiently at the bridge, restored to full vigor, for their people to join them in eternal playtime.

The religious beliefs of pet owners sometimes play a role in final sendoffs, especially if those beliefs include reincarnation. In one of Bartels’ entertaining digressions, she happens onto a Buddhist funeral for a cat in Japan and explains that when people there make traditional annual visits to the graves of their ancestors, they sometimes also visit those of their pets.

Often, Fido’s or Fluffy’s remains end up in a hole in the back yard, making them easy to visit — until you move. Pet cemeteries provide a more stable solution, and there are more than 700 around the United States. Increasingly, it’s possible to bury pets and humans together in “whole family” cemeteries, much as ancient Egyptian tombs frequently included mummified people and animals.

Alternatively, after cremation, pets’ ashes can be returned to be scattered, interred, or kept in a place of honor. (It’s also possible to have a plaster cast made of the pet’s pawprint as a keepsake.)

If you think you might be going overboard with how much you miss a departed pet, think again. Some people really can’t let go: They hire taxidermists to resurrect beloved animals into lifelike forms. Others have a small amount of their beloved companion’s DNA harvested in hopes of cloning a near-identical replacement (results have been mixed).

Charles Dickens was so fond of his cat, Bob, that when the latter died, the famed writer chose to stay in touch (literally) by having one of Bob’s paws turned into a letter opener. And then there’s a Dutch artist who wanted his cat to be able to chase birds forever — so he had its body turned into a drone. (Naturally, there’s video on YouTube. It’s weird. You’ve been warned.)

Whatever becomes of our pets in the hereafter, Bartels concludes Good Grief by noting that our too-short time with them here reminds us “how important it is to be present in every moment.” The final moments can be the hardest, but readers might find that this book helps make saying goodbye a bit easier.

Randy Cepuch has had many reasons to hope there’s something to that Rainbow Bridge idea.