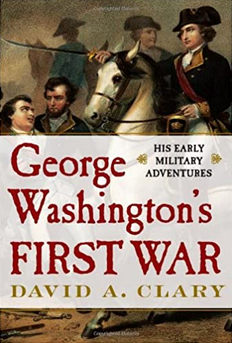 A soldier writing home usually tries to relieve his mother of worries by simply assuring her that he is safe. But here we have a soldier who describes a battle, mentions casualties and tells his mother, “I had four bullets through my coat, and two horses shot under me.”

The soldier was George Washington, a 23-year-old colonel in the Virginia militia, who had just fought in the bloodiest battle of the French and Indian War.

There was no glory in that rout, dubbed “Braddock’s Defeat.” Maj. Gen. Edward Braddock, commanding a force of nearly 1,500 troops, sent them into an ambush along the Monongahela River in July 1775. Braddock was killed, and more than 1,000 British Army soldiers and American militiamen were killed or wounded. Some cowards survived because they fled the carnage. But Washington, as he later said, believed he had survived because Providence had “protected me beyond all human expectation.”

George Washington’s First War follows the budding military career of a young officer who feels a sense of destiny. But David A. Clary does not treat Washington as a man of much promise in peace or war. Clary’s detailed account of Washington’s youthful soldiering portrays him as arrogant, foolish, immature, thin-skinned, and frequently incompetent — as when Washington’s and another Virginia unit accidentally exchanged fire in the dark, their “friendly fire” killing or wounding 40 men.

Washington’s life as a soldier began in the fall of 1753 when the lieutenant governor of Virginia ordered him to lead a mission into the “Ohio Country,” the vast northwestern wilderness claimed by both Virginia and France. Washington was told to find the French commander and instruct him to march his men out of the area. After a 300-mile trek, Washington delivered the eviction notice, but the French refused to accept it. On his return journey, Washington was shot at by an Indian and nearly drowned in an icy river. His widely published report on the mission made him a hero.

Virginia authorities next sent Washington and a small force into the disputed territory. He pounced on a French patrol, killing its commander and triggering a vengeance raid by the commander’s brother on Washington’s badly situated, makeshift fort. Clary, a former chief historian of the U.S. Forest Service, delivers a clear and vibrant account of the affair — Washington’s first venture into combat, and a rash attack that led to the start of the war.

Washington’s early military career included complex dealings with Indian leaders, who constantly shuttled their loyalties between the British and the French. Once, for instance, he found himself negotiating with about 40 delegates from the Six Nations of the Iroquois along with other tribes. In this encounter, as related by Clary, Washington condemned the “treacherous” French and turned stern: “Those that will not join us, shall be answerable, for whatever may be the consequences.”

Washington, facing Indians in peace and war, developed a respect for their style of combat. Unlike many British officers, he saw the need to adapt for battle in the wild. While leading a Virginia “ranger” unit along the frontier, he authorized his officers and troops to don what he called “Indian dress,” which Clary describes as “moccasins, leggings, breechclout, and a hunting shirt, a knee-length smock of linen, wool, or linsey-woolsey, drab and durable.”

Clary seems determined not to make Washington into an icon, frequently trying to cut him down to the size of an ordinary youth with aspirations. To Clary, Washington’s “adolescent outlook” explains “his tendency to shade the truth and pass responsibility for failure on to others.” When Washington writes a letter to a superior, Clary calls it “snarky” or “screechy.”

Twenty years after Braddock’s Defeat, Washington appeared in uniform before the Continental Congress, confidently expecting his destiny: commander in chief of the Continental Army. How did Washington, the lackluster officer of 1755, become the general of 1775 and the president of 1789? Clary’s dogged narrative of the war does not provide an answer. Perhaps there is none, beyond Washington’s belief in himself.

Clary does offer some ideas about the way Washington “transferred his personal experience” in the French and Indian War to the Continental Army. For instance, he had seen the British repeatedly fail to gather dependable intelligence. During the Revolutionary War, he established and personally supervised a highly effective espionage system.

The frequent mixture of politics and warfare Washington saw as a Virginia militia officer led him to accept the dominance of Congress. And this was perhaps his most valuable legacy, for he established the enduring American principle of civilian rule over the military.

Thomas B. Allen’s most recent book, Tories: Fighting for the King in America’s First Civil War, was published this past November by HarperCollins.