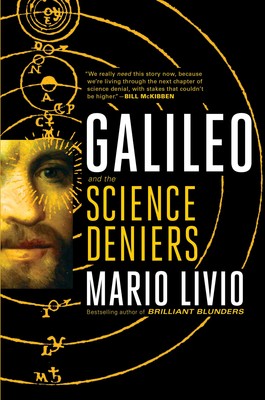 It’s a shame author Mario Livio couldn’t have waited a little longer to finish his latest book. For him to have been able to include the spread-eagled travesty of science denial that’s occurring in the face of covid-19 would have been for him to fully underline the dangers of allowing science to be interpreted and legislated by those who dismiss it.

As we’re being reminded in real time, a virus — just as much as any of the vast inner workings of the universe — does not require us to believe in it for it to be real.

Livio is an astrophysicist whose books, including The Golden Ratio and Is God a Mathematician?, serve to make complex subjects accessible to the general public. In Galileo and the Science Deniers, he shares a similarity with his subject, who published his own works in Italian rather than Latin to ensure that his words were accessible to a wider populace.

Galileo’s life unfolded in an age of religious tumult, cultural change, and resurgence of scientific inquiry and insight as greater Europe fully emerged into the Renaissance. Born the same year as Shakespeare, in 1564, he arrived just as Michelangelo died (and, in a neat hand-off to a successor, died a year before Newton was born).

Nicolaus Copernicus’ On the Revolutions of Heavenly Spheres, which asserted a sun-centric solar system, was published in 1543, the year its author died. Perhaps because Copernicus wasn’t available to promote his work, the theory did not get widespread attention — at least not from the Catholic Church — until scientific rock star Galileo put his significant weight behind it.

Son of a musician, and schooled in the arts, Galileo had a keen appreciation and talent for both music and art — his skill as an illustrator proved helpful in conveying his innovative concepts of planetary movement. Early on, he sidestepped a career in medicine when the study of geometry captured his attention.

Galileo’s contributions to the advancement of science are without parallel. He is the father of the scientific method, in which experimentation and detailed observation combine to support or disprove a given hypothesis. Among early innovations that made him stand out was his application of mathematics to the study of astronomy; until then, the two were considered to have no particular relationship.

Most critically, Galileo was responsible for bringing the newly invented telescope into accepted use, personally ensuring that quality instruments made it into the hands of fellow scientists and crucial influencers. His observations made sweeping, material changes to the prevailing beliefs about the universe, and the acknowledgement by church astronomers that the device represented a true picture of what it focused on was a major victory.

At the same time, Galileo’s embrace and promulgation of a Copernican view of the universe clashed with the church’s accepted Aristotelian model and came to be seen as a critique of certain religious articles of faith.

The Catholic Church was struggling with unprecedented challenges to its divine authority, which translated into challenges to its earthly political power and control. The combination of the Protestant rebellions and the rise of literacy in more common folk conspired to put the word of God directly into the hands of the people, without the need for priestly translation.

Add to that a growing body of scientific speculation about the universe that contradicted church teachings, and the backlash was often severe: It was mathematician Giordano Bruno’s postulation that the universe was infinite and filled with populated worlds that got him burned at the stake.

Ironically, Galileo was a faithful believer who was making no attempt to undermine or disagree with church teachings. Indeed, he repeatedly conceded that Scripture itself was infallible. His position was that if observation and experience put astronomy in conflict with Scripture, then it was the prevailing interpretation of Scripture that must be in error. He simply asked that science be left to scientists and that matters of faith be left to the church.

The conflict came fully to a head when, in an epic overreach, the church decided that matters of astronomy were, in fact, matters of faith.

Throughout his engaging discussion of Galileo and the forces arrayed against him, Livio highlights the similarities to current political and religious arguments against such science-based positions as the veracity of evolution and human-induced climate change.

One striking element of contrast that the author touches on somewhat obliquely is perhaps the most crucial: The church’s stranglehold on scientific inquiry had a chilling effect on free thought and the exchange of ideas, and pointedly hurt certain individuals — such as Bruno — but nothing the church believed, mandated, or proclaimed had any power to change the stasis of the sun or motion of the Earth. As legend has Galileo quietly observing at the end of his trial, “And yet it moves.”

The same is true for evolution: One’s belief or disbelief has no impact on evolution itself, which continues in real time.

The situation is entirely different with climate-change denial, or with the response to the coronavirus pandemic, where humans’ willingness or unwillingness to confront the scientific reality and take appropriate action materially impacts the outcome.

It took until 1992 for the Catholic Church to formally acknowledge that Galileo was right. Given the steady increase in global average temperatures — led by startling jumps upward in the planet’s coldest regions — we no longer have that kind of time.

Game of Queens: The Women Who Made Sixteenth-Century Europe