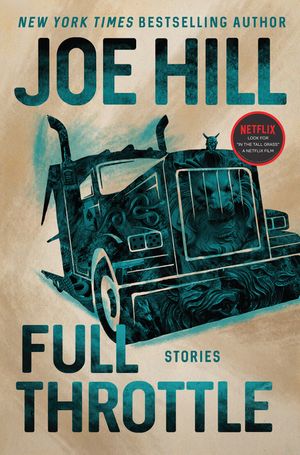 Joe Hill looks a lot like his father in the author photo on the book jacket of Full Throttle, his latest story collection. This is not a completely irrelevant way to start a review of this book, given that Hill is a horror writer whose dad happens to be the modern-day godfather of the genre, Stephen King.

In fact, Hill, who has a number of bestselling books under his own belt, leans into the family connection freely here — two of the stories are co-written with King, and the introduction is cheekily titled “Who’s Your Daddy?”

That introduction may be the best part of the book, paired with the story notes at the end. This takes nothing away from the mostly entertaining tales in between, but there is something in Hill’s exploration of his genetic predisposition for writing that makes the reader yearn for a full memoir. He is, after all, the product of two famous writers — his mother is novelist Tabitha King. While many introductions shed little light on the work they precede, Hill’s raucous and too-brief telling of his life story is required reading.

As for those stories, all but two of which have been previously published as far back as 2007, they are a mixed bag, as is almost always the case with retrospective collections like this. The two stories that he wrote with King, “Throttle” and “In the Tall Grass” (the latter of which has also become a Netflix movie), are among the weakest.

The first is either a powerful homage to or a pale imitation of “Duel,” the Richard Matheson story that became a Steven Spielberg movie, depending on how much you enjoy reading about a biker gang getting run down by a semi. The second employs a horrible example of a classic King gross-out moment without the usual strong characterizations that make such unpleasantries worth fighting through.

Similarly, the stories where Hill seems to be tailgating in his father’s lane are the least interesting. It is not particularly surprising for the merry-go-round steeds to come to life in a story called “Dark Carousel.” And while it is of historical interest to read a story from 2010 composed entirely of tweets — a story that opens with Twitter’s own explanation of what Twitter is — it is of significantly less intrigue to figure out how “Twittering from the Circus of the Dead” is going to end for those poor souls watching said circus from the bleachers.

Where this collection goes right, in some cases thrillingly so, are the stories where Hill diverges from the classic horror tropes by slyly subverting them, or when he writes in a different genre altogether. “Late Returns” is a ghost story set in a bookmobile that is also a deeply moving meditation on death.

In “All I Care About Is You,” Hill goes sci-fi, taking robots straight out of Asimov and placing them in a dystopian landscape for an affecting coming-of-age story about a teenage girl hiring an automaton to make her birthday wishes come true.

In the story “Faun,” he reimagines Narnia as if it had been discovered by opportunistic and violent adults rather than innocent, idealistic children. And in a tale that highlights Hill’s humor, “Wolverton Station,” a man finds himself on a train with a pack of uniquely British werewolves that could easily be the same ones Warren Zevon used to sing about.

All in all, Full Throttle is an enjoyable romp through the vivid imagination of an accomplished literary heir to the throne. But while the stories are worth reading, here’s hoping Hill will someday write that memoir.

Michael Landweber is author of the novels We and Thursday, 1:17 p.m. His short stories have appeared in a variety of places, including Gargoyle, Fourteen Hills, Fugue, American Literary Review, Barrelhouse, and Ardor. He is an associate editor at the Potomac Review.

And So Is the Bus: Jerusalem Stories