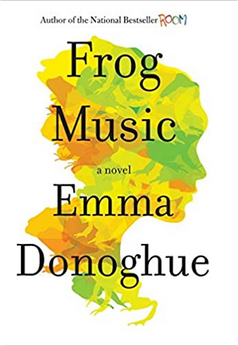 Irish author Emma Donoghue is an audacious, daring writer. Readers of her just prior novel, Room (short-listed for the Man Booker Prize), recall the successful creation of a fictional universe within the confines of one windowless room. She made her task even more difficult by selecting a 5-year-old boy, captive in the room, as narrator. Now, in Frog Music, her eighth novel and one inspired by an actual 19th-century murder, Donoghue takes on the radically different challenge of creating an entire city and culture: the street life, lowlife, and nightlife of San Francisco in 1876. She passes her new test with Dickensian aplomb.

“Oddity rings my bell,” Donoghue has said. Jenny Bonnet, who the author first encountered in an anthology about eccentric Victorian-era women, fits that bill. Bonnet made her living as a frog catcher for San Francisco restaurants, and was frequently arrested and jailed for the crime of dressing in men’s clothing. One night in 1876, someone, peeping through the window, shot and killed Bonnet as she prepared for bed. Intrigued, Donoghue researched the unsolved crime, generated her own hypothesis, and wrote this novel.

The author holds a Ph.D. in 18th-century literature and told the Economist that “like any writer of historical fiction, I go by the principle of digging up one hundred times more than I will actually use on the page.” For 15 years, Donoghue plumbed primary source material, including newspaper articles, city records, the federal census, and ships’ passenger lists. Frog Music distills and bears witness to her encyclopedic knowledge of the original story, its setting, and the culture of the era. The major events and all but five of the characters are drawn from primary sources, but she connects the factual data-point dots into an original narrative arc, pulling up the window shade to reveal the imagined backstory leading to Jenny Bonnet’s murder in that long-ago bedroom. Intentionally, as she told the Economist, Donoghue avoids “the True Crime genre,” and seeks to design novels which work on “several levels simultaneously.” Frog Music succeeds as historical fiction, mystery, and realistic psychological drama.

The archival data of this old, cold case is revisited from the point of view of Jenny’s acquaintance Blanche Beune. Twelve years earlier, then 15-year-old Blanche visited a carnival and ran away with the trapeze artist, Arthur, now her common-law husband. She has become a “soiled dove,” in the parlance of the day (one of the delights of this book is Donoghue’s use of vernacular idioms and slang) and a minor celebrity in the seamy underworld of San Francisco nightlife. Blanche earns top dollar for her performances at the Hall of Mirrors, and then rents herself by the hour after the shows to support Arthur and his constant companion, Ernest, and to pay the foster care fees for her 1-year-old son, placed at birth in a “baby farm” she has never seen.

The novel opens with Jenny’s murder and proceeds through flashbacks, narrated in present tense. The story of Blanche’s life and the events leading up to the crime unfold and evolve through these repeated flashbacks to critical scenes. She looks back again and again, re-examining and re-interpreting what she remembers in the light of additional information; her understanding sharpens and deepens.

The multiple, repetitive flashbacks create an illusion for the reader, reminiscent of the apparently three-dimensional images generated by the 19th-century parlor toy called a stereopticon. The device combined multiple similar photographic images of city scenes into layered composites; the person holding the device and peering through the view-finder almost believes she can step into the picture. So, too, the reader enters Blanche’s 1876 San Francisco to see, smell, and hear the teeming city in the grip of a heat wave, smallpox epidemic, and Chinatown riots. Music – popular songs and dance hall tunes – creates an almost audible soundtrack for the aptly titled novel. Donoghue provides detailed commentary on the songs in her afterword, one illustrative example of how her thorough research serves not pedantic accuracy, but sensory-rich fiction.

Ultimately, enjoyably, Donoghue is more time-traveler than historian. “Nineteenth-century reporters often made up details to fill in the blanks in their research,” she says in the afterword. Donoghue herself reports in that tradition – using historical data, but only as raw material. She spins new threads to weave new fabric, and embroiders as needed to serve the dramatic and emotional accuracy of her story. Frog Music is in the best, old-fashioned sense a page-turner: a book you open and a world you fall into.

Cross-dressing Jenny Bonnet defied norms and conventions; Frog Music defies categorization. It crosses and transcends genres to simultaneously engage the reader as historical fiction, mystery, and, above all, as character-driven psychological narrative. The consequences of Blanche’s first accidental encounter with Jenny, their brief ensuing friendship, and the murder, require Blanche to see herself in a new light.

As she seeks to discover who killed Jenny, Blanche uncovers mysteries about herself including the nature of her relationship to her husband, her negligence as a mother, and her capacity for friendship and love. Donoghue permits Blanche to solve a whodunit in 1876, but the timeless mysteries of complex human relationships remain.

Ellen Prentiss Campbell’s fiction and essays have appeared in journals including the Massachusetts Review, Potomac Review, and the Fiction Writer’s Review. A psychotherapist, she holds an MFA from Bennington College and is at work on a novel.