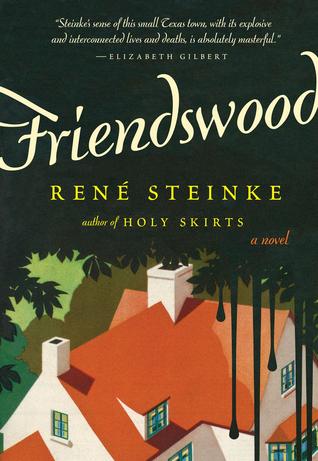 Most people there think one of those secrets — the presence of toxic chemicals generated by a long-dead business — is buried deep where it can do no harm. But Lee Knowles believes those chemicals killed her daughter and are killing other people in Friendswood, and she is fighting a lonely battle to rouse the community and the authorities to action.

Fifteen-year-old Willa is drugged and raped at a party attended by some of the town’s high school football stars. She doesn’t know exactly what happened, and it seems nobody else in town wants to know, not even her parents.

Dex, a teenage boy who likes Willa, finds his life haunted by the aftermath of a crime he did not commit. Hal, a former star football player, is facing middle age as a mediocre real estate agent, struggling to stay sober and trying to find a moral compass.

In Friendswood, author René Steinke binds these stories together in a tautening narrative until a final explosion alters all the protagonists’ lives. The story is told from all four distinct points of view, with Steinke credibly inhabiting each character.

Her writing is sometimes sensual, as when Lee and her husband make love at night in a fig orchard: “The open mouths of crushed figs pressed against the backs of her thighs, and she wanted to give herself over to the humidity and green. It was an odd lust, spreading into her fingertips, the fig trees in their rows; the moon; the dark, fecund air; the moist dirt; the ocean twenty miles away.”

She also evokes the dreariness of some stretches of Gulf Coast Texas: “This was the time of night when drunks rammed their cars into telephone poles, when guys ended up thrown out on the side of the road, vomiting, or got lost somewhere out in Pasadena where you could get drugs in baggies at the closed-down and abandoned drive-in.”

Steinke captures with just a few words the emotional drive in her characters. Early in the book, Hal tapes to his dashboard a Bible verse: “Beloved, I pray that you may prosper in all things.” He uses the word “prosperity” as a mantra and as a desperate prayer, only to be disillusioned later: “He looked at the pale sky, the smell of car exhaust everywhere, the rectangular grays of the Houston skyline in the distance. He’d reached the end, and God wasn’t there.”

Steinke writes of Lee reflecting that she’d been told she had a problem with anger: “But what the hell was she supposed to do with it? Tame it and put a bow on it and trot it out like a pet?”

Friendswood is Steinke’s third novel. Her second, Holy Skirts, was a finalist for the National Book Award. She is director of the MFA program in creative writing at Fairleigh Dickinson University in New Jersey. Until 2007, she was editor-in-chief of the Literary Review, where she now holds the position editor-at-large.

There is a real Friendswood, Texas, a Houston-area city of about 38,000 founded by Quakers. Its website notes that the town has been named as a Best Place to Live by Money magazine, and as one of the Best Towns for Families by Family Circle.While this novel is compassionate and haunting, it is unlikely the real Friendswood’s real estate agents will be handing out free copies.

Susan Storer Clark is a former broadcast journalist who wrote and reported for the Voice of America and WRC-TV. She has completed her first novel, The Monk Woman’s Daughter, set in the brawling slums of 19th-century America, and is at work on her second novel, about an African woman taken as a prize by Francis Drake on his voyage around the world in 1577-78. Her second novel actually relates to the study area of her advanced degree from King’s College London, where she studied 16th-century English history. She and her husband, Rich, recently moved to the Seattle area, where they are renovating an old farmhouse, and where Susan is singing with the Seattle Labor Chorus and finally learning to play the guitar properly.