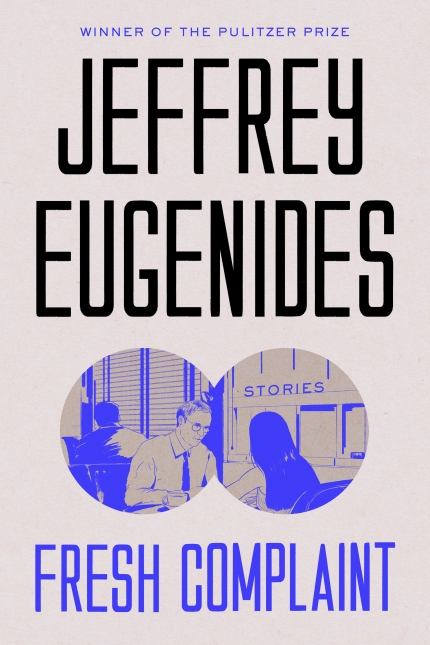 Jeffrey Eugenides has put together a masterful collection of short stories written over a period of three decades, some of them well before and some well after the publication of his Pulitzer Prize-winning novel, Middlesex, in 2002.

There’s little to remind us of Middlesex in Fresh Complaint, though. Only one relatively brief story, “Oracular Vulva,” delves into gender identity; as its title suggests, the story is mostly parodic. The ascent and fall of sexologist Dr. Peter Luce (“world’s leading authority on human intersexuality”) is fun to read but not, I think, intended to be taken very seriously.

No topical theme unites the other stories. An Indian girl uses sex to avoid an arranged marriage. A father converts a motel into timeshare units. A man starves himself into hallucinogenic fevers. Artichokes play a leading role in a four-way love contest. It’s rich stuff, full of tight dialogue and clever twists, easygoing and nearly always enjoyable to read.

Perhaps the most memorable character in the collection is an attractive Indian-American girl awkwardly named Prakrti. Pulled in two directions by her contemporary American upbringing and her parents’ strict adherence to traditional Indian customs, she seeks a relationship (of what sort we do not know) with an American professor who is giving a lecture at the college she’s attending in Delaware.

“I’m only a freshperson,” she tells him, with characteristic playfulness. As the freshperson student and the responsible professor meet and spar — with the girl leading the way — the scene clicks nicely and we look forward to more.

Also excellent is the tale of Prakrti’s trip to Calcutta with her family to celebrate Diwali in full tradition with flowers, beeswax candles, and palm fronds. Her mother, expectedly, has secretly arranged things so that Prakrti will meet — but not talk with — the boy she and her husband are planning for Prakrti to marry.

Prakrti’s cruel connivance for getting out of this dilemma comes with an unexpected twist, but the story is undermined by awkward time jumps — or what appear to be time jumps — and some geographical confusion, as well. These slow things down. But Prakrti remains a compelling and memorable character.

My favorite of these stories is “Capricious Gardens,” a sexy Chekhovian comedy of errors in which each person’s desires and actions clash so persistently with the others’ that no one is able to get what he or she wants. We’re in Ireland, at the country house of 43-year-old Sean. Sean has picked up two American girls, Amy and Maria, walking along the road on his way home after a trip to Italy. Amy is beautiful. Maria is not. He promises them their own room in his house. They agree. At the house, we meet Sean’s mumblingly unpredictable friend Malcolm.

The four of them contemplate an evening without dinner because there’s nothing in the fridge except butter. However, searching through an overgrown and unkempt garden, they discover a bed of artichokes that proves to be the evening’s salvation. The harvesting, stacking, and preparation of the vegetables begin.

Amy stretches sinuously at the kitchen counter, awakening Sean’s lust, which he expresses by promising to show her a relic of St. Augustine’s finger which he has hidden away. Maria is in love with Amy and sticks stubbornly to her side. Malcolm has recently contemplated suicide but is entranced by the “youth and vitality” in the house and looks forward to a meal he sees as “miraculous.”

Amy has a yen for Sean, but he can’t be sure of that. Sean sends Maria upstairs. Malcolm stumbles in and sets up his own relationship with Amy. He pulls her outside to help him with the artichoke harvest. He has Amy make a basket with her arms:

“On his knees before her Malcolm began picking up the artichokes, placing them one by one in her arms, gently pressing them against her stomach...she stood before him, slender and young, with a profusion of artichokes sprouting from her belly. He placed one last artichoke high up on her chest, accidently pricking her. ‘Oh sorry!’”

This tale works remarkably well because it is pervaded by a fine sexual tension mixed with utterly irresistible humor.

Another story illustrates Eugenides’ skill with urbane playfulness. “Baster” centers on a 40-year-old woman’s insemination party. Before getting any older, she has decided to inseminate herself with semen from a well-built friend using a turkey baster. She has recently ovulated. The semen has been collected. The party is in full swing. The woman’s former lover appears, and the story proceeds from there with the author’s characteristic cosmopolitan sense of fun. The denouement stretches credulity a bit, but it works.

Eugenides seems most comfortable when he can write his stories with irony and a detached, sophisticated humor. He is thoroughly cosmopolitan, and he can be very funny. This style is on full and effective display in “Capricious Gardens,” but several of the other stories are deliberately dark, their characters devoid of hope or humor.

Rodney, for example, in “Early Music,” is a rather pathetic victim of chronic indebtedness. The two men who set out to defraud their boss in “Great Experiment” are dour and doomed to fail. And Mitchell, in “Air Mail,” ravaged by diarrhea, starves himself into hallucinogenic non-existence. These stories don’t let Eugenides get into his most effective groove.