A witty (and somewhat soulless) postmodernist comedy of arch understatement. 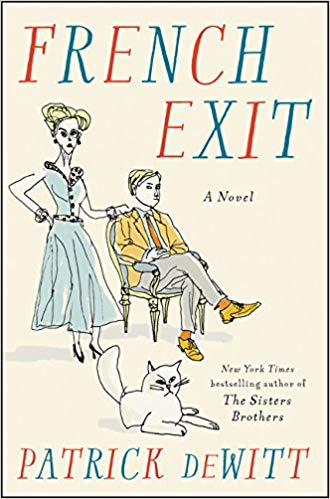 The story centers on the climactic adventures of wealthy socialite Frances Price, widow of courtroom shark Franklin Price. She’s also the roommate-mother of grown son Malcolm, who figures in this absurdist fable both as indispensable foil to Frances and, as the novel unfolds, blundering romantic hero.

In the glittering canton of Manhattan, the aging but still passably lovely Frances owes much of her neighborhood celebrity to the circumstances surrounding her sudden widowhood some 20 years before. It was she, it turns out, who had discovered husband Franklin, dead of a massive heart attack, in their foyer. Not lingering to inform anyone in officialdom, Frances locks up and decamps for a long weekend in Vail.

In the years since, Frances has blithely spent Franklin’s massive fortune without regard to its preservation. As the novel opens, the money is nearly gone. The narrator supplies what sounds like set-up notes in a screenplay:

“She was a moneyed, striking woman of sixty-five years, easing her hands into black calfskin gloves on the steps of a brownstone in New York City’s Upper East Side…It was late autumn, dusk; the windows of the brownstone were lit, a piano sounded on the air — a tasteful party was occurring.”

This detachment, as self-consciously wry as a Mayfair dinner anecdote, dominates the narrative. How the novel appeals to the individual reader may hinge on his or her appreciation or tolerance for this unremitting tone.

The reader who opts to continue on this adventure through its Parisian dénouement will encounter a brace of quirky characters: Malcolm’s phlegmatic sometime-fiancée, Susan; a French private detective hired to find Frances’ absconding cat; a shipboard fortune-teller who half-heartedly takes Malcolm into her bed and may or may not have real psychic powers; a matching set of ladies of a certain age — one the New York underwriter of Frances’ overseas retreat, the other an emigrée socialite manqué (who may or may not be a con artist); and Frances’ cat, Small Frank, who may or may not be hosting the spirit of her dead husband.

As you might have divined from this burgeoning troop of zanies and the lingering aroma of imposture and/or confusion, French Exit is also fueled by the author’s allusive affection — or perhaps ironically signaled distaste — for bygone comic models.

The story is set in a vaguely telegraphed throwback world, a kind of Cloud Cuckoo Land brimming with the staples of traditional romantic comedy and its midcentury Hollywood offspring.

Here, grand ocean liners ply the Atlantic, loaded with dress-for-dinner sojourners contending for their moment at the captain’s table. And here also the comic principals, beset by crisis, characteristically flee to a locale set well apart from day-to-day life. In French Exit, it’s romantic Paris rather than the Forest of Arden or a mainline Philadelphia estate or a Connecticut pre-suburb prowled by escaping leopards.

Not so remarkably, all the other quirky or ill-intentioned principals crowd into these archetypal Arcadias, as well, driven by pursuit or coincidence, that two-stroke engine of comedy. And here, conventionally, all troubles get worked out: The boy fated for the girl may lose her momentarily, but then he gets her back, and all obstructing agents — including his love rival — are converted or, one way or another, vanquished.

This is the long tradition to which French Exit faithfully adheres, albeit with ironic detachment. Obtuse, socially inept scion Malcolm is Bertie Wooster writ small. And the novel just hums with faint echoes of other familiar voices: Oscar Wilde, Evelyn Waugh, Noel Coward.

Book clubs and Portland/Brooklyn hipsters alike may warm to this absurdist and faintly condescending novel for its many charms. Ultimately, though, it comes across as a spinning top of paper-thin absurdity and warmed-over comic conventions; of reversals of expectation slipped through with wry nonchalance; of satire bled dry of bite; and of death drained of impact.

Children of God: A Novel

Putting a new spin on some of the world’s oldest stories.

Madonna in a Fur Coat