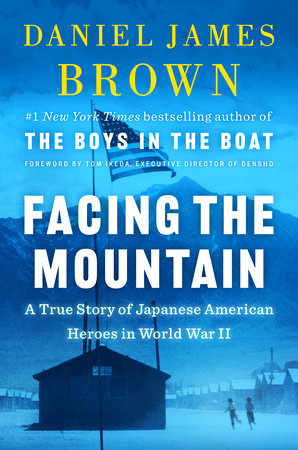 Daniel James Brown, author of The Boys in the Boat, has written another bestseller with Facing the Mountain, which chronicles the Japanese American experience during World War II. By studying oral histories collected by the Seattle-based Densho organization and conducting extensive interviews with families who lived through those years, the author has crafted an engrossing work that allows readers to become companions of the featured individuals as their stories unfold.

The book weaves together four main topics: a brief history of our convoluted, nativist immigration laws; the forced relocation of over 120,000 West Coast Japanese American families into “concentration camps” shortly after Pearl Harbor; the recruitment from those camps of second-generation “Nisei” to form the all-Japanese 442nd Infantry Regimental Combat Team of the Fifth Army; and the story of Gordon Hirabayashi, a Nisei Quaker who challenged the constitutionality of Japanese internment and conscription.

Our immigration and naturalization laws have long favored whites from Northern Europe. These laws were bigoted and anti-Asian well into the 20th century, culminating in the Immigration Act of 1924. Based upon the faux science of eugenics, it endorsed xenophobia, isolationism, anti-Semitism, jealousy, and raging hate. It decreed harsh quotas and/or blanket exclusions aimed at Italians, Poles, Jews, and most yellow and brown people.

The author starts the book by offering a taste of the vibrant prewar Japanese American culture and life on the mainland and in Hawaii. We meet Japanese American families living as ordinary people, working, loving, achieving, and sometimes failing as they try to secure a foothold in their adopted country.

Suddenly, on December 7, 1941, their world was turned upside down. We share the indignity of their roundup at gunpoint and imprisonment behind barbed wire in camps with armed guards in towers. Most abruptly lost their homes, farms, businesses, and dreams. Unlike their Japanese-born (“Issei”) parents, the Nisei were birthright citizens. Yet they, too, were subjected to forced internment and the loss of their constitutional rights. All court challenges were denied.

As WWII proceeded on two fronts, American casualties grew. By 1943, the Army desperately needed additional soldiers. In response, the law prohibiting Japanese American enlistment was changed. Nisei men could now enlist or be conscripted, although Issei were still excluded.

Surprisingly, many Nisei stepped forward despite their families’ continued internment and deprivation. Reluctantly, fathers bid their sons goodbye but requested that their boys follow the Japanese code of giri (social obligation) and gaman (endurance) if they must serve. They were urged by their elders to “bring no shame to the family.”

Most of the young Japanese soldiers were assigned to a segregated unit that became the 442nd. Its motto was GO FOR BROKE, and that its members did. This unit fought several hellish if not suicidal missions, particularly in Italy and in the Vosges mountains in France. By war’s end, it had become the most decorated fighting unit for its size and length of service in the history of the U.S. military.

The 442nd’s fighting in Italy and France involved uphill assaults that resulted in astronomical casualties. Its worst battle was in the Vosges along the German border; the unit sustained multiple casualties just getting to the mountains. Though seriously reduced and weakened once it arrived, the 442nd was immediately ordered to make a frontal assault up a well-defended mountain to save the “Lost Battalion.”

This knee-jerk order came from General John E. Dahlquist, who had foolishly allowed the 1st Battalion to become surrounded. The 442nd’s unit commander confronted Dahlquist on the battlefield and refused the order because of the dreadful condition of his few remaining men and the enormous odds against them. After the general stormed off, however, the 442nd decided yet again to live its motto. The soldiers began to climb. They fought and were wounded, and many died, but they ultimately beat back the Germans. The author provides an extraordinary account of the inch-by-inch fighting.

Soon after, Germany surrendered and the war in Europe was over. The proud members of the 442nd left the military as highly decorated soldiers. And while they may rightfully have expected warm applause and gratitude at home, they arrived to something far different: Nothing had changed. Even in their bemedaled dress uniforms, the Nisei were treated to ugly taunts and were denied services. Their hostile reception was akin to that experienced by returning Black soldiers.

The plight of Nisei conscientious objector Gordon Hirabayashi lends further sheen to the story. He refused internment and conscription because they violated his constitutional rights as an American citizen. Although found guilty of the “crime” of refusal, he continued to pursue his case. His firm belief in the U.S. Constitution was finally shattered when the Supreme Court ruled against him. He spent much of the war in jail.

After the war, Hirabayashi earned a Ph.D. in sociology and enjoyed a successful academic life. But he and others continued to work his case. New evidence of prosecutorial fraud was eventually uncovered, and, in 1987, the Ninth Circuit Court of Appeals overturned his criminal conviction. Hirabayashi passed away in January 2012; in May of that year, Barack Obama awarded him the Presidential Medal of Freedom, this country’s highest civilian honor, posthumously.

Facing the Mountain is a splendid book. Daniel James Brown’s writing is compelling, and his depictions of battle scenes are frighteningly authentic. By capturing the personalities and emotions of the people who lived through this part of WWII, he has illuminated some of the best and worst moments of our nation’s history and has also inspired hope that we can do better.

Paul D. Pearlstein is a retired attorney who is still amazed at the extreme swings of our legislative pendulum.