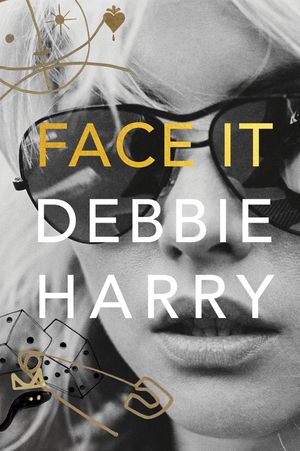 Debbie Harry isn’t just another pretty face. Intelligent, bold, and driven, she’s thriving in the 75th year of a fascinating life full of professional triumph, all while riding a rollercoaster of a personal journey most of us ordinary earthlings can only dream about. Now we can read about it in her aptly titled memoir, Face It.

Whether as the front person and voice of the band Blondie, or in her forays into cinema and other arts, Harry’s enigmatic beauty and aura — part vamp, part vulnerable — came naturally, but she knew how to work it, too.

“I was playing up the idea of being a very feminine woman while fronting a male rock band in a highly macho game,” she writes. “My Blondie character was an inflatable doll but with a dark, provocative aggressive side...I was playing it up, yet I was very serious.”

If this memoir had an index, it would boast a who’s who of the New York arts scene, starting in the late 1970s with Andy Warhol, William S. Burroughs, John Waters, Jean-Michel Basquiat, the Ramones, Joan Jett, and the Talking Heads, among others. Those hoping for a Hollywood Babylon tale of unbridled sex, drugs, and rock ‘n’ roll might be disappointed by Harry’s mostly serious, introspective tone, however.

There are a few wild and crazy stories, but Harry is more participant and observer than lurid storyteller in these pages. For example, she skirts around deep discussions of how her relationship with longtime partner Chris Stein ended. Likewise, she doesn’t devote much attention to the inner workings of Blondie that resulted in a fair amount of personnel turnover.

Former members of the band verbally ambushed Harry and Stein at the band’s induction into the Rock & Roll Hall of Fame in 2006, yelling from the audience that they should be allowed to perform on stage with the latest incarnation to celebrate the occasion. Harry gives it a few pages, yet readers might be left feeling they aren’t getting the whole story.

The book becomes more reflective and conversational toward the end. She devotes space to detailing her morning routines, such as drinking coffee and taking the dog for a walk. Stein and Harry reformed Blondie years ago, and they’re still touring, albeit with a lot less drama.

Appreciating the relative calm of Blondie’s 2019 touring life when compared to the band’s heyday, Harry allows that it’s now, “Punch in, punch out...routines can be double-edged swords that way. And, of course, the craziness can be a whole lot more fun in memory than when it was happening for real.”

Clearly, she wasn’t going for a VH1 “Behind the Music” vibe in her memoir.

Still, Harry is candid about many of her own insecurities — much of it grounded in being an orphan living with a constant fear of abandonment. Open about having plastic surgery, she writes, “I think it’s the same as having a flu shot basically, another way of looking after yourself.” She’s also forthcoming and illuminating when discussing her past heroin addiction and bankruptcy issues.

The book appears to have sprung out of a series of interviews with rock journalist Sylvie Simmons, and the limits of oral discourse show from time to time. As a reader, at several points, I wished I could stop Harry in mid-conversation with a question or clarification. And the book would benefit from a few well-chosen footnotes, too.

But if a memoir’s goal is to give you a true sense of the subject, Face It is a success. Harry’s contradictory and fascinating personality come through clearly. It’s a cliché to fall back on the Marilyn Monroe model, but the screen queen is an obsession of Harry’s, and it’s not a stretch to draw comparisons between two beautiful women sometimes undervalued for their smarts because of their sex appeal.

Luckily for Harry, she grew up in a world that, while obviously flawed when it comes to equal treatment for women, at least offered a few avenues to opportunity and respect. Debbie Harry was tough enough, talented enough, and smart enough to drive them with relish. And now she’s written a pretty good memoir, too.

Michael Causey is the host of Get Up!, which can be heard every Monday at 8 a.m. on WOWD 94.3 FM or at takomaradio.org. And no matter what anyone says, he defends Harry’s rapping in “Rapture” as a beautiful product of its time.

Love “The Tide Is High”? Click here to support the nonprofit Independent!

The Drinkable Globe: The Indispensable Guide to the Wide World of Booze