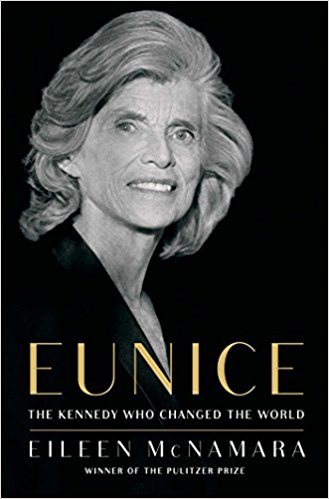 Eunice Kennedy Shriver longed to be Daddy’s little girl. “You are advising everyone else in that house on their careers, so why not me?” she wrote to her father. Joseph P. Kennedy did not ignore his daughter, but he directed his fiercest attention to his sons, determined to invest his millions in making one of them the first Irish Catholic president of the U.S. He accomplished his life goal in 1961 with the inauguration of John F. Kennedy.

Still, “puny Eunie,” as her brothers called their gawky, skinny, sickly, big-toothed sister, refused to be ignored, and with determination and persistence, she finally forced her father’s admiration: “If that girl had been born with balls, she would have been a hell of a politician.”

Some might dispute any such lack as Eunice Kennedy Shriver barged into a man’s world and grabbed her rightful place alongside them, although she sometimes — but not always — considered them to be her betters.

She founded the Special Olympics, which spread to 50 countries, and because of her, those with physical and intellectual disabilities are no longer locked away. Society now educates them, employs them, and helps them thrive.

Eunice used her father’s vast connections and immense fortune to her best advantage. (She got admitted to Stanford because Joe Kennedy asked his friend Herbert Hoover to make it possible.) Through her father, she landed a job in the Justice Department as a special assistant to U.S. Attorney General Tom C. Clark. “Joe Kennedy had secured Eunice’s job the same way he had engineered a U.S. House seat for Jack,” McNamara writes, “with good connections and cold cash.”

During that time, Eunice and her brother Jack lived together in Georgetown, where they had an Irish cook and numerous friends, including Senator Joseph McCarthy and Congressman Richard M. Nixon of California. In her unpaid position, she developed interest and expertise in juvenile delinquency and appealed to her father for help in setting up a scholarship program.

Joe responded that the Joseph P. Kennedy, Jr. Foundation, established to honor his firstborn, killed in WWII, “would be glad to defray any expenses…in Boston.” Perceptively, McNamara notes “the random nature and mixed motives of the Kennedy Foundation’s early philanthropy. Solving social problems did not preclude advancing his children’s careers.”

Within a few years, Eunice commandeered the foundation and directed its resources into the field of mental retardation, perhaps in expiation for the plight of her sister Rosemary, the family’s special-needs child.

Recognizing Rosemary’s severe disabilities in London, when he was serving as U.S. ambassador, Joe Kennedy decided his daughter should undergo the experimental psychosurgery of a prefrontal lobotomy, which went horribly wrong, rendering Rosemary unable to function on her own.

Afraid that the stigma of mental retardation might affect the political ambitions he had for his sons, Kennedy sent Rosemary to be cared for by the Sisters of St. Francis of Assisi at St. Coletta School for Exceptional Children in Jefferson, Wisconsin. Her absence was not mentioned by her parents or her siblings for 30 years, until Eunice began “reintegrating her sister into the family that abandoned her.”

Like her mother, Eunice Kennedy Shriver was a zealous Catholic who accepted all the tenets of her church, including the sanctity of marriage and the abomination of abortion. Yet she turned a blind eye to the marital infidelities of her father and her brothers.

In 1980, when Gloria Swanson published an autobiography and revealed her long affair with Joe Kennedy, who took the Hollywood actress on family vacations with his wife and children, Eunice took umbrage. She fired off a blistering letter to the editor of the Washington Post, which McNamara does not mention. Extolling her mother as “a saint” and her father as “a great man,” Shriver lambasted Swanson’s revelation as “warmed-over, 50 year old gossip that accuses the dead [my father] and insults the living [my mother]…The closeness [my father] shared with my mother and her obvious devotion to him inspired his children to revere the values of home and family as well as public service and dedication to others.”

By that time, the sexual romping of the Kennedy men — father and sons — had become proven fact. The only marriage of Rose and Joe Kennedy’s nine children which still seemed intact was that of their fifth child, who adored the Blessed Virgin Mary and wanted to become a nun before she was persuaded, after a seven-year courtship, to marry R. Sargent Shriver.

That 1953 wedding was as grand as a coronation, with Francis Cardinal Spellman celebrating the nuptial Mass at St. Patrick’s Cathedral on Fifth Avenue in Manhattan, assisted by three bishops, four monsignors, and nine priests. The 32-year-old bride wore a white Christian Dior gown made in Paris, and 1,700 guests danced to a 15-piece orchestra on the Starlight Roof of the Waldorf Astoria.

But the wedding might not have occurred without the intervention of Theodore Hesburgh, the charismatic young priest from the University of Notre Dame who was prevailed upon by Joe Kennedy to persuade Eunice not to enter the convent, which Joe felt would be detrimental to JFK’s political career.

Because of Father Hesburgh’s high esteem for Sargent Shriver, he agreed to be Joe Kennedy’s heat-seeking missile, summoning Eunice for “a frank and honest exchange.” He told her that her vocation was not the convent but to marry Shriver, have his children, and continue the work she was doing with the mentally challenged.

He later told McNamara that Sarge “was the best, the very best of the bunch. I knew her not as well as I knew him, but she was a great gal. There are a lot of Kennedys. They come in all shapes and sizes. But who did the work she did? Who cared for Rosemary as she did? It took a lot of strength, I will tell you that. The men tend to outrank the women in that family, but she had as much or more to offer as any of them."

Eileen McNamara writes with grace, elegance, and diplomacy, never making moral judgments on harsh facts. If she were not doing laudable work as chair of the journalism program at Brandeis University, the Pulitzer Prize-winning writer would make an excellent secretary of state. Her fine biography of Eunice Kennedy Shriver champions the overlooked sister, who deserves as much, if not more, applause than her celebrated brothers in establishing the family’s monumental legacy.

Kitty Kelley is the author of several number-one New York Times bestsellers, including Nancy Reagan; The Family: The Real Story Behind the Bush Dynasty; and Jackie Oh!, the first book to reveal that Rosemary Kennedy survived a mangled lobotomy her father had ordered in hopes of reversing her mental retardation. Kelley is a recipient of the Washington Independent Review of Books’ Lifetime Achievement Award.