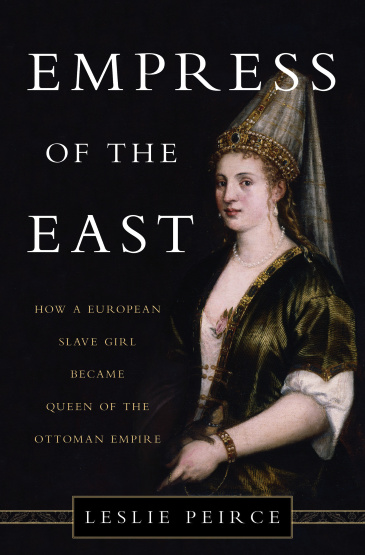 A bestselling writer of historical romance would be hard-pressed to invent a heart-thumping saga as compelling as this real-life biography of Roxelana, the Russian slave who emerged from the imperial harem of Sultan Suleyman I to become his devoted wife and trusted advisor for life.

Author Leslie Peirce is a prominent authority on gender and rulership in early modern Turkey, and this biography of a 16th-century Ottoman sultana (c. 1502-1558) demonstrates why. In Empress of the East, Peirce builds an evocative narrative around this enslaved Russian teenager who was captured and sold into the young sultan’s harem.

Complicating Peirce’s task are the relatively scant contemporaneous mentions of Roxelana, particularly before the mid-1530s; apparently, it was considered bad form among the Turks to utter hasty opinions about any of the royal women associated with the sultan’s domestic realm.

Before Roxelana, the longstanding rule in the royal harem was to retire a pregnant concubine to a comfortable private life outside the harem. After giving birth, she would never again return to sexual servitude, but was expected to devote herself to raising the child with his or her future political prominence in view. For a son, this meant preparing him for the frequently bloody struggle with his half-siblings to succeed their father as ruler.

But as Peirce tells the tale, a stunning development in our Russian concubine’s story soon turns customary harem practice on its head. Once pregnant, Roxelana does indeed retire from the sultan’s bed, but only temporarily. After her son is born, she goes on to bear Suleyman five more children — four sons and a daughter — and ultimately marries the Ottoman ruler.

Suleyman himself, when he’s not cantering off for extended military campaigns, settles into domestic life with his nuclear family, an unprecedented arrangement for an Ottoman sovereign. And Roxelana becomes a public figure, effectively the queen of an empire stretching thousands of miles east and southwest from its capital in Istanbul. To the north, with Suleyman or his grand vizier in command, Ottoman forces threaten the Holy Roman Empire itself.

Citing the Empress’ letters to her husband on campaign, among other sources, Peirce argues that Suleyman’s and Roxelana’s relationship was a devoted love match, although other voices —notably among European diplomats of the period and later Ottoman commentators — grumble darkly about female duplicity and even witchcraft.

And many modern historians, even as they laugh off that pesky eye-of-newt suspicion, tend to view Roxelana as sexually manipulative and politically treacherous. (For instance, the eminent historian John Julius Norwich, in his recent Four Princes: Henry VIII, Francis I, Charles V, Suleiman the Magnificent, and the Obsessions that Forged Modern Europe, voices this judgment in his glancing references to Roxelana.)

As noted above, Peirce anchors her coverage of Roxelana’s teenage years in a detailed description of the imperial harem as, quite literally, the breeding ground for succession to the sultanate. And she fleshes out the royal couple’s remarkable domestic relationship and its political outcomes when she turns to the far-ranging philanthropic functions the royal woman of the sultanate — the queen mother, the queen herself, princesses, and the other mothers of the sultan’s sons — were historically expected to take on as civic responsibilities.

In her four decades at the seat of Ottoman power, Roxelana takes this charitable mission to new heights, endowing foundations, hospitals, and soup kitchens throughout the near reaches of the empire.

Author Peirce delves into Suleyman’s campaigns of conquest, as well as the provincial governorships his sons undertook to prove their administrative mettle in advance of the dynastic struggle to come. She also mines the contemporary dispatches of European diplomats, mostly French and Venetian, as they report back to their monarchs about goings-on at the Ottoman court. A persistent researcher, she even digs into palace account books — orders of supplies and materials for building, decorating, maintaining, and provisioning the imperial households of the sultanate.

But drawing on diplomatic dispatches is a dicey proposition; for one thing, they’re not always strictly accurate or even complete, and they often support, truthfully or otherwise, what the ambassador wants the folks back home to believe. So, too, with scanning account books, which can trigger unsupported assumptions by the researcher about their context and use.

But Peirce deals with her scattered source materials as she finds them, necessarily advancing assumptions here and there, to produce a skillfully and convincingly presented biography of a queen too little understood, and very possibly maligned, by ensuing generations of mostly male historians.

The Summer Friend: A Memoir

A heartfelt, guarded ode to a seasonal pal.