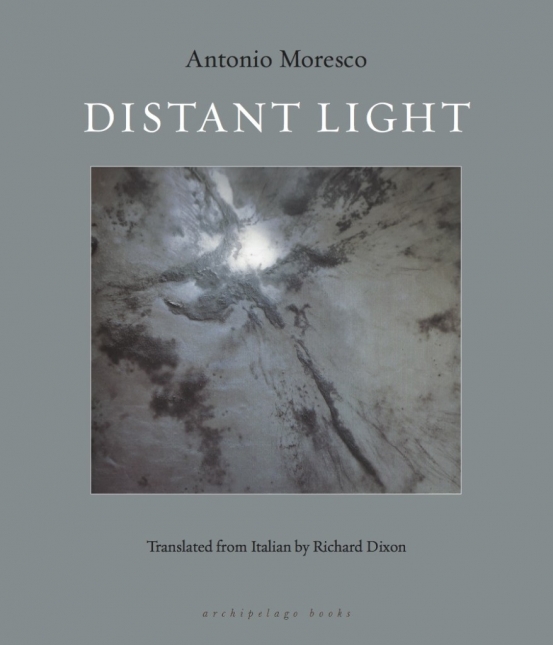 Every evening an unnamed man, the only inhabitant of an abandoned village, sits in front of his house on a metal chair. As the chair’s legs sink ever deeper into the dirt, darkness engulfs the world. “Only at night in the moonlight, can you really understand what the trees are, these columns of wood and froth that stretch out toward the empty space of the sky.”

The man seems to have a normal, if unusually located, life: He eats pasta, washes clothes, fixes the valve on his toilet, and has a charming encounter with a pair of badgers. But one night, as he stares into the dark across a gorge to the far ridge, a pinprick of light appears. Is someone there? What does it mean?

So begins Distant Light by the Italian author Antonio Moresco. It’s the first of his novels to be translated into English.

The man’s apparently idyllic existence is broken when he encounters a huge drooling Rottweiler deep in the forest. Frightened, his house half an hour away, he turns back. The dog follows, relentless and silent except for rasping breath. But when the man notices that the dog’s legs have been smashed, compassion joins his fear.

Although he reaches home safely, this incident darkens the man’s perception of his surroundings. Previously, his observations have been bucolic — “this immense dark and forgotten space full of avalanches of stars” — but now he begins to experience nature as an unfathomable, uncaring force with menacing swarms of birds and insects; even the surrounding plants have ferocious roots. After a tremendous earthquake, he imagines himself crushed by his house, “dying alone, in that sarcophagus of debris, far from everything, unseen, forgotten, unable to move…”

This novel, written in language that encourages the reader to slow down, is an anomaly in an age of fast-paced stories. Akin to Anais Nin’s sensual explorations in A Spy in the House of Love, Rilke’s The Notebooks of Malte Laurids Brigge, which limns depression, and Woolf’s attempts to capture the incandescence of existence, Moresco’s story delves into life and death, and the spaces that occur between the two.

Surprisingly, the man has an automobile. When he drives to a neighboring town to ask about the persistent light, the villagers laugh at the idea of someone living in such wilderness and send him to an Albanian who talks about extraterrestrials, telling a strange story about his goats and a pod of light.

The man remains unsatisfied, and every night after “the plant world becomes invisible and black like a great nocturnal sponge,” the light comes on. He must know what it means.

Finally he crosses the perilous ravine and discovers a bramble-covered path. Hesitating “at the unknown world he was about to enter,” he follows the trail to a little stone house owned by a boy who also lives alone, feeding himself, washing his own sheets, and doing homework for school. Now questions multiply. The boy’s schoolmates call him Putty and he says he’s failing. He also says that he’s dead. The state of death doesn’t seem to matter to either of them. The more the man learns about Putty — following him to his night school, talking to the janitor about the other dead children — the more the mystery deepens.

Unpublished until he was in his 40s, Moresco is now well known in Italy, principally for a mammoth trilogy, The Uncreated (Gli increati). One of his stories, “The Pigs” ("I Maiali"), is online, though Distant Light is his only novel available in English. The translator, Richard Dixon, has said that “Moresco’s language has a stark beauty and urgency...the original Italian is disarmingly simple, but that simplicity was perhaps what I found hardest to maintain.” Dixon succeeded well; his rendering avoids the awkwardness which can occur when concepts and rhythms are forced into a foreign vocabulary.

Distant Light is not a book that will appeal to everyone. It demands patience and attention, and the direction of the story isn’t always clear. Moresco’s magic is that he is able, through words, to bring the reader to the ineffable. Anyone willing to absorb the language will find many hints about what lies beneath the surface, and thus be prepared for the last chapter, when the tenor of the writing changes and the mystery is revealed.

The final unveiling is completely satisfying, even though it is likely that each reader will have a different, personal understanding of the events. Most will put down the book haunted by its beauty and full of lingering questions about the progression of life toward death and our place in the world around us.

Although Terri Lewis lives in Washington, DC, with her husband and two dogs, she loves visiting West Virginia for the mountains, the trees, the streams, and rivers. Not to forget the deer and the whistle pigs. She has just completed a novel and is searching for an agent.