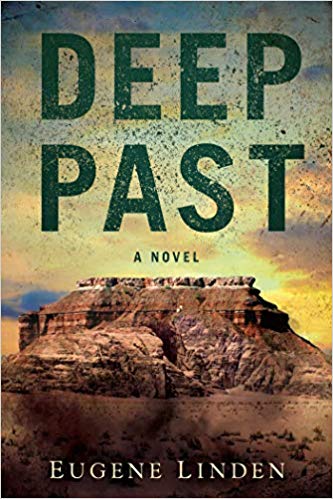 One of the most basic rules of writing fiction (and nonfiction, for that matter) is to show, not tell. It’s something that beginning writers struggle to learn and a paradigm which distinguishes good fiction from mediocre. Don’t tell readers, for example, that the heroine is afraid. Show them. Make it vivid. Make it so that we, as readers, begin to feel her fear.

It is on this basic level that Eugene Linden’s Deep Past fails. As a result, a novel with great potential — an interesting premise, a relatively good plot, and some very well-researched science — falls flat.

Deep Past is the story of Claire, an anthropologist whose specialization involves elephants and the evolution of intelligence. A discovery in the desolate steppes of Kazakhstan causes her to abandon the project she’s working on in the States to travel to an isolated region and begin a scientific investigation that is not officially sanctioned, that is threatened by corporate greed and political instability, and that is eventually compromised in order to preserve evidence of the discovery before nefarious forces step in.

The discovery — an array of ancient elephant bones (in a region where elephants have never been known to exist) arranged in such a way that implies intention and, therefore, a high level of intelligence — is in an area being surveyed for natural resources. Transteppe, the multinational conglomerate responsible for the survey, is not in the business of anthropology. However, one of its principals, an amateur anthropologist named Hayden, takes an interest in the find and provides both cover and funding.

Eventually, Transteppe is acquired in a hostile takeover by Andrei Bezanov, a Russian oligarch whose motives are profit and revenge against a Russian national named Sergei, whose own background is geology. Sergei not only lends assistance to Claire, he also falls in love with her. And, so, Claire and her discovery get caught up in international intrigue.

If you think much of this is formulaic, you’re right. In fact, much of the plot seems to have been mapped out in advance so that it becomes not only predictable but, in some cases, too easy. The pieces fall into place too readily, too often.

There is a lot at stake in this story. The problem, however, is that there’s never any sense of urgency, due, in part, to the “show, don’t tell” paradigm not being followed, as well as to the flatness of the characters and the garden-variety dialogue that dominates the novel:

And [Claire] had a good plan, though it only worked so long as the world was populated by honorable people who played by the rules.

Her train of thought was interrupted when her phone rang again. Her heart leaped when she saw it was Transteppe.

“Thank God! Is everything OK?”

Sergei laughed. “Sure, we now have a karaoke hour at five every night. You should hear Rob’s version of ‘Stayin’ Alive.’”

Seriously? This exchange adds nothing to the plot, doesn’t illuminate any aspect of character, and fails to indicate the urgency of the situation — that a renowned scientist critical of Claire’s work is about to arrive to inspect the discovery.

Linden is a well-known writer who has several nonfiction books to his name, and his essays have been published in places like the New York Times, Financial Times, Fortune, and Time. He is not an inexperienced author, though this is his first novel. In his defense, he clearly knows his science, which he has been writing about for most of his career.

But while the science in Deep Past seems pretty solid, at least to a layman, the premise of the novel — that ancient elephants could’ve developed a level of intelligence that not only enabled them to arrange bones, but also to imbue petrified yams with a message understandable to future pachyderms — is farfetched. In fact, this line of thought requires an imaginative leap that leaves the reader curious yet, ultimately, in disbelief.

Linden may be an important writer in the field of scientific journalism but, as far as fiction is concerned, he has not made the mark here.

Mike Maggio’s newest collection of short fiction, Letters from Inside: The Best of Mike Maggio, will be released by Vine Leaves Press in November 2019.