Dark Places of the Earth: The Voyage of the Slave Ship Antelope

An eye-opening account of a little-known (yet horrifying) episode in American history. 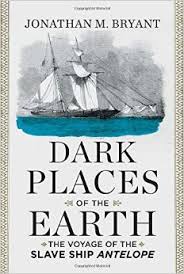 More than 200 Africans were herded together in Savannah, Georgia, on a July day in 1821 for a macabre event — horrid even by the standards of American slavery. As if marooned in a Shirley Jackson tale, the Africans were subjected to a lottery to decide their fate.

Sixteen of them, chosen at random, were to be freed and returned to Africa, while the others were to be relegated to slavery and divided between the Spanish and Portuguese traders who claimed them. This legally sanctioned spin of the wheel of fortune, which John Quincy Adams later condemned as a “gambling of human bones,” is just one of the devastating turns taken by historian Jonathan Bryant’s new epic, Dark Places of the Earth: The Voyage of the Slave Ship Antelope.

Few people today have ever heard of the Antelope, but during the 1820s, it was big news with major implications for the Atlantic slave trade and American slavery. The Antelope was a slaver’s brig out of Havana, the center of an expanding sugar economy built on African blood and toil. Although the United States banned the importation of enslaved Africans in 1808, the slave trade to Cuba thrived. More than 800,000 Africans were imported into Cuba in the 19th century, forever transforming the island’s society and culture.

Except the Antelope never made it back to Havana with its cargo. Instead, it was snared by a privateer who was hunting down Spanish ships on the African coast, and the Africans on board the Antelope suddenly found themselves mingled with the privateer’s other enslaved captives. After a series of mishaps, the Antelope (now renamed the General Ramirez) was seized by a U.S. revenue cutter off the coast of Florida in June 1820.

The voyage took a terrible toll, but one that was not atypical for such journeys. More than 70 of the 330 captives — one in five — who left the African coast aboard the vessel died during the middle passage. Federal authorities entrusted the survivors to the U.S. marshal in Savannah, John Morel.

The Africans’ ordeal had just begun, for now they embarked on a long and tortuous passage through the American legal system. Were they entitled to freedom? If not, who were their rightful owners? These questions so vexed the judiciary that it would take eight years and three trips to the Supreme Court to resolve them. Bryant, though, skillfully pilots the reader through the esoteric problems of admiralty and international law central to the case.

He also succeeds in making the key men in the legal drama come to life. If there is a hero in the story, it is Savannah lawyer Richard Wylly Habersham, who risked his standing in the white community by taking up the Africans’ cause. Too bad that Habersham was outnumbered by villains such as his courtroom rival, John Macpherson Berrien, who coolly dismantled the legal arguments for liberating the Africans, and Morel, who profited obscenely off the Africans he was supposed to look after.

In contrast to the lawyers and politicians who left behind copious records attesting to their stake in the case, the Antelope’s Africans lurk in the background of the story, in the dimness of its archives. Occasionally they flash into view, as in the grotesque scene of the lottery. Bryant almost miraculously uncovers a document from 1822 listing the names, sex, and ages of the 180 captives trapped in Savannah. One of them was named Atticus.

We catch sight of the slaves laboring on public works around Savannah, having children, and running away. Some learned English and became Christians. For too many, though, their long wait for justice was a death sentence. What these stranded souls thought of their strange sojourn in the “land of the free” can only be imagined.

The Antelope may never replace its more famous successor, the Amistad, in Americans’ historical memory of the Atlantic slave trade. There was no dramatic rebellion by the captives, and the complex legal issues of the case do not lend themselves to a Hollywood script. But in Dark Places of the Earth, Bryant has salvaged the history of an era when black lives mattered to slavers only as profit and the dead were thrown to the sharks.

Adam Rothman is an associate professor of history at Georgetown University. He specializes in the history of slavery, and is author of Slave Country: American Expansion and the Deep South and Beyond Freedom’s Reach: A Kidnapping in the Twilight of Slavery.