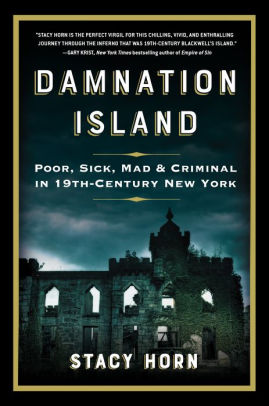 There’s no other way to put it: The subject matter of Stacy Horn’s newest book, Damnation Island: Poor, Sick, Mad & Criminal in 19th-Century New York, is chilling. The tale of New York politicians’, philanthropists’, and physicians’ attempts to address the city’s growing poverty and crime reads like something out of a horror novel, and it’s certainly a book you should consider if you’re a history buff.

Unfortunately, Horn’s writing style can be choppy and distracts from what should be a compelling narrative.

Blackwell’s Island, where the city of New York housed its poor, criminal, and insane during much of the 1800s, represents a dark and relatively unknown part of this country’s attempts to help — or shunt aside — its most damaged citizens. And it’s clear Horn has done extensive research that enriches her book immensely. Many of her chapters include minute details that a less-conscientious writer might have dismissed as unimportant.

Rather than simply describing the horrific conditions of the island, for instance, the author eloquently chronicles how someone might end up there:

“Referred to as the ‘poor men’s courts,’ the six police courts operated like conveyor belts of sorrow. One by one, people would step out of a pen and up to a rail in front of a raised platform...Because they couldn’t hear, many didn’t find out they’d been sentenced to prison until they were shoved into a police van and taken to the Twenty-Sixth Street Pier,” from whence they were transported to the island.

The book shines brightest when Horn writes about one person at a time. The chronicle of Sister Mary Stanislaus, the “lunatic nun,” grips the reader from beginning to end. The author tells the story of a woman who, by all accounts sane, ended up in one of the most infamous lunatic asylums in the country. Her plight is doubly insightful because it serves as a case study of what happened to untold women who were brought there.

After arriving on the island, women were supposed to be given “a warm bath and a change of clothes.” Instead, as Horn reports, “Bathing all the patients in the same bathwater became standard practice...The water would be reused and reused until it became more sludge than water, and women would have to step into water that was brown and oily, with floating bits of waste and vermin.”

Afterward, “Sister Mary would have been supplied with one thin blanket and put wherever there was a spare straw mattress, which was likely on the floor.”

It is when she veers away from the larger exposition that Horn falters. She vacillates between depressing vignettes concerning individual inmates’ fates — often ones who are never again alluded to — and accounts of the politicians, advocates, and doctors who failed the men and women of Blackwell’s so completely. While both of these storylines are interesting, they would best be relegated to separate chapters so as to avoid confusion.

The less plot-driven parts of the book also feel cobbled together. Horn combines different types of narratives seemingly at random: She intersperses chapters about specific people with ones about the island itself and still more about the atrocities that occur there. This may seem sensible, as the book is organized according to each section of the island, but instead it serves only to weaken each element.

Horn’s short epilogue is devoted to discussing what happened to Blackwell’s Island after it began to be abandoned in favor of other, theoretically more humane facilities. Here, too, it’s clear she has put immense effort into researching and explaining not only the city’s future endeavors, but also the country’s current state of affairs.

Her narrative runs up until the present day, providing the reader with invaluable insight into how such tales of history’s dark periods can inform our present and future decisions. As she notes: “The first step in getting it right is correctly identifying what is truly wrong.”