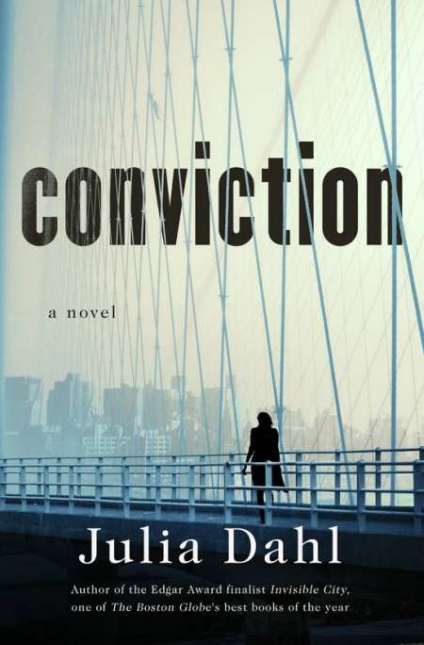 Conviction, the latest entry in Julia Dahl’s Rebekah Roberts series, is a powerful exploration of how unjustifiable convictions occur and what the consequences are. It also evokes the spiritual overtone of the title word. The storytelling mode is particularly effective, mixing sections told in the main character’s voice with other sections that enter the minds and emotions of other important characters.

It’s all about perspective.

Something horrible happens in Brooklyn during the summer of 1992. A black mother and father, along with one of their foster children, are murdered in their Crown Heights home. Another foster child is convicted of the crime, a false confession wrung from him via despicable police interrogation.

The narrative moves back and forth, alternating between two timelines. One describes the sequence of events as they happened in 1992. The other reveals events of 2014, especially those that follow journalist Rebekah Roberts, who is sparked into action by a letter from fortyish prison inmate DeShawn Perkins. He claims that he has been in jail for 22 years for a crime he didn’t commit.

To explore the background and consequences of this claim, Dahl designs a layered plotline that includes the relationships between the African-American and Jewish communities; the abusive and often criminal practices of city landlords; the unwillingness of police and district attorneys to reopen closed cases; the decline of U.S. newspapers; and the shoddy journalism that arises from the tension between getting the facts straight and being first to break the story.

And that’s not all. Conviction probes the texture and dynamics of parent-child relationships in a remarkably rich way. It’s not all good news. The relationship between Rebekah and her mother, Aviva, for instance, is very rocky.

Though the reasons for this would be clear to readers of Dahl’s first two novels — especially the second, Run You Down, where the women are developed in detail — first-timers might well be curious about what is largely left unexplained.

Aviva is extremely judgmental, and she disrespects her daughter’s career choice. Digging up and exposing secrets is not something she appreciates, especially when they hit close to home. Rebekah is almost ready to give up on forging a relationship with the mother she only recently came to know.

Family rupture is also part of the story of Saul Katz, an ex-police officer in the 2014 portion of the story and, as fate would have it, part of the team that first investigated the deadly assault on the Davis family back in 1992. He is estranged from his wife and son for reasons the narrative makes clear.

Saul is also Aviva’s boyfriend, as well as Rebekah’s friend. Importantly, he is Rebekah’s pipeline to the Hasidic community, to which he once belonged.

Family dysfunction is also an element in the story of Joe, a California Jewish boy whose identity undergoes dangerous changes on the road to a psychotic, criminal adulthood in Crown Heights.

This is a novel of extreme tension — tension that ripples through almost all the characters, especially Rebekah. Her quest to become a respected professional, to make a life for herself in New York, to be a positive force in this troubled community, to face the dangers of urban life, to love and be loved.

Dahl’s handling of dialogue is sharper than ever. She pins down speech patterns so that the presence and personality of her characters is profoundly realized. Her treatment of Joe is a stunning case in point, but there are many others.

You can tell by now, dear reader, that Rebekah is key to inmate DeShawn’s future. However, to reveal too much about the steps along the way would defang the impact of this gripping, multidimensional novel. Rebekah’s persistence and growing mastery of investigatory skill runs parallel to Julia Dahl’s growing ambition and mastery of her craft.