A premier American dramatist tackles the whodunit…after his fashion. 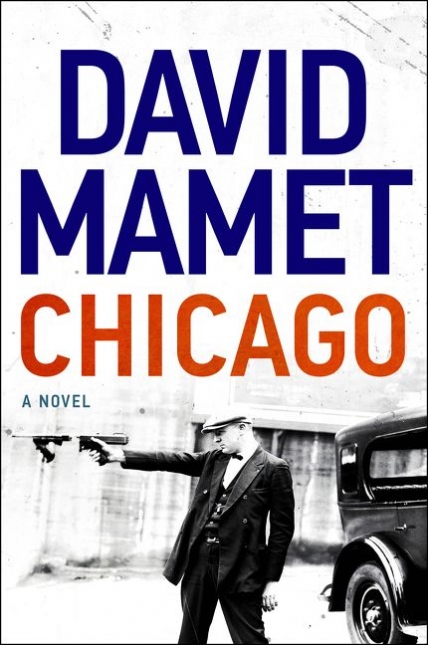 David Mamet, Pulitzer Prize-winning playwright and much-admired screenwriter, returns to the novel form in Chicago, his first work of longer prose fiction in 18 years. The book’s plot is ultimately one of detection and revelation, a classic quest for truth and understanding by a solitary figure.

Set in the 1920s, Chicago unfolds against a backdrop of speaks and honkytonks, gangland violence, police corruption, easy-on-the-facts journalism, and a starkly pervasive hypocrisy among the city’s white establishment.

The novel’s hero, Mike Hodge, is a decorated WWI flying ace turned reporter. As a journalist, Hodge has proven himself many times over as one of the most competitive players in a very competitive ecosystem of urban dailies. He covers any event that lends itself, with proper massaging, to just the right level of attention-grabbing elaboration:

“Jackie Weiss, Mike Hodge wrote, had died of a broken heart, it being broken by several slugs from a .45.

“His funeral was notable for the display of his widow’s undergarments as she hopped down into the grave and upon his casket, whereupon she began to scream, ‘Jackie, don’t leave me,’ and resisted the efforts of the chief mourners to haul her from the grave.

“It was, Mike wrote, as formulaic as a Gypsy wedding, with its ritual attempt at abduction, and the corresponding opposition by the brothers of the bride.”

This is where you might start if you want to get a handle on Mamet’s writing — with the language he crafts: snappy, allusive and implicate, and often slippery with sententious affectation from characters who can’t seem to stop talking.

In those moments where Mamet’s language soars, Chicago can be spellbinding. His virtuosity in constructing dialogue, plot-advancing or otherwise, is often most evident in his long sequences of one-on-one exchanges. This Mamet hallmark is anything but surprising coming from one of our most accomplished playwrights.

In Chicago, there are plenty of these recounted conversations. For many readers, these scenes will supply enough oomph to nudge the story onward through all this give-and-take, not to mention through the hero’s frequent ruminations on his life past and present.

Even so, the plot may not advance as compellingly as some might hope. Fans of traditional detective fiction are certainly accustomed to scenes where the hero(ine) and another character verbally volley their way to all-clarifying discovery.

But for readers attuned to another flavor of thriller — with hard-driving, less-reflective plots and spare conversation — well, maybe there’s not so much delight in store for you with this book. So, if you tend to zone out during scenes of clever repartee and mutual reflection, you might want to take a pass on Chicago.

When it gets going, the book is, at its heart, an archetypal detective story. Chicago traces its hero’s pursuit of love and truth, first in his heart-swelling romance with the virginal daughter of an Irish-American florist.

Later, when events force him into a search for her killers and an understanding of their motives, he’s drawn into a discontinuous quest through Chicagoland’s tangled undergrowth of opium dens, gang hideouts, speakeasies, nightclubs, and the city’s premier brothel, where black prostitutes service prominent white johns.

Mike Hodge is by turns familiarly hardboiled and touchingly lovelorn. His pilgrimage — not unlike those of quest heroes both medieval and modern — is punctuated by descents into befuddlement and debilitating confusion, though Hodge’s dark nights of the soul are largely alcohol-fueled.

As he climbs back into the light, his investigation finds new focus via his increasingly to-the-point one-on-ones with two friends, newsman Clement Parlow and Peekaboo, the madam at the aforementioned brothel.

Hodge pieces together his answer as he works his way through “button” men, gangland bosses, both the widow and the fleeing mistress of a slain, mob-connected saloon owner, a wrongly convicted black ex-con, and several others who fill in the nagging gaps that have tormented him.

Slow-moving but richly revealing, Chicago won’t please everyone who picks it up, but many readers won’t want to put it down.

This crossover YA story — aimed at both adults and teens — tackles childhood angst, parental malfeasance, and other tough topics

A Nasty Piece of Work

A disillusioned CIA operative turned PI takes on a case only to find that the man he's searching for may not exist.