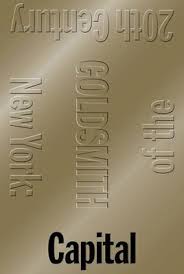 It’s hard to talk about Kenneth Goldsmith’s books without talking about the man himself, in no small part because he has worked so hard to make sure that his fame precedes him. For almost two decades now, he has acted as a cheerleader for the 20th century’s avant-gardes — as a deejay (of his now-defunct radio show), an online curator (of the invaluable Ubuweb.com), an editor (of the interviews of Andy Warhol), and as a promoter and practitioner of a brand of poetry he calls “uncreative writing.”

He has read at the White House and appeared on “The Colbert Report.” At a time when most Americans cannot name the country’s poet laureate, Goldsmith might well have better name recognition than most living poets. Be that as it may, he is inarguably the best-known literary vanguardist out there.

That said, we shouldn’t dwell on the man, or rather, on the highs and the recent lows of his brand. (If you want to follow the accusations of racism that have dogged him in the last few years, a recent New Yorker profile is a good place to start, though that article raised as many questions as it answered.) Rather, we should consider Goldsmith’s new book, Capital: New York, Capital of the 20th Century, on its own terms.

It weighs in at almost 900 pages. It looks serious. It asks you to consider it as a major work of uncreative writing. Even so, you just can’t escape the logic of branding these days. After all, “uncreative writing” is a slogan and, what’s more, it defines something not altogether new. Language from non-poetic sources reframed as poetry is a century-old avant-garde tradition.

Capital belongs to that tradition. It is nothing if not uncreative. Goldsmith has not written a word of it. He culled all its sentences and paragraphs from print sources, and he borrowed the book’s form — quotations organized by theme — from Walter Benjamin’s great Marxist cabinet of curiosities, the unfinished and unfinishable The Arcades Project. Goldsmith even lifted his title from one of Benjamin’s essays, “Paris, Capital of the 19th Century.”

Benjamin, who committed suicide while fleeing the Nazis in 1941, looms large in both literary and theoretical circles. An aberrant Marxist and heretical Jewish mystic, he spent the last years of his life working on a book on French poet Charles Baudelaire. Benjamin wanted that book to trace an archaeology of his times, the 1930s. How had European culture reached the terrible crisis of Nazism? He wanted it to account for the intricate relations between capitalism, culture, Fascism, and revolution.

Benjamin never wrote his magnum opus. All we have of his mammoth intellectual panorama are the few essays and the hundreds of pages of notes that editors brought together to make up The Arcades Project. Carefully stashed in folders, Benjamin’s notes consist of meticulously copied quotations and his commentaries based on those quotations, which are theoretically rich and maddeningly elusive.

Drawing as they do on his complex and sometimes esoteric understanding of philosophy, political theory, urban planning, literary history, and the minutiae of French everyday life in the mid-19th century, they are all linked by Benjamin’s sense — derived from Marx — that the genius of capitalism lies in its ability to restructure the world around the abstractions of the market.

As Benjamin collected his quotations and wove his commentaries together, he worried about the presentation of his material. He dreamed of a perspicuous arrangement that would make even the most arcane or trivial datum self-evident. Needless to say, he never succeeded. After all, it is unfair to ask facts to speak for themselves.

It is clear, however, that The Arcades Project was not the book he dreamed of. Nor, as scholarship clearly demonstrates, is it a book that Benjamin would ever have published. A posthumous creation of his editors, it stands as a ruined memorial to his erudition and his vision, not as a completed monument to his achievement.

Goldsmith has taken Benjamin’s rather formidable model as his own, but with a twist. He proudly jettisons Benjamin’s commentary. Goldsmith is not interested in the tough connective tissue that holds Benjamin’s quotations together. He does not care, as he has said on numerous occasions, about Benjamin’s politics. Rather, Goldsmith is fascinated by the armature of The Arcades Project and adopts Benjamin’s provisional organization — all those folders of notes — as a method.

But filing is not really a method; it’s just good office hygiene. And so there is something decidedly odd about Goldsmith’s appropriation of Benjamin. He is poaching on Benjamin’s glamour and pathos, while ignoring the commitments and the gravitas that underwrote them. But Goldsmith is a poet, not a scholar, and perhaps we should give him a pass. He is, after all, pursuing his own ends.

As it turns out, the best and the worst you can say of Capital is that it is pleasant enough. It presents a nostalgist’s account of New York in its first and second heyday. Not for nothing does it begin with a quotation from Woody Allen’s “Manhattan.” Something of the soft-focus spirit of Allen’s retro stylings hangs over Capital’s broad expanse. (Cue the beginning of “Rhapsody in Blue” and you’ll get the point.)

Something darker hovers there, as well: E.B. White’s brilliant valediction, “Here Is New York.” But even then, Goldsmith doesn’t want to push things too far. White’s 1948 essay ends with a famous vision of the Cold War bombers that “make the city destructible.” Goldsmith’s book ends on a more upbeat note. It offers as a coda White’s earlier paean to the city’s goofy implausibility, its resilience, and its pluck.

Of course, things aren’t all rosy in Goldsmith’s New York. The Triangle Fire finds its place there, as does the Great Depression, the AIDS epidemic of the ’80s, and occasional riots. But in the end, Capital is more taken with wealth than poverty. It celebrates the pleasures and the paradoxes of the city itself.

Capital owes whatever success it achieves to sheer good writing. There are some wonderful passages in this florilegium, and you end up rooting for the brilliant writers in its pages — Ford Madox Ford, Theodore Dreiser, E.B. White, Meyer Berger, Luc Sante, Adam Gopnik and Philip Lopate, to name a few. And if the book is a success, it is because Goldsmith is as much an aesthete as a nostalgist, with a fine ear for period prose.

As befits an aesthete, Goldsmith devotes a fair amount of Capital to art and gossip. Not surprisingly, Warhol is the book’s tutelary genius. However, he is not the book’s focus. Where Benjamin concentrates on Baudelaire, Goldsmith looks to Mapplethorpe.

That substitution — the photographer who defines a decade taking the place of a poet who defines a century — tells you something about the way Goldsmith’s vision is determined by the tug of his own history. He was born in 1961 and therefore came of age under the sign of Mapplethorpe, not Warhol or Pollock or De Kooning.

So Capital ends up as a tribute to the romance of pre-Millennial New York and owes everything to Goldsmith’s sensibility. And when we view the book from that angle, we begin to notice just how peculiar the project actually is. Despite the tease of its title, Capital isn’t about capital. It’s barely about trade. It pays scant attention to production and finance and thus it bypasses the whole reason that New York came to dominate the last century the way it did.

In other words, Capital isn’t history. Or philosophy. Or sociology. Or economics. Or any of the things that The Arcades Project is. It is “literary” in some broadly traditional sense. It’s about well-turned sentences and urban ambience (or, more accurately, about the ambience of Manhattan; the other boroughs hardly register). If a city can be said to have “room tone,” Capital is about that tone.

To be fair, at its best, Capital reminds me of the numinous Edie by Jean Stein and George Plimpton. When it’s on, Capital resembles Stein and Plimpton’s polyphonic biography of Warhol’s fated superstar, Edie Sedgwick, which gives us a sense of what that bright moment in the mid-60s must really have felt like. Like Edie, Capital follows a more or less linear narrative. Its fragments aren’t that fragmentary.

So, for all its professed vanguard uncreativity, Capital turns out to be quite old-fashioned. Its outline follows the rules of realistic storytelling. More to the point, like Allen’s “Manhattan,” it is studiously middlebrow and protects the notion of art in a rather pious way. As a result, Capital has nothing to do with the vanguard poetics that Goldsmith has celebrated for years. The avant-garde has always wanted to épater la bourgeoisie — that is, deploy formal innovations and outré subject matter to offend (and finally, overcome) the bourgeoisie. Capital does nothing of the sort. It is formally quite tame and orderly. The avant-garde serves as a theme, not as a model.

In the end, then, Goldsmith’s book doesn’t really feel like Benjamin’s Arcades or any of the vanguard works on UbuWeb. If anything, it resembles a mid-century Hollywood biopic whose plot is as familiar as Balzac’s Lost Illusions or Fitzgerald’s The Great Gatsby. It’s about the way dreams don’t coincide with reality. It’s about “pluck.” And it’s about the way that good writing — anyone’s good writing — finally wins the day.