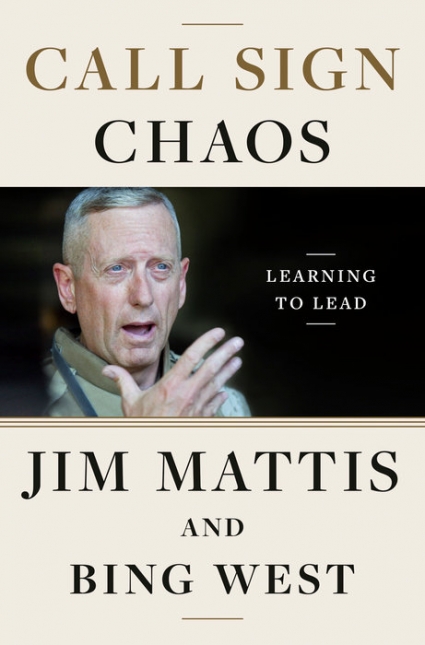 “You have the right to have a Secretary of Defense whose views are better aligned with yours.” That’s how Marine general Jim Mattis told president Donald Trump he’d be stepping down from the position after two years of service.

Mattis’ December 2018 resignation letter provided little explanation beyond stressing his belief in the importance of working with allies. That left the public salivating. What were the juicy details on the policy clashes spurring his departure?

Those looking for explicit answers in Call Sign Chaos, the general’s recently published memoir, will be disappointed. “I don’t write about sitting presidents,” he declares at the outset.

Mattis’ book instead focuses on articulating universal leadership qualities. Kudos for that. Public sniping between elites often only exacerbates what the general astutely sees as the biggest problem now facing that grand experiment known as American democracy: tribalism.

“We are dividing into hostile tribes cheering against each other, fueled by emotion and a mutual disdain that jeopardizes our future instead of rediscovering our common ground and finding solutions,” he wrote in the Wall Street Journal just prior to the book’s launch.

By presenting his own hard-earned insights on effective leadership qualities, Mattis encourages fellow Americans themselves to think more explicitly about leadership benchmarks applicable to civilians and the military alike. His subtext is clear, though: Let’s return to electing leaders capable of creating common ground and workable solutions. Let’s make America a great unified democracy again.

National policymaking requires leadership expertise in both warfighting and diplomacy. Mattis is skilled in the former. A penchant for moving aggressively and talking bluntly earned him the nickname “Mad Dog” (a Google search of “Mattis quotes” returns titillating reading). Over his 40-year career, Mattis earned diplomatic chops largely from three assignments — serving as executive secretary to two secretaries of defense, as NATO’s Supreme Allied Commander Transformation, and as head of U.S. Central Command.

He played a key role in dismantling the second position; during the third, his maxim for succeeding in Iraq was: “Be polite, be professional, but always have a plan to kill everyone you meet.”

Would Mattis’ benchmarks leave out the leadership skills of a more-rounded warrior-diplomat? I’ve been studying the leadership of Gen. John Shalikashvili, a low-key Army officer with a flair for constructive consensus-building on complex and diplomatically sensitive problems. Examples abound: leading an unprecedented multinational coalition in the rescue of over 500,000 Kurds trapped along the Iraqi border following Gulf War I; helping secure “loose nukes” in the former Soviet Union as Gen. Colin Powell’s assistant; serving as the military head of NATO during a critical year in its evolution; and topping off his career as chairman of the U.S. Joint Chiefs, the president’s top military advisor (1993-97).

Prone to drawing smiley faces on correspondence to acquaintances, Shalikashvili was a man nobody would think to call “Mad Dog.” He was most known as a “gentleman.”

Yet, after reading Mattis’ book, I actually found that despite the two officers’ different personalities and areas of expertise, Shalikashvili would surely have often nodded along in agreement if he were alive today to read Call Sign Chaos himself.

The bedrock trait of leadership is competence. But “your personal experiences alone aren’t broad enough to sustain you,” Mattis warns. Throughout his career, the Marine expanded his knowledge by talking to veterans who’d fought before him. And by reading relentlessly, as evidenced by the appendix listing Mattis’ favorite books, as well as the memoir’s inclusion of wide-ranging leadership quotes — from Dwight Eisenhower, Winston Churchill, Henry Kissinger, Rudyard Kipling, Oliver Wendall Holmes, Thomas Jefferson, and many more.

Why books? Because “reading gives historical depth that lights the path ahead.” Mattis also trained his Marines “to rehearse until we could improvise on the battlefield like a jazzman in New Orleans.” In sum, with the proper knowledge and training, “We could always create options.”

Effective problem-solving invariably requires working with others. In terms of running a unit, Mattis eschews “command and control” and instead practices “command and feedback.” The commander is primarily responsible for defining the “what” and lets others take the initiative in defining the “how.” This requires leaders to “listen, learn, help, and then lead.” It’s an approach that gets the best out of both the individual and the team.

Effective communication is key. “If a corporal on the front lines cannot tell me what my intent is, then I have failed.” So Mattis hones statements that succinctly but accurately convey complex issues, relying on the discipline of writing to force him to be more exact, thereby sharpening his thinking. He’d regularly craft documents called “Commander’s Intent” to ensure everyone clearly understood the unit’s goals for major missions.

A commander’s intent can never be self-serving. You don’t chase popularity, Mattis urges, but instead build trust and affection. One critical way to demonstrate this care, Mattis' second "C," is by becoming invested in the success of others: “All leaders should be coaches at heart” is Mattis’ take.

This commitment extends beyond the unit to the country and its allies. It’s no accident that, in the opening chapter, Mattis notes he was raised by a generation versed in the epitaph on Jackie Robinson’s tombstone: “A life is not important except in its impact on other lives.”

The above principles apply to leaders across the spectrum. In a telling anecdote, Mattis asks the king of Jordan what it’s like being king. “I’ve been writing op-eds,” Abdullah replies. “I can’t just issue an order to get things done. I need my people with me.”

Not only do America’s elected leaders need the support of the public, Mattis writes, but also occasional help from allies. “When you are going to a gunfight, bring all your friends with guns.” He further explains: “Nations with allies thrive, and those without them wither. Alone, America cannot protect our people and our economy.”

Mattis believes that just like a unit commander, national policymakers must also provide a clear mission statement. (He singles out George Schultz’s 1984 speech on terrorism as being particularly thoughtful and clear.) And while policies can change as goals shift, these goals must remain not just realistic and coherent but also consistent: “We must mean what we say, to both allies and foes.” That's the third "C" — character.

All told, this process of working with others — whether up or down the chain of command, with other branches of government, with the citizenry, and with allies or even enemies — isn’t easy. As Mattis quotes Eisenhower, “I’ll tell you what leadership is. It’s persuasion and conciliation and education and patience. It’s long, slow, tough work. That’s the only kind of leadership I know.”

The above is just a sampling of the leadership benchmarks Mattis lays out in his book. Each would have provided opportunity for the retired Marine to have laid out his criticisms of Trump.

For Call Sign Chaos has a larger and more pressing message: Let’s not focus on the people we believe haven’t measured up. Let’s get busy taking the measure of new candidates who will. Let’s do what it really takes to make America great again.

Andrew Marble, Ph.D. (Brown University) is author of Boy on the Bridge, a biography of former chairman of the U.S. Joint Chiefs of Staff Gen. John Shalikashvili (Univ. Press of Kentucky, October 2019), available at www.boyonbridge.com.