An exquisitely produced ode to a long-ago comic genius. 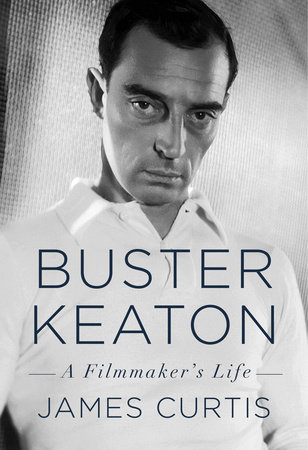 James Curtis’ hefty new Buster Keaton: A Filmmaker’s Life is a gift to movie lovers. It’s a gorgeously formatted and produced volume, both precise and exhaustive in tracing the life and creative pursuits of the brilliant comic artist and sometime film director who reached his apogee in the 1920s. It’s perfect for a leisurely read or a stint of index-dipping into the performer’s long life and career.

Born more than 125 years ago, Keaton became a star rivaling Charlie Chaplin in the final decade of the silent era. But unlike Chaplin, whose fame barely flagged in the transition to talkies, Keaton more or less dawdled on the outskirts of celebrity, an occasional presence for most of 40 years in a few generally mediocre movies and hit-or-miss appearances on the small screen.

The 1930s were especially bad for Keaton. He sank into a period of alcoholism and too frequently indulged a recurrent impulse to gamble large sums. He divorced twice, crashing and burning in what our forebears, with glances averted, would term a “nervous breakdown.”

Then, a new marriage — to a strong woman 19 years his junior — put Keaton back on a stable, if creatively ascetic, path through TV appearances and occasional Beach Blanket teen-exploitation flicks. He died in 1968, lionized by Hollywood pros and French critics but pretty much a hazy onscreen phantom to the movie-going public.

Even at his creative peak in the 1920s, there were troubling portents, among them Keaton’s uninspiring first marriage to Natalie Talmadge, the least celebrated among three screen-star sisters, all of them inordinately attached to their domineering mother. Natalie’s private indifference to Keaton, which she apparently imprinted on their two sons, never quite blunted his need to show off or his incessant compulsion to hang out with film-industry bros or to bag an occasional ingenue. All of the above, perhaps, kindled his drive to make ostentatious purchases, including an estate rivaling the nouveau-riche palaces of his Hollywood peers.

It's a familiar tale, the creative genius gone astray, but make no mistake: Buster Keaton was a comic genius and, for a too-brief period, a film auteur of the highest magnitude. He served as director for all but a few of his silent films — shorts, two-reelers, and features alike — and proved himself a master of special effects, camera positioning and movement, pacing, and editing.

His skills as a comic performer were at least the equal of Chaplin’s, and without all the cloying sentimentality. Keaton’s niche was securely in the deadpan zone. Critics dubbed him “the Great Stone Face” and saw him as a stoic daredevil who would hurl himself into a dizzying, somersaulting descent down a mountainside or a 20-foot leap off a roof, then spring back, mid-stride, face frozen, to outpace a horde (by which I mean hundreds) of determined pursuers.

A few film actors who followed — Cary Grant and Burt Lancaster come to mind — were ex-acrobats whose athletic panache often shone through on screen, but neither equaled Keaton’s commitment to stunts that appeared to risk life and limb.

He came by this reckless physicality naturally, a performer since the age of 3 in his parents’ vaudeville act. His primary schtick: being flung headlong across the stage, off the stage, into furniture and walls, and then (you guessed it) springing back in nonplussed resignation. His dad, Joe, devised a clever device — a hidden suitcase handle sewn into Keaton’s costume — that made this bit of business easier on Joe, though probably not on his boy.

There are more than a few thrilling comic moments in the book that will stand out vividly for fans of Keaton’s movies. Curtis mentions his dazzling, shoulder-wrenching grab of a passing car in “Cops” (1922) and his celebrated close call in “Steamboat Bill, Jr.” (1928), where a collapsing building falls on him in real time but fails to smash him into a pulp, thanks to a precisely placed window opening.

For this reviewer, there are many other high points, notably a brilliantly conceived, shot, and edited sequence in “One Week” (1920) when Keaton’s character and his wife, having constructed a small house, are attempting to move it. It becomes stuck on a train track (please suspend disbelief here, reader; this is the silent era). Keaton the director sets up an extreme long shot over the house’s upper left rooftop, where we glimpse a locomotive closing fast, probably a half-mile away.

As the train nears the point of likely collision, the two characters struggle to push their new house off the track. They give up at the last moment, leaping away and saving themselves. As they (and we) brace for impact, the train roars past on an adjacent track. The couple rejoices…but then another train, emerging unseen from the opposite direction — behind the camera and our vantage point — speeds through, obliterating the house.

“Seven Chances” (1925) offers another Keaton gem. The film has lost some of its luster because of comic stereotyping, but it climaxes with a spectacular foot chase, again by hundreds of angry pursuers, through nightmarishly incongruous landscapes: a football field to a cornfield to an apiary to a swamp to a desert to an ironworks to a lofty mountainside. In this last locale, a rockslide stirs to life as Keaton dashes past. It starts with bowling-ball-size stones and progresses to eight-foot-wide boulders, which he must dodge as he sprints downhill, sometimes falling and occasionally somersaulting.

In addition to a closely observed recounting of the performer’s life, the author supplies extended narratives centering on the making of Keaton’s silent classics and a comprehensive chronology and production credits for all his films. To achieve this, he draws on the wealth of published material available: the general, trade, and fan press, plus the many autobiographies and memoirs of key supporting figures. The factual detail may be beyond the expectations of the casual reader, but it’s indispensable to the specialist.

What’s lacking, perhaps, is thoughtful critical consideration and analysis of Keaton’s artistry, but James Curtis, leaving that to other commentators, gives us far more than enough.