Disfigured during combat in Vietnam, Robert Timberg transformed his life by becoming a distinguished journalist. 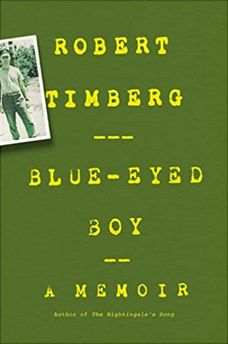 So Bob Timberg assures us toward the end of Blue-Eyed Boy. But they suffer, probably more than most of us can imagine. That refusal to weep, in some ways, summarizes Timberg’s memoir.

The title of the book comes from an e.e. cummings poem on the demise of Buffalo Bill. The last two lines read, “how do you like your blueeyed boy/Mister Death.” Despite the deliberate vagueness of the allusion, the reader is led to associate Timberg himself with the image of the blue-eyed boy, a man who achieved mighty things. But one fact distances Timberg from that icon: He doesn’t have blue eyes. The reader, intentionally I believe, is left to wonder.

Timberg’s tale is the story of a man determined to count and to make a difference. “I wanted to do something that mattered, that gave my life meaning,” he tells us early in the narrative. So he went to the Naval Academy (class of 1964), became a Marine officer, and deployed to Vietnam. Thirteen days before he was due to complete his combat tour, his vehicle struck a mine. The explosion should have killed him, but he survived with third-degree burns over much of his body and his entire face.

Years of pain and recuperation followed. He endured 35 operations, most of them to restore his appearance to the point that people would not find him ghastly. Perhaps most moving of all was what he endured when he left the safety of his home: “Random strangers glancing absently in my direction, their eyes momentarily widening before abruptly turning away. Folks in conversation hastily lowering their voices as they caught sight of me. Children being children, freaking me out. Street people promising to pray for me.”

But Timberg was blessed with a wife, Janie, who stuck by him. Largely through her encouragement, he changed himself from a man hiding from the world into a leading journalist. First he completed a master’s degree in journalism at Stanford, and then became a cub reporter and found out he was very good at his work, despite his inexperience.

Working harder than most, he moved upward in the reporting business until he achieved the top rung: White House correspondent for the Baltimore Sun. His career was crowned with a book, The Nightingale’s Song, an analysis of the Iran-Contra scandal and the men at its heart.

His book on Iran-Contra brought with it a transformation Timberg wasn’t expecting. He calls it his identity crisis. As he studied and interviewed the three men most culpable in the affair — Bud McFarlane, Oliver North, and John Poindexter — he realized that he shared with them a common and defining experience: All three were Naval Academy graduates, and two of the three had seen combat in Vietnam.

As Timberg reviewed the criticism leveled against the three, he detected a consistency: an anti-Vietnam, anti-military bias. He came to understand that Vietnam “had scarred the nation no less than it had scarred me…those scars had never faded or softened.” Many Americans, he concluded, were in one of two camps: those like him who had suffered through the war, and their critics, who blamed the sufferers for the consequences of the war.

Timberg describes his discovery this way: “You can’t march a generation…off to war, have its members suffer the pain and anguish that accompanies all wars, then tell them that it was all a big mistake, without sooner or later paying a price. Especially when much of the rest of that generation came up with novel ways to leave the fighting and dying to others.”

In his search for the meaning of Vietnam, Timberg sought out two other men who shared his personal history, John McCain and James Webb. In both, but particularly in Webb, he found the wisdom he needed.

Webb is more saddened than angered by the vitriol against the Vietnam vet and has tried to bring the opposing viewpoints together. Timberg quotes him in a statement that seems to me to be the best resolution: “Those of us who have seen war’s ugliness know that a battlefield does not honor its dead, it devours them without ceremony. Nor does a battlefield honor heroes. It is for those who survived to remember sacrifice and honor our heroes.”

Success, won in part by Timberg’s willingness to outwork everybody else, took its toll. His marriage crumbled. He married again, but that marriage eventually collapsed, as well.  Perhaps the most painful text in the book is Timberg’s unalloyed honesty in admitting his failures, particularly in his marriages. He accepts the blame for the deterioration of both and owns his guilt, especially with respect to Janie, who’d stood by him through thick and thin, but finally had enough when Timberg had an affair and then lied about it.

The writing throughout the book is flinty but peppered with distinctive Marine vulgarisms and one-liners that kept this reader grinning. “This is a tale only Karl Marx could love,” Timberg says at one point. At another, he refers to his disfigurement as “my run as a sideshow attraction.” In a different passage, he describes his acceptance of those who reviled Vietnam vets: “I had packed away my anger and resentment in an imaginary footlocker on which I had scrawled Do Not Open.”

Blue-Eyed Boy offered this reader three major insights. First, most men who have reached laudable goals lay no claim to superiority. They achieved their lifetime objectives, doing something that mattered, by working harder than anyone around them. Timberg fits that mold. In that respect, he resembles Jim Webb, whose autobiography I recently reviewed.

Second, through Timberg’s writing, I have come to understand that Vietnam really did shape the lives of all who lived through it, myself being a primary example. None of my generation escaped without scars.

And finally, Timberg observes about Vietnam that subjecting a generation to war, then claiming that that war was a mistake, exacts a price. Could not the same observation be made about Afghanistan and especially Iraq? Or perhaps current and recent generations will be spared an aftermath like the one that followed Vietnam solely because the few of us who went through the anguish of those wars are so effectively isolated from the rest of the U.S. population that no one will notice.

To wit: How many Americans even know the nation is currently at war?

Tom Glenn spent many years doing undercover intelligence in Vietnam. His Vietnam novel-in-stories, Friendly Casualties, came out in 2012. This year, Apprentice House of Baltimore published his most recent novel, No-Accounts.