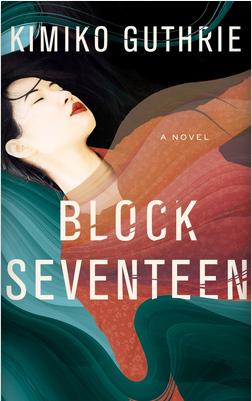 First-person narrations are fraught with ambiguity. Because they are told from one perspective, the reader must be on alert for indications that things may not be as they seem.

Enter Jane (aka Aki), the heroine of Block Seventeen, Kimiko Guthrie’s finely written novel about a half-white, half-Japanese woman whose life is in limbo as she comes to terms with her ancestral past and her own conflicted present.

This dichotomy — the hyphenation that defines so many Americans — is a key part of the novel, illustrating the cultural ambiguity that hyphenated Americans often experience. But there is more to this story than a struggle with identity and temporal anchorage. A lot more.

Block Seventeen follows three generations of Jane’s family, beginning with her immigrant grandparents and continuing with her mother, all of whom spent time in Japanese internment camps during World War II.

Jane is sansei (or, at least, half sansei), a term used to describe third-generation Japanese Americans, and the main story, of course, is hers. But the ancestral stories — those of her grandparents, whose hotel in Los Angeles was confiscated when they were imprisoned, and those of her mother — are woven throughout, taking the reader back and forth between past and present, between memory and denial, in a psychological kabuki that defines Jane’s life.

As the story unfolds, we learn something is not quite right with Jane. It’s not just that she denies her heritage (her real name is Akiko, in honor of an infant uncle who mysteriously died in the camps). It’s that some of the things happening to her don’t appear grounded in reality. Life bubbles up and repeats itself as if ancestral spirits have come to haunt her.

Jane’s mother, for example, has gone missing. Or so Jane believes as she attempts, over and over, to find her. At times, she manages to speak with her mother on the phone or, later, on Facebook, but it’s as if the older woman only exists in the ether. Only once does Jane meet her mother in person: in a popup boutique located inside a mysterious building — a popup boutique which, like all popups, later disappears.

Soon, we learn that Jane sleepwalks. During these episodes, she builds towers and creates havoc in her apartment, all unknowingly. And throughout the story, she has visions: of her mother, of her infant uncle, of monsters in the attic.

Finally, Jane seeks help and is put on medication, which seems to stabilize her — though how stable she becomes is questionable after she decides what’s good for her is good for her paranoid fiancé, Shiro, and secretly starts sharing the pills with him.

Meanwhile, Jane constantly hears the cries of a baby (echoes of Uncle Aki?) coming from the neighboring apartment — an apartment which, we later learn, is uninhabited.

Missing mothers who materialize only on Facebook? Strange popup boutiques? Crying babies who do not exist? Are we to believe that what Jane is experiencing is real? And how do these experiences relate to her past and her unrecognized desire to come to terms with it?

Family history, it seems, repeats itself, and Jane appears to be reliving — or is haunted by — her family’s past:

“[Jane’s mother] was determined to stop her episodes. Paranoid, delusional episodes. As a child she used to believe she’d find him [Uncle Aki] and the two would play together. Strange games, by a river, when they were interned in Arkansas, during the war. But then one day she couldn’t find him anymore. She began sleepwalking — looking for him in her sleep. She’d have elaborate hallucinations, horrid stuff — great monsters with horns and multiple eyes or some such, if you can imagine…she’d hear him crying for her. In the end, nothing worked but medication.”

Jane’s story is a repetition: a reenactment of her family’s journey. On one level, it’s an immigrant story. On another, it’s a story of a people betrayed by society. A story of how cultural wrongdoing impacts subsequent generations. And a story of how the children of immigrants attempt to reconcile their American lives with the lives of those who came before them.

Mike Maggio’s newest collection of short fiction, Letters from Inside: The Best of Mike Maggio, was released by Vine Leaves Press in October 2019. He is conducting a donation campaign on his website to benefit those affected by the covid-19 pandemic.