Best. State. Ever.: A Florida Man Defends His Homeland

A hilarious and insightful tour of the Sunshine State. 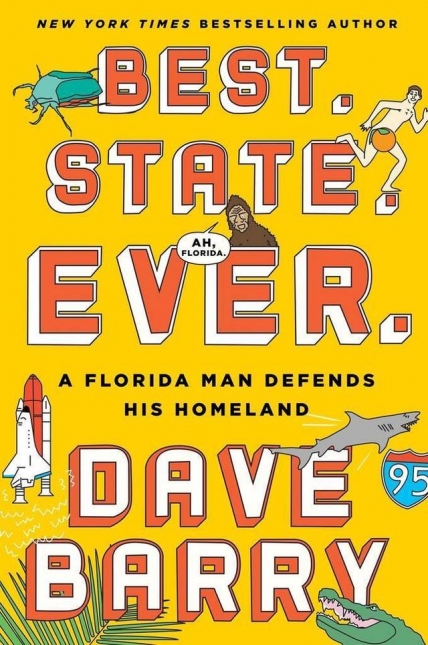 Dave Barry has long been one of the funniest writers in the United States and one of the shrewdest analysts of the ridiculous in our manners and mores. During and after his two decades as an award-winning columnist for the Miami Herald, Barry has offered snappy prose that makes one laugh out loud. This new book finds him cracking wise as he poses as a Florida tour guide who makes no apologies, but rather revels in the nonsense found in his beloved state. Laughter is the best defense.

A brief history of Florida follows, as only Barry could conceive it. He argues that Florida emerged during a period called Global Rising and that the first humans crossed land bridges from Asia to and through North America in search of spring break. He notes that the Florida Land Boom was curbed by a 1926 hurricane that turned Miami back into a sleepy little village, but one with far more kindling.

And so it goes: “Under Florida’s ‘stand your ground’ law it is legal to kill anybody for any reason as long as you are standing on your ground.” A recent court ruling: “sitting is also OK.”

Then the tour begins.

Barry provides a fine “on the road” frame around his fresh version of the Skunk Ape story. He compares the Skunk-Ape Research Headquarters to “a tiki bar frequented by motorcycle gangs.” The master of this domain, Dave Shealy, is always looking to add new attractions to his campground and roadside attraction. Barry applauds him as a survivor of changing times, himself “an endangered species.” No skunk apes were spotted during Barry’s visit.

A supercharged chapter links visits to Weeki Wachee, with its lovely dancing mermaids, and Spongeorama, with its…sponges. Weeki Wachee, born at the beginning of the Florida tourist-attraction boom, rocketed when the American Broadcasting Company bought the spring in 1959. Since its heyday, it has continued to struggle along, though Barry admits that it’s “low-key bordering on sleepy” that endures as if “the fifties never ended there.” It’s a kind of time machine to a more pleasant America.

Spongeorama is a highly informative place that needs a facelift. Barry has fun following advice in the educational film on choosing the best sponge for his needs. He settles on the wool sponge — “the Cadillac of sponges.”

Barry lodges at Hotel Cassadaga, his refuge while exploring “the Psychic Capital of the World.” The town of Cassadaga is another Florida landmark set back in time. When a spiritual medium named Judy fits Barry into her not-so-crowded schedule, he just can’t resist. When she “sees” canisters and asks if canisters were important in his life, Barry feels he should cooperate, but he ends up letting the medium down.

Nor does the number 76 mean anything special to him, as Judy suggests it might. The Q&A between Judy and her new client is hilarious, though probably not to her. Barry insinuates that there might be some faking going on in this historic, possibly haunted town.

But the place that he considers the height of fake is actually quite new. This is the burgeoning metropolis for seniors called the Villages. Boomtown for boomers and their elders, it is rumored to have a swinging lifestyle hidden under a veneer of act-your-age propriety.

Barry tours the expansive nouveau city and its several sub-communities, with their village squares, golf courses, and mains streets. These neighborhoods are “nice in the way Disney’s Main Street, U.S.A. is nice. Nice, but fake.” One community has fake historic plaques inscribed with fake histories.

Entertainment in the Villages includes dancing. Barry calls the main style “White Person.” Some of it is disco, some of it is line dancing, and some of it is solemn, formal, precisely correct ballroom dancing.

This fairly lengthy treatment of the Villages sets readers up for “Lock and Load Miami” and “Key West.”

Barry’s local history blends with present-day features of these iconic places. His treatment of the updated Fountainbleau’s LIV, perhaps “the hottest nightclub on the Beach…and thus one of the hottest nightclubs in the world,” shows Barry at his best as a lifestyle journalist. He can’t resist testing his skills at Lock and Load, including its popular “Machine Gun Experience.” After vibrating on the LIV dance floor with and without the weapon, he isn’t even ashamed of himself.

Key West? Another masterpiece of cultural insight rolled out with a smile. Barry explores the Duval Street bar-hopping scene in high spirits. This scene has been handled by many writers, but Barry makes it new again — even though the endless Jimmy Buffet imitations dotting the booze trail get old.

Dave Barry’s cleverly clownish insights, devilish wordplay, and obvious love for what he ridicules will delight his fans while addicting newcomers to his zany vision.