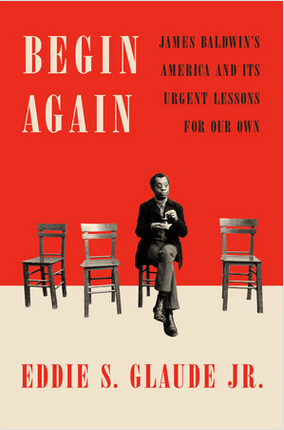 Gird yourselves, white America: Eddie S. Glaude Jr. is putting you on notice, and he brought the receipts. The James S. McDonnell Distinguished University Professor of African American Studies at Princeton prefaces his eighth book with praise quotes from several platinum authors who laud his brilliance and the genius of his subject on display in Begin Again: James Baldwin’s America and Its Urgent Lessons for Our Own.

To begin again on the subject of racism, Glaude proposes passing H.R. 40, a bill that would establish the Commission to Study and Develop Reparation Proposals for African-Americans. It’s a suggestion that comes at the end of what the author himself describes in his introduction as “a strange book. It isn’t biography...it is not literary criticism...it is not straightforward history. Instead, Begin Again is some combination of all three in an effort to say something meaningful about our current times.”

Glaude starts gently but then lowers the boom. His book is a damning indictment of Donald Trump and white America, particularly white male America — or at least that part of it which believes in its superiority simply because it’s white.

Additionally, this book, provocative and lyrical in so many places, is Glaude’s personal journey through a tunnel of rage first explored by James Baldwin (1925-1987), whose writing — “close to seven thousand pages of work” — the professor has absorbed and studied and taught.

In Begin Again, Glaude challenges “the lie” that America is fundamentally good, that all men are created equal, and that the country is a beacon of light and a moral force in the world. “The stories we often tell ourselves of the civil rights movement and racial progress…[are] all too often lies,” he writes.

Instead, says the author, America is a racist nation that continues to tell the lie that it is a democracy while refusing to face the enduring legacy of slavery and ongoing systemic discrimination against African Americans.

With Baldwin as his guide, Glaude moves from the nonviolence practiced by Martin Luther King Jr. to the militancy of Huey P. Newton, Stokely Carmichael, and the Black Panther Party, the latter a “justifiable, even inevitable, response to white America’s betrayal of the civil rights movement.” Along the way, he lashes Richard Nixon’s “silent majority,” Reagan Democrats, and Trump voters for propagating “the lie.” Finally, Glaude concludes “that America is an identity that white people will protect at any cost.”

By 2016, he had become so disgusted by the Democratic Party for refusing to remedy Black suffering that he urged Black voters, many whose ancestors had paid with their lives for the right to vote, to abstain from voting for Hillary Clinton for president. His reasons seemed petty in the extreme:

“Much more was required than the Clinton name, or the endorsement of her bid for the presidency by President Obama, or by some celebrity, or the brandishing of hot sauce in [her] handbag.”

Choked by rage, he used his considerable influence to urge Black voters to leave the presidential ballot blank. Then the Republicans nominated Donald Trump. Still, Glaude refused to believe white America would elect “the carnival barker” to the highest office in the land.

Trimming his sails a bit, he co-authored an anemic essay in Time magazine with Fredrick Harris, a political scientist at Columbia, saying that if you were a Democrat in a battleground state like Wisconsin or Pennsylvania, you should vote for Hillary. But if you lived in a decidedly red state or an overwhelmingly blue one, you could blank out or vote your conscience.

Startlingly, the professor, who has studied Baldwin for 30 years, seems not to have learned from his mentor, especially on the value of presidential voting. In “Notes on the House of Bondage,” Baldwin ponders the 1980 presidential race between Jimmy Carter and Ronald Reagan:

“My vote will probably not get me a job or a home or help me through school or prevent another Vietnam or a third world war, but it may keep me here long enough for me to see, and use, the turning of the tide — for the tide has got to turn. And…if Carter is reelected, it will be by means of the black vote, and it will not be a vote for Carter. It will be a coldly calculated risk, a means of buying time.”

To his credit, Glaude admits his error. “I was wrong,” he writes, “and given my lifelong reading of Baldwin, it was an egregious mistake.”

Far less egregious, but still a mistake, was to publish this book without providing any photographs, especially since Glaude frequently refers to instances that demand illustration. For example, he writes about Sedat Pakay, a Turkish photographer who “offers a beautiful black-and-white portrait of Baldwin in the most intimate of settings.” No picture.

In another instance, Glaude refers to the opening of “I Heard It Through the Grapevine,” a documentary of Baldwin’s time in the South during the Civil Rights movement, in which he sits “at a desk in his brother David’s apartment at 209 West Ninety-seventh Street, looking pensively at a book of photographs.” No picture. (Glaude writes pages about his own tour of the Legacy Museum and the National Memorial for Peace and Justice in Montgomery, Alabama, yet provides no pictures.)

He ends his book, appropriately, with a visit to Baldwin’s gravesite at Ferncliff Cemetery in Hartsdale, New York. Was it a simple marble stone, a granite slab, a large headstone marked with a quote? Or a family mausoleum to enfold Baldwin and his seven siblings? Sadly, there is again no picture. Glaude writes only that he knelt down, touched the earth, and quietly said, “Thank you.”