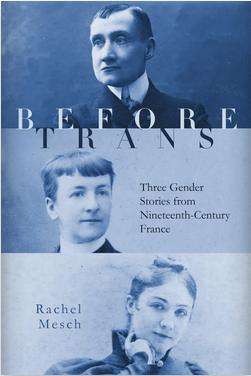 Good historical nonfiction can do two things for us: It can open doors, and it can hold up mirrors. A well-researched author of the genre strives not only to show us facets of the past we were unaware existed, but new angles of the present as well. Rachel Mesch, professor of French and English at Yeshiva University, does both in Before Trans: Three Gender Stories from Nineteenth-Century France.

At first glance, the heavily academic nature of Before Trans might seem intimidating. Casual readers may find themselves wondering, as I did, whether Mesch’s treatise will overwhelm them — especially because it addresses the complex topics of gender studies and women’s rights. In only a few introductory pages, however, Mesch does such a masterful job of relating to her readers, as well as her subjects, that we feel safe in her hands.

Quickly banished, too, are any concerns that this work may be stuffy or stodgy: Introducing Montifaud, the heroine of one of the gender stories, Mesch relates:

“Despite repeated death threats, an attempted poisoning, and set-ups meant to prove her sexual impropriety, she continued to churn out controversial historical works, in addition to works of fiction that mocked the political forces out to get her.”

Montifaud is, in fact, the last of the three women Mesch discusses in Before Trans. The first, Jane Dieulafoy, is equally fascinating, if in a wholly different manner. Where Montifaud was reckless, irreverent of convention and boundaries, Dieulafoy was a quiet resister: She found ways to circumvent tradition while still adhering to her traditional values.

After exploiting a military loophole that allowed her to accompany her husband, Marcel, to the frontlines of the Franco-Prussian War as a sharpshooter rather than as a cantinière (domestic helper), Dieulafoy began to grapple with her identity, which she felt was inadequately defined as either woman or man.

“Her female ideal embraced both masculine and feminine traits, unlike the New Woman, who rejected family structures entirely,” writes Mesch. “In order to advocate for a better future, she always turned toward the past, where she found a handful of examples of a less rigid model of femininity.”

Dieulafoy would be able to explore an entirely new model of femininity during her wildly successful subsequent travels to Persia as an archaeologist alongside Marcel. She wore men’s clothes throughout her time there, rationalizing them away as a necessity in a foreign land where presenting as a woman would have held her back.

After Dieulafoy returned home, however, to continue her long and illustrious career as a writer in some of the most exclusive — and conservative! — French circles, it became clear that she had no intention of returning to any pretension of the femininity that was inimical to her.

“Rather than doubt her own femininity, then,” writes Mesch, “Dieulafoy redefined the meaning of the word. Fighting in wars and working alongside men did not make her less of a woman but rather more of one; it was her peers who had somehow lost their way. The past, argued Dieulafoy, offered evidence of a gender-fluid ideal.”

In some ways, Rachilde, the subject of Mesch’s second analysis, embodied the gender-fluid ideal championed by Dieulafoy. Having decided as a teenager to assume the persona of a “man of letters” to further her writing career, Rachilde moved to Paris upon reaching the age of legal majority and embarked upon a career of profligacy, beginning with her first original novel, Monsieur Vénus.

Unlike Dieulafoy, however, Rachilde was not uniformly welcomed into French literary circles and tolerated — even celebrated — as someone transcending gender. One of Monsieur Vénus’ central themes was gender uncertainty, which outraged conservative men and women alike.

In an 1885 letter to a friend, Rachilde bemoaned this lack of vision by recounting a conversation with her editor: “‘Your novel is too literary,’ [Rachilde] reports him as saying. ‘Why don’t you have your heroine raped a little?’” One can sense the seething frustration Rachilde experienced as a female author seeking to push boundaries both literary and personal.

Rachilde did, however, have allies in her unusual quest. She married another aspiring writer, Alfred Valette, who supported her writing career and unconventional behavior. Together, they created the literary journal Le Mercure de France and hosted a weekly salon that became famous for its attendees.

“Rachilde’s transition into her complete self was not a crossing over, as it was to a great degree for Jane Dieulafoy,” concludes Mesch. “Rather, it appears to have been a state of constant flux.”

In perhaps an even greater degree of constant flux is Montifaud, the last of Mesch’s subjects. Like Dieulafoy and Rachilde, Montifaud married at a young age (somewhere between 15 and 19); like her counterparts, she may have done so partially to further her literary ambition.

Montifaud’s husband encouraged her writing, even when she was sentenced to prison for some of her more salacious commentary. (In response, Montifaud fled the country, later negotiating for a stay at an infamous insane asylum instead of jail.) Yet her life was perhaps the most conflicted of the three women Mesch examines.

Montifaud’s masculine physical presentation, coupled with a masculine gaze in her art criticism and masculine subject matter in her novels, was not as easily overlooked as that of the effacing Dieulafoy or the mercurial Rachilde. It may be that this was intentional:

“[T]here was likely a psychology to Montifaud’s puzzling behavior, to her seeming provocations, even as she knew the probably results: she was addicted to that danger inherent in her refusals to conform because it was a way to acknowledge an existence that could not otherwise be articulated.”

Certainly, Montifaud remained highly visible for most of her life, escaping several additional charges by going abroad but always returning to continue her work.

Mesch highlights the value of all three women’s contributions to the literary canon from their unique vantage points:

“Dieulafoy’s primary theory was gender-crossing in the service of heroism, while Rachilde imagined herself a double being and tried to understand the relationship between soul and body. Montifaud’s writings, especially her early histories, function differently. Her work was about an undoing.”

With Beyond Trans, Rachel Mesch herself has added to the important body of work about gender studies and women’s rights.

Wannsee: The Road to the Final Solution