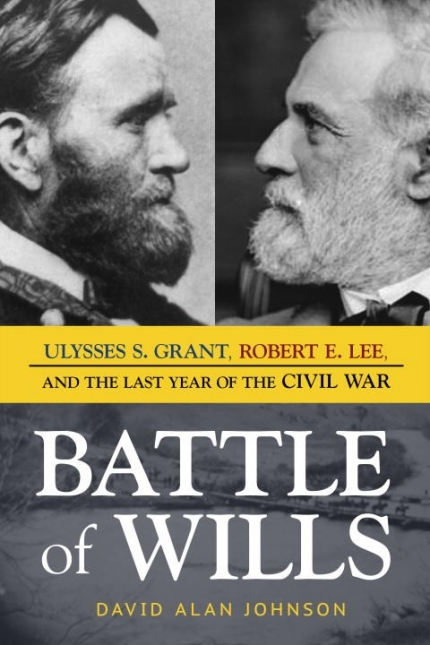 David Alan Johnson's Battle of Wills is a popular history of how the Civil War finally ended, with particular and appropriate emphasis on Ulysses S. Grant and the Army of the Potomac's relentless Overland Campaign.

From the Wilderness Battlefield near Fredericksburg, Virginia, in May 1864 to the final surrender at Wilmer McLean's house near Appomattox Courthouse about a year later, "The war had certainly changed since 1862 when [Robert E. Lee] had first taken command of the Army of Northern Virginia, and General Lee was all too aware of it."

Instead of turning back after being bloodied, as did Irwin McDowell, George McClellan, and John Pope, or hesitating to fall upon a retreating Confederate Army, as did McClellan (again) or George Meade, Grant never let go. In this way, Johnson insists often in this book that Grant was every bit his father's son.

Grant was not an "On to Richmond!" commander. As he had shown in the West, he was intent on destroying armies rather than taking geography. From the early days of the war, Grant demonstrated as much in the attacks on Fort Donelson and Island Number 10, and in the constant shifting of men and guns (and Navy and Army gunboats) to trap the overly confident Confederate commander John Pemberton inside Vicksburg.

Johnson's depiction of the battles of this 1864 campaign is at its strongest in illustrating the lessons Grant learned from the near disaster at Cold Harbor, where he sent charge after charge of hastily trained artillerists to their destruction against entrenched Confederate positions. He also delayed discussions of removing the wounded and the dead from the field because it would be a signal of defeat. The lesson: One more blow was not going to be enough to put an end to the war in Virginia.

While Johnson draws that point out well and describes how Grant slid miles eastward to get to the James River, I wish he had given some detail to the remarkable (for the time) engineering achievement in bridging the river at one of its widest points. Also, since the author crafted his book as the story of a “clash of wills,” he recalls events from both Grant and Lee’s perspectives, creating repetition that slows the storytelling down.

The Overland Campaign was but one part of Grant's larger strategy of destroying Confederate armies to end the war. The other two prongs were aimed at forces led by Joseph Johnston in Georgia and Jubal Early in the Shenandoah Valley. To help him achieve his goals, Grant had, first and foremost, William T. Sherman hounding Johnston's forces, and eventually Philip Sheridan pounding Early's.

But whereas Grant was free to roam, Lee felt "tethered," says the author, to the defense of Richmond, the Confederate capital. While Lee certainly enjoyed Jefferson Davis' confidence, he never pressed the Confederate president to move the government from its fixed location and allow his army to join forces with other units.

"Lee's terrible and crippling sense of duty,” writes Johnson, “would not even allow him to mention the subject." Defending the capital proved a fatal choice for the Confederacy, but it fit Lee’s rigid sense of duty.

Called the "Marble Man," Lee had a personality that was the opposite of his father. A dashing cavalry officer in the Revolutionary War but a rogue of the first order, Henry "Light Horse Harry" Lee played fast and loose with land, debts, and relations. To all who knew the family, the contrast between father and son was striking. Robert was respectful, dutiful to his wife and children, and a brilliant military tactician.

Whether from their shared backgrounds at the U.S. Military Academy or service in the Mexican-American War, Lee knew his adversaries' personalities, their strengths and weaknesses, and, more to the point, what they were likely to do under the stress of combat — with one exception. That was Grant, 15 years Lee’s junior and his social inferior — a Northern tanner's son to a Virginia (if impoverished by his father) aristocrat. Military prowess notwithstanding, the pair could not have been more different, as this book ably chronicles.

Johnson, the author of a number of popular histories, including Decided on the Battlefield: Grant, Sherman, Lincoln, and the Election of 1864, describes the meeting between the two generals at the surrender table, where Grant tries to make small talk about their prior service in the war with Mexico before getting down to the business at hand. "I have always remembered your appearance, and I think I should have recognized you anywhere."

Lee, in reply, is dismissive. "I have often thought of it and tried to recall how you looked, but I have never been able to recall a single feature."

Johnson concludes his book by recounting the extraordinary steps Grant took with President Andrew Johnson to ensure that the terms of surrender were met, an important point in understanding how the war ended.

For readers who want a popular account of the conclusion of the Civil War, Johnson's Battle of Wills is timely and appropriate without becoming lost in the unanswerable question and endless debate over who, Grant or Lee, was the better general.