Back to the Prairie: A Home Remade, A Life Rediscovered 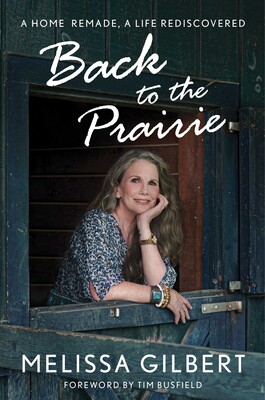 In 2019, Melissa Gilbert and her actor-director husband, Timothy Busfield, dumped their cacophonic, California-New York commute for the quiet of the country. Back to the Prairie: A Home Remade, A Life Rediscovered is the second memoir from the peripatetic Gilbert, who has been an onscreen presence since her 1974 television debut as Michael Landon’s daughter Laura Ingalls on “Little House on the Prairie.”

A multitude of movies and TV projects later, Gilbert and Busfield met in Studio City. He writes in the book’s foreword:

“There was absolutely no anonymity in her life. When we were out, I’d hear the brakes on passing cars screech as people rubbernecked to see the beautiful icon I was sitting next to…and yet she was utterly confused about how to stay on the gerbil wheel of Hollywood. She frequented her Botox specialist as if the doctor’s office were a Starbucks drive-through. She was injected, augmented, and veneered, and doing everything right for an actress closing in on fifty trying to maintain a career as an ingenue.”

Busfield, however, though also a show business success, favored his Michigan lake house over Hollywood. Los Angeles was ideal, but only for movie and television assignments. In 2011, he and Gilbert got reacquainted in a bar. A year later, she relocated to be near him, and — in 2013 — became his wife:

“After Melissa and I found each other, we discovered that we were both craving a life away from the lights and pressures of Hollywood…From the moment she left Detroit Metro Airport and found herself in the Michigan countryside, she melted into her natural self.”

Even so, they continued their junkets to New York and elsewhere for work. They collaborated on “Tenure,” a television pilot, and eventually connected with friend Jeff Daniels to make “Guest Artist,” a feature film that Busfield directed, Gilbert obtained financing for, the trio co-produced, and Daniels starred in. Afterward, Gilbert departed to headline in an Off-Broadway production of “The Dead, 1904” for the Irish Repertory Theatre in New York.

Not long after, on a trip back East, the Busfields stayed overnight in the Catskills — and their infatuation with country living began. In late 2018, they found a small house on 14 acres that was selling for $90,000. Dilapidated and dirty, moldy, and mouse-ridden, malodorous and mildewed, it also lacked heat, a septic tank, and a fully functioning roof. And yet, writes Gilbert:

“Tim’s smile was shining a light on the potential…I saw it, too. I just had to walk around and find it…But it felt good. It had good vibes. The bones were strong and sturdy. It was ready to be turned into a home.”

Two months later, they took possession of their “Cabbage” (“a conflation of cabbage and cottage”). Months of planning, cleaning, mopping, struggling, scrubbing, and repairing followed to convert their getaway into a dream house. Although “we [thought] of all the eventualities that might cause us to…hunker down…for an extended period,” recalls Gilbert, “not once did we consider a pandemic.”

But when covid-19 tore through the country, they kept on renovating. Busfield and Gilbert built a coop and filled it with chickens that supplied them with a daily ration of eggs. They also outsmarted a bear, befriended a deer, and designed a sumptuous, productive garden of tomatoes, green beans, onions, garlic, bok choy, zucchini, and other treats.

Finally, in 2020, the home improvements were completed early thanks to their Thoreauvian-spirited diligence:

“A little more than a year had passed since we took possession [of the Cabbage]…emptied out the previous owner’s belongings, gave it a floor-to-ceiling scrubbing…remodeled and updated. At each juncture, we asked what we needed to live there…true joy and meaning came from the time we spent together working, sweating, freezing, planning, talking…eating, exploring, laughing, and falling into bed at the end of the day exhausted and in love.”

All the while, Busfield had been happily anticipating the debut of a refreshed version of his 1980s drama series, “Thirtysomething.” Rebranded “Thirtysomething (else)” for a modern audience, the show was to start filming, but the pandemic caused the network to cancel its commitment. For good.

It was a huge disappointment, but the rollout of covid-19 vaccines did, at least, swing their “new” lives halfway back to normal — complete with impromptu family forays and visits from gregarious grandchildren.

David Bruce Smith is the author of 13 books and founder of the Grateful American™ Foundation, which is celebrating its seventh year of restoring enthusiasm about American history for kids — and adults — through videos, podcasts, and interactive activities, and the Grateful American™ Book Prize for excellence in children’s historical fiction and nonfiction focused on the United States since the country’s founding.

How America Lost Its Secrets