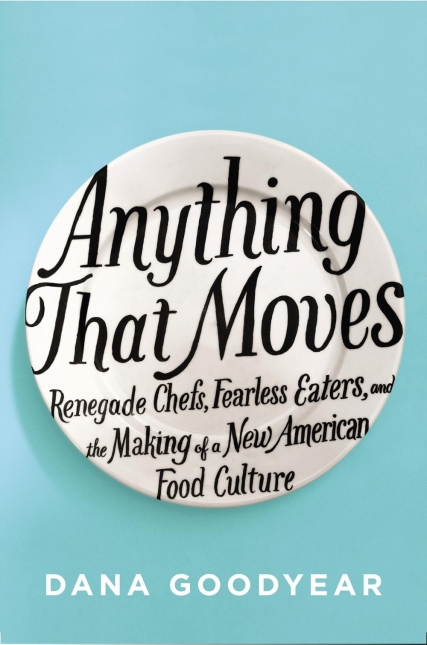 Would you eat a stinkbug? Maybe not, but Dana Goodyear, a staff writer for The New Yorker and author of a new book, Anything That Moves: Renegade Chefs, Fearless Eaters, and the Making of a New American Food Culture, would. In fact, she claims stinkbugs, when fried, taste fruity like an apple and are medicinal.

Even though she is not as fearless as some of the foodies she profiles, like Jonathan Gold, a Pulitzer Prize-winning food writer who likes to eat on the fringe, Goodyear is an adventurous eater, committed to trying anything once. She has the utmost respect for extreme foodies, so fans of Gold’s Los Angeles Times food column, Anthony Bourdain’s “No Reservations”and Andrew Zimmern’s “Bizarre Foods” will be intrigued just by the subject matter in Goodyear’s book. She covers bug eaters; raw milk drinkers; contemporary carnivores, who consume their meat from head to tail; and foodies who will push their palate as far as the law will allow (and sometimes further). Washington, D.C.-ites will appreciate references to their hometown foodies, like José Andrés, who serves a popular grasshopper taco at his restaurant Oyamel.

With a mixture of chefs, adventurous eaters and go-betweens “who are breaking with convention to reshape the American palate,” Goodyear, in Anything That Moves, explores “the outer bounds of food culture” and attempts to answer the question “So is foodie-ism greed or resourcefulness?” The answer, it seems, is a bit of both.

While some chefs and foodies advocate awareness and open-mindedness toward the changing culinary landscape, others rally against government regulation of the food supply. And some are just thrill-seekers or adventurous eaters hungry for something exotic, illegal and/or culturally forbidden.

Anything That Moves is organized into three parts, with chapters that focus on a different segment of extreme foodies. Consisting of different narratives, the chapters work well together but can also stand alone.

One compelling narrative tells of the culinary quest for escamoles (giant ant eggs) that Goodyear goes on with Chef Laurent Quenioux at the urging of Gold. It reads like a Hollywood-style, south-of-the-border drug buy: After asking if Quenioux had come for the escamoles, “a young woman wearing a dirty chef’s coat and white apron” went to get the eggs and “returned a minute later with a plastic shopping bag containing a large ziplock filled with half a kilo of frozen product. Quenioux handed her a hundred-dollar bill.”

Many of the narratives are straight retellings rather than Goodyear’s personal experiences. The chapter entitled “Backdoor Men,” for example, introduces Brett Ottolenghi, a fancy foods purveyor in Las Vegas. Goodyear details Ottolenghi’s foodie history from importing truffles at the age of 13 to selling hard-to-come-by foods to top Las Vegas chefs.

In Chapter 4, “The Rawesome Three,” Goodyear explains the plight of Rawesome Foods, a raw milk business that is raided by the Food and Drug Administration. The story exemplifies the off-the-grid dining that’s popular with extreme foodies, and it illustrates Goodyear’s writing style as well as the book’s structure.

Goodyear, herself, is a player in some of the narratives, but she often rests as a fly on the wall, leaving the reader wondering where she has gone and craving a bit more of her fearless foodie story. Her prose shines when she interjects her personal impressions of unusual foods: She describes a marijuana-infused vodka drink as smelling like “Dorm Room Couch” and depicts Chef Isaiah Frizzell’s red-bell-pepper Dippin’ Dots as “the ghost of nourishment” that has her buying a hot dog from a food truck on the way home.

Anything That Moves is an intriguing examination of America’s extreme food subculture. But a word of caution: This book isn’t for the faint of stomach. You might lose your lunch or your appetite while reading — unless you’re hungry for something completely off the menu.

Shannon Morgan is a freelance writer and editor. She writes for USA Today Travel and its subdivisions, Experience Food and Wine and 10Best.com. Connect with her on Twitter by following @SLDMorgan.