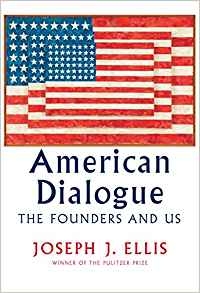 Joseph Ellis and Doris Kearns Goodwin are both 75-year-old Pulitzer Prize-winning historians whose successful careers have come from writing acclaimed biographies. Ellis’ specialty is the Founders, while Goodwin’s is esteemed presidents.

This fall, with at least three times the sand in the bottom of the hourglass compared to what’s on top, they have both decided to make their lifetimes of historical analysis more relevant by expressly connecting the dots between the past and now.

In his new book, American Dialogue: The Founders and Us, Ellis weighs in on how understanding the sweet spots of our first four presidents’ expertise (Washington: foreign policy; Adams: economic inequality; Jefferson: race; and Madison: constitutional interpretation) can shed light on today’s hot-button issues.

Goodwin’s recent effort, Leadership in Turbulent Times (which I reviewed here), brings the past to the forefront by identifying the key leadership traits demonstrated by Lincoln, both Roosevelts, and LBJ during their best days in the White House, and then commending them to today’s leaders.

Ellis’ new book covers subjects he’s well qualified to tackle. He’s written award-winning biographies of Washington, Adams, and Jefferson, and also acclaimed books on the Founders that give major coverage to Madison. In his preface to American Dialogue, he says his “goal is to provide a round-trip ticket to the late eighteenth century, then back to our location in the second decade of the twenty-first.”

To achieve this, he divides his book into four parts: Jefferson and his contradictory perspectives on race; Adams and his awareness of economic inequality’s inevitability in a free society; Madison and his back-and-forth positions on constitutional interpretation; and Washington and his vision for American foreign policy, best exemplified in his Farewell Address.

Each quadrant is divided into “Then” and “Now” sections providing a full review of each president and his specialized field, along with where American thinking is (or where Ellis feels it should be) today. This approach puts the reader in a position to grasp how understanding today’s controversial issues can be enhanced by learning how they were originally dealt with by the smartest guys in the room when the country first began facing its problems.

The book’s premise: “The study of history is an ongoing conversation between past and present…and it was the Founders who established the institutional framework for what is still an ongoing argument about our destiny as a people and a nation.”

With that in mind, the book starts with the country’s thorniest issue — race. Yes, there are many complex problems in recent years associated with there being too many African Americans stuck in poverty, shot by police, and rearing families without fathers (many of whom are in prison). Ellis believes that the analysis of such problems should begin by asking, “How did we get here?” The answer: The conversation on race should begin with understanding how Thomas Jefferson saw things.

As the fellow who wrote “all men are created equal,” and who, for much of his life, publicly denounced slavery, Jefferson somehow managed to look at himself in the mirror while living every day in total conflict with his words.

He owned several-dozen slaves; he fathered many children with a slave; and, as the president who consummated the Louisiana Purchase, he missed a huge opportunity to stop slavery’s expansion into the newly acquired territory. Our country’s current racial situation is a mess, in part, because it began with the insincere words of an egregiously hypocritical man.

How to begin getting our arms around this troubling state of affairs? Start with John Adams, who would not be surprised by it given his advanced understanding of human nature. Adams knew that even if men are born with equal rights, they don’t have equal power, faculties, and influence.

Added to this inconvenient truth is Adams’ assessment that man’s passions will often prevail over his reason, and the dominant human drive is to be noticed and loved, which usually comes more readily to the wealthy and famous. As long as Americans enjoy the freedom to pursue wealth in the marketplace, he believed, the shrewd and ambitious will always derive a disproportionately large piece of the pie.

For his third “Headline News” subject, Ellis addresses the issue of constitutional interpretation that has divided the Supreme Court and, therefore, the country, for the last 40 years. Should the Supreme Law of the Land be viewed solely through the lens of the Founders’ intent as it existed at the end of the 18th century, or was it their intent that the Constitution would be a “living document” that needs to be read in the context of changing times? Who better to answer that question than James Madison, the man recognized as “the Father of the Constitution”?

Ellis reveals that Madison’s understanding of the Constitution changed before and after he signed it, and most of the law’s provisions were agreed upon only after major compromises were made, resulting in the Founders choosing language that was intentionally ambiguous, allowing its interpretation to be capable of moving with the times. Thus, from Ellis’ vantage point, any attempt to derive a clear, steadfast perspective on the Founders’ intent is folly.

For his final still-simmering issue over which reasonable minds have differed for two-and-a-half centuries, Ellis looks to George Washington and his thoughts on foreign policy — most notably, to “avoid foreign entanglements” — which historians have determined “charted the course of American foreign policy for the next century and beyond.”

Washington’s clear vision of America’s proper place in the world certainly conflicts with American foreign policy in the 21st century, which Ellis sees as “adrift, lacking the moral and strategic compass that guided it through the Cold War,” such that our leaders have now “begun to question the nation’s role as chief defender of the world’s order.”

While the author describes President Trump as a “charismatic charlatan with a knack for exploiting fears,” Trump’s attempt to pull America back from the world nonetheless aligns with Ellis’ observation that:

“All empires, like all mortals, must come and go, and the chief reason for their demise is that the world is an inherently unmanageable place that eventually devours the strength of any and all superpowers that history selects for what is, in effect, an impossible mission.”

American Dialogue has arrived on the scene at an optimum time. With polarization ratcheting up with each passing day, and civil discourse becoming almost extinct, it’s a worthwhile exercise to revisit the treasured history of America’s early days as a republic.

Focusing on what our first presidents said and did provides a much-needed breathing exercise for today’s politically overwhelmed reader, which should cause most to accept Joseph Ellis’ ultimate conclusion that, “as a lovely song once put it, the fundamental things apply, as time goes by.”

Talmage Boston is an historian and lawyer in Dallas, Texas, whose most recent book is Cross-Examining History: A Lawyer Gets Answers From the Experts About Our Presidents (Bright Sky Press, 2016).